JDRF Children’s Congress – Advocating for Action on the Hill! 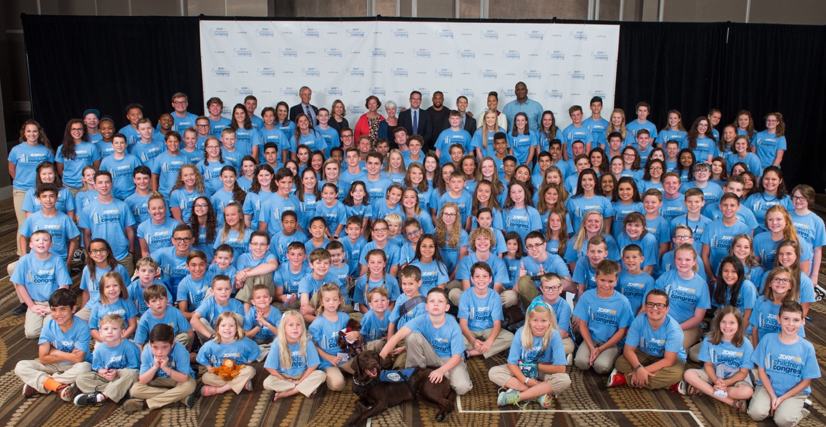 Over 160 children and teens living with type 1 diabetes were selected to travel to Washington D.C. for three days, meeting with politicians and lawmakers to advocate for renewal of the Special Diabetes Program

The JDRF’s Children's Congress brought more than 160 delegates – children and teens living with type 1 diabetes – to Washington D.C. to prepare to make their case for renewal of the Special Diabetes Program (SDP), which currently provides $150 million annually for type 1 diabetes research at the NIH. That funding, along with $150 million in funding for the Special Diabetes Program for Indians (SDPI) is scheduled to end on September 30, so the JDRF’s Children’s Congress is timely.

SDP and SDPI funding in previous years has supported incredible advancements in diabetes technology and research. Advocates also described the enormous success seen by the Indian Health Service and what an economic difference this has made in 35 states across a range of tribes – see this compelling infographic for more on the “sister” SDP program to JDRF’s! What amazing progress to see at both. The Children’s Congress itself has made waves in diabetes progress, including the delegates’ role in advocating for Medicare coverage for CGM.

During the welcome dinner, type 1 diabetes celebrities and guardians found themselves in a sea of delegates in bright blue JDRF Congress t-shirts. JDRF CEO and President Derek Rapp highlighted Senator Susan Collins (NH), who has shown so much leadership in the past several days in Washington. Years ago, Senator Collins shared that she met a 10-year-old boy with type 1, and she was so touched by his story – the boy told her that he just wanted one day off from diabetes (his birthday? Christmas?) – that Collins started the first Diabetes Caucus in the US Senate. What a difference this has made, and how key her work has been with Senator Shaheen from New Hampshire, who spoke so movingly about her granddaughter Elle who is going to college this fall with her dog Coach, trained to sense hypoglycemia.

Dr. Kowalski spoke about the progress made in type 1 diabetes research and how critical the renewal of the Special Diabetes Program (SDP) is. He showed examples of diabetes technology from the past 30 years, and all of the Delegates could see how far we have come in convenience and accuracy. Many in the room remembered the early technology (such as it was) and could express how much the JDRF investments had meant in moving along progress. After giving a thorough description of the SDP and how it funds NIH research to prevent and cure type 1 diabetes, he called for action: "We cannot accept no here ... It's your money. These are your tax dollars." Dr. Kowalski also talked about our own Ms. Kelly Close and our July 21st Consensus Conference, discussing the importance of CGM and how we must move beyond using the A1C as the only metric to assess outcomes for new therapies.

The Blitz Training Sessions ended the day, where Delegates and families trained for the big political ask on Wednesday. The first priority was the renewed of the SDP at the current funding level of $150 million per year. Then, Delegates were to advocate for continued funding of the NIH and FDA, and affirm JDRF’s principles amidst health care reform debates on Capitol Hill. Specifically, the principles included:

Senator Susan Collins chaired the hearing – it was a big deal to see Senator Collins throughout so much of the week and representing strong voices from Maine. As she showed in spades again last week, Senator Collins has been and continues to be a huge advocate for both the Special Diabetes Program (SDP) and the general diabetes community.

Mr. Sparks, the first testifier, discussed the importance of research in diabetes care, and how new advances allow people with diabetes to have some control over their condition. He described how he uses a CGM device and Afrezza inhaled insulin to help manage his diabetes – he met Dr. Aaron Kowalski and saw a CGM for the first time some years back (when they did a Marathon together) and his words were so compelling about when he first saw a CGM “And I found out I could get one of those. It has saved me.”. He provided a demonstrative - and scary - example of the need for and dependence on research: three years ago, Mr. Sparks turned off his CGM so that his pregnant wife could sleep through the night without any beeping. Because he’d switched it off, it did not alert him when he was becoming hypoglycemic, and woke up to a frightened pregnant wife, a crying four-year old, and seven New York City EMT’s standing over him.

Seventeen-year-old Ms. Watt shared a tear-jerking story of her own life with type 1 diabetes. Her father, who had type 1 diabetes, passed away less than one year after her diagnosis at age nine. He didn’t have access to advanced care or technologies, and a difficult series of complications led to his passing. Ms. Watt provided a compelling case for the need for more research and access because, as she said, “no one – including all the kids in this room today – should lose their life because of type 1 diabetes.”

Ten-year-old Mr. Albair furthered these thoughts with his own testimony, where he discussed his developing independence using new technologies. With his friends, he calls the CGM beeps his “natural robot noise.” When he is older, Mr. Albair wants to play for the Boston Red Sox. Though he is able to set high aspirations and embrace his diabetes positively, he still said, “I want my disease to go away – for me and all the other kids who suffer from it. I want us all to be able to live without thinking about it.” And, very coyly, he told the Senators that if they supported the renewal of SDP, he’d invite them all to a game when he is on the Red Sox team! No doubt there was great appeal with the confident young man speaking up.

The charismatic Children’s Congress chair Ms. Angie Platt spoke about her 14-year-old son Jonathan who lives with type 1 diabetes. Jonathan has been on the pivotal 670G trial for over a year now and has been able to play basketball incredibly well even with diabetes. In fact, Ms. Platt said so movingly that she actually had forgotten Jonathan even had diabetes with the 670G – but had been reminded by an early coach and mentor, who remarked upon how clearly well Jonathan was doing. Jonathan was present for the commentary and helped advocates so much everywhere when he answered some questions spontaneously and movingly about the new technology. He and Ms. Platt called for action and more research in care, complications, and prevention. What powerful speakers they both were!

Expert Dr. Rodgers gave a thorough overview of the new technologies and therapies on the horizon in diabetes care, including the bi-hormonal hybrid closed loop system, islet cell encapsulation, and anti-VEGF drugs to treat diabetic macular edema, a diabetes eye disease. We loved listening to him discuss research, especially on eye disease, where there has been so incredibly much advancement.

Overall, this hearing delivered a significant impact to the Senators in attendance. After the hearing, all the Delegates split off to meet with their specific state and county representatives. With young children and teens telling their stories to these representatives, and advocating for the SDP so eloquently and persuasively, JDRF’s Children’s Congress surely made an impression. The SDP has made a difference in advancing diabetes interventions to where they are today and delegates were oh-so-compelling in noting how critical the funds were for current trials, which would end abruptly without the funding and without any results. We hope this impact translates into positive results and a 3-year renewal of SDP in September!