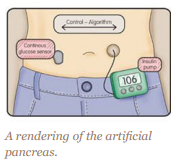 Recently, JDRF has ratcheted up the pressure on the FDA to encourage quicker development and approval of an artificial pancreas (AP) for type 1 diabetes. In late November, JDRF announced 110,000 individuals had signed a petition urging the FDA to avoid unnecessary delays in bringing an AP to market – impressively, the first 100,000 signatures were collected in just 23 days. The petition was focused on the FDA’s upcoming artificial pancreas draft guidance document, which was released (as promised) on December 1. The document represents the Agency’s current thinking on the AP, and sets the stage for the regulatory requirements that artificial pancreas systems will need to adhere to. Examples include clinical trials, device characteristics, and safety provisions. Among other requests, JDRF is calling for the FDA to allow short-term in-hospital evaluation of artificial pancreas systems followed by in-home trials of no more than three months. Following the publication of the guidance, JDRF released a statement that it is “encouraged” by the document and the agency has been responsive to many of the proposed recommendations.

Ultimately, JDRF is concerned that unnecessarily burdensome regulatory requirements will slow or even halt innovation and development of the artificial pancreas. A good example of such regulation is the much-delayed FDA approval of the Medtronic Veo insulin pump/CGM system. The device, which has been available in over 50 countries outside the US since 2009, is the first step toward an artificial pancreas but is still not accessible in America. As a reminder, the Veo can automatically suspend insulin delivery when the device senses (via CGM) that glucose levels have fallen below a threshold (e.g., 70 mg/dl). Recent data indicate that the Veo is particularly useful for reducing exposure to nocturnal hypoglycemia, a serious concern for anyone with type 1 diabetes and a frequent barrier to very tight glycemic control. As we understand it, the major trial to approve the Veo in the US, called the ASPIRE study, is expected to begin soon, meaning FDA approval won’t come until sometime in late 2012 or 2013 at the earliest. For more information on the Medtronic Veo, please see Conference Pearls in diaTribe #28. Fortunately, JDRF believes the recently released guidance lays out a rapid timetable to move from inpatient to outpatient trials – very good news considering the delays in getting the Veo approved.

This JDRF petition comes on the heels of a letter sent to FDA commissioner Dr. Margaret Hamburg from the American Diabetes Association (ADA), the American Association of Diabetes Educators (AADE), the Endocrine Society, and the American Association of Clinical Endocrinologists (AACE). The letter similarly focused on the upcoming AP draft guidance, urging the FDA to adopt recommendations previously put forth by the JDRF and leading clinicians. These recommendations included a call for greater flexibility, shorter trials, and a commitment to using CGM data to evaluate artificial pancreas systems (as opposed to more involved laboratory blood glucose measurements). We are glad to see these organizations working together to influence the FDA in the old grassroots sort of way, and based on early indications, it appears the FDA took the recommendations seriously in the the released guidance document. They are going right to the top of the food chain, and considering the combined clout of all four organizations, it’s hard to imagine the FDA not taking these recommendations seriously.

Finally, JDRF also took out a full-page advertisement in the New York Times and Washington Post on November 2. The advertisement calls attention to the dangers of fatal hypoglycemia and notes that the FDA’s upcoming AP guidance will play an important role in bringing a life-saving artificial pancreas to market. The advertisement was somewhat controversial, as it shows a picture of an eight-year-old with type 1 diabetes and asserts that one in twenty people like her will die from low blood sugar. We were initially surprised by the startling figure cited in the ad, but JDRF CEO Jeffrey Brewer clarified it’s based on studies by Dr. Phillip Cryer, a highly regarded hypoglycemia researcher and scholar. We think that the statistic could be misread to imply that one in twenty people with type 1 diabetes die of hypoglycemia every year or in childhood, rather than over the course of their lifetimes, during which time everyone will die of something. That said, we believe the ad was ultimately very valuable as it prompted many discussions about hypoglycemia and associated dangers and clearly raised the education level. We agree with the JDRF that any death that could be prevented with an artificial pancreas is unacceptable, and we look forward to greater awareness and collaboration now that a well thought-out FDA guidance document has been released. –AB