Launches in the next 12-18 months. What we’re excited about…!

J&J recently held an informative meeting for its investors, highlighting some of its key pipeline projects in diabetes. Two updates were particularly exciting, with new information on its newly named “OneTouch Via” (previously Calibra Finesse) mealtime insulin delivery device, as well as the development of its automated insulin delivery (“artificial pancreas”) device, in partnership with Dexcom. Read below to learn more! We are so excited about all this momentum and progress – the most in the last five years for J&J (except its SGLT-2 Invokana!). 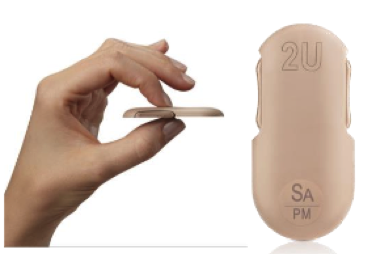 J&J’s “OneTouch Via” (the former Calibra Finesse) has an expected launch within the “next 12 months” – it will be commercially available in select US markets by late 2016, with greater availability to come in 2017. This launch timeline is a bit later than previously thought (“2016”), as the product will need to be resubmitted to the FDA. The OneTouch Via would be a first-of-its-kind product, creating an exciting new approach for mealtime insulin delivery.

Have you seen pictures of this yet? It looks very cool (see the above photo!). The Via is a very slim, plastic device worn on the skin for up to three days. It can hold up to 200 units of fast-acting insulin (Humalog, NovoLog), and allows the wearer to take boluses in two-unit increments by pressing two buttons simultaneously — including through clothing so no one can see when you’re dosing. The OneTouch Via is completely mechanical — no handheld controller, displays, batteries, or memory – so the cost should be relatively low, though this is a guess on our end as no details are currently available. The Via’s big highlight is its small size – it is just a quarter of an inch thick, two inches long, and one inch wide, making it much more discreet than traditional insulin pumps or using pens or syringes. The Via does not give a basal rate of insulin, meaning those on multiple daily injections (MDI) still take their basal injection (e.g. Lantus, Levemir, Toujeo, Tresiba) through their regular pens or syringes.

The Via will be geared at both people with type 1 and type 2 diabetes – originally, this was viewed as a type 2 product, but many with type 1 diabetes may become excited about using the product for conveniently delivering insulin at meals. We assume that would be mostly people using pens or syringes.

J&J also announced for the first time that two other OneTouch Via products are in development: a “smart” version with connectivity, and a larger reservoir version. We also believe that the company is looking at a one-unit bolus version, more suited for many type 1s.

As 57% of people with type 2 diabetes skip mealtime insulin doses on a consistent basis (in part due to stigma), it is encouraging to see new options for insulin delivery. J&J is currently conducting a clinical trial (still recruiting!) that will show the Via’s impact on A1c, time-in-range, and patient satisfaction – find out more information here. 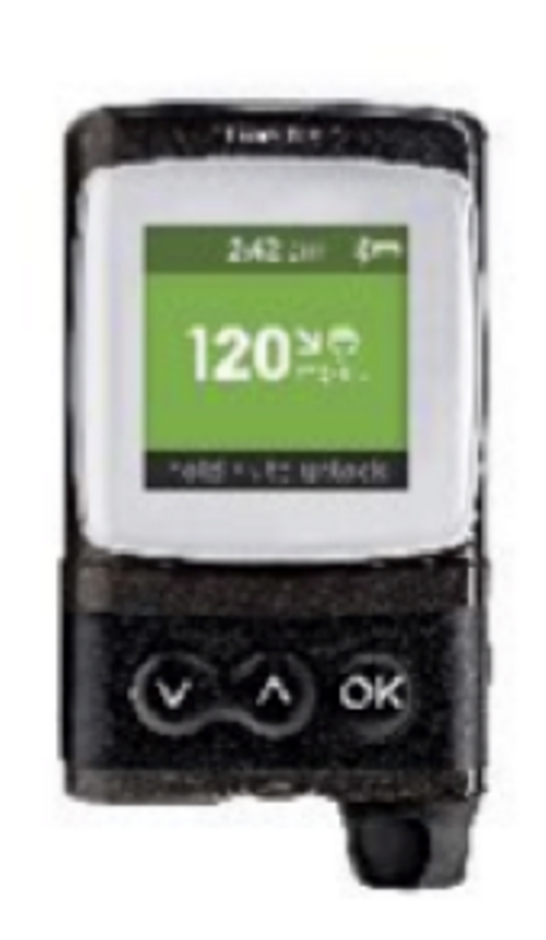 J&J also announced that a launch of the long-awaited automated insulin delivery device with Dexcom CGM is expected in the next 18-24 months, with a pivotal trial set to start by the end of the year. This is the most specific launch timing ever given, implying a US launch potentially before November of 2017 (this is our speculation). This launch date puts it shortly behind Medtronic’s MiniMed 670G hybrid closed-loop system, which could launch by April 2017 (the pivotal study is now complete).

J&J said that this device will automate insulin delivery to minimize both hypoglycemia and hyperglycemia, and slides showed the first-ever picture of the planned commercial device: an Animas Vibe-looking pump re-oriented vertically (see photo). The display showed a bright green screen (presumably to indicate an in-range glucose value) with the current CGM value and trend arrow. The vertical orientation follows the MiniMed 670G, though this home screen looks simpler and easier to read – of course, it’s hard to know until we see the device in more detail. We hope to hear more details on this long-awaited product at J&J’s ADA 2016 symposium in June!