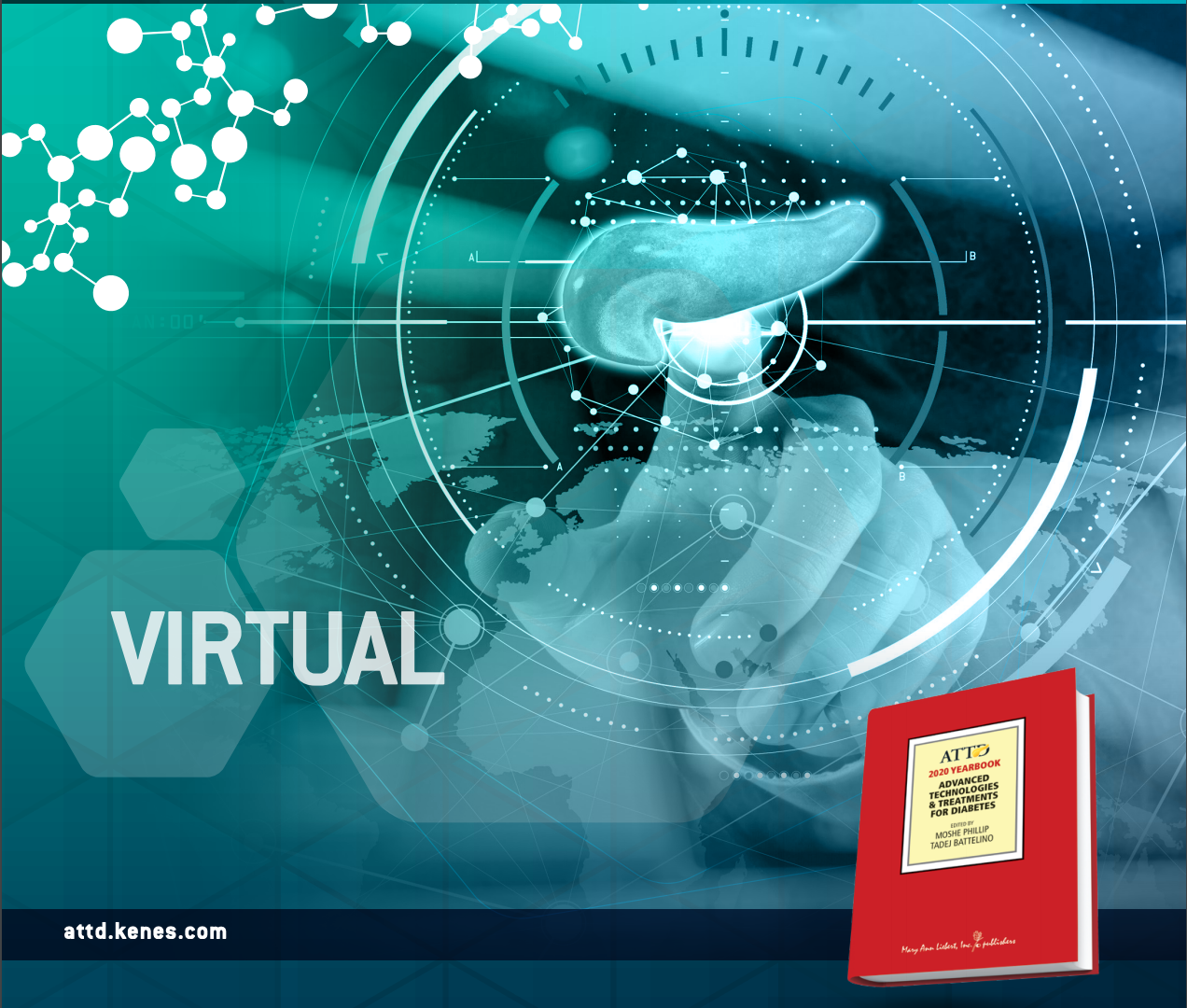 From automated insulin delivery to therapeutic advances to glucose management during COVID-19, read our full coverage of one of the biggest international virtual diabetes conferences this year.

The diaTribe team brings you the most exciting and inspiring updates in diabetes technology from the 14th annual Advanced Technologies and Treatments in Diabetes (ATTD) international conference. After four days packed with real-world data, new results, and cutting-edge technology, here are our top highlights from the conference – and check out our breaking news coverage from day one.

Dr. Steph Habib presented interim results from the ongoing real-world Control-IQ Observational (CLIO) Study. Control-IQ is an automated insulin delivery (AID) system that combines Tandem’s t:slim X2 pump, Dexcom’s G6 continuous glucose monitor (CGM), and an insulin adjustment algorithm; it launched in the US in January 2020. The study included data from 700 people with type 1 diabetes on Control-IQ (59% female, 87% White, median age of 39). At the start of the trial, 89% of participants were CGM users and 80% were pump users. After three months, participants:

These results are similar to the one-year real-world data published in April 2021.

The CLIO Study also shows significant improvements in participants’ quality of life after three months on Control-IQ. Participants reported greater satisfaction with their insulin delivery device and its impact on their diabetes management, as well as a significant reduction in the perceived negative impact of diabetes. Likewise, nearly all participants (96%) reported improved sleep quality after three months of Control-IQ use – about 55% of them reported good or very good sleep, up from about 20% at the start of the trial.

To learn more about the personal experience of using Control-IQ read Cherise Shockley’s “Considering Control-IQ? Why I Made the Switch.”

Dr. Garcia-Tirado and his team at University of Virginia tested the RocketAP system in a small clinical trial of 18 adolescents with type 1 diabetes. Participants used Tandem insulin pumps and Dexcom G6 CGMs and were randomly assigned to either the RocketAP or Control-IQ algorithms. They used the systems for two days; on the first day all participants bloused insulin and ate identical meals. On the second day, the meals were repeated, but participants did not bolus for these meals. Participants then switched to the opposite system and repeated the process.

The results were impressive and could indicate the first steps toward a fully closed loop algorithm (an AID system that doesn’t require the user to announce or self-bolus any meals):

In our day one coverage of ATTD we shared Dr. Tom Martens’ exciting presentation on the results from the MOBILE study, which looked at the effects of continuous glucose monitoring (CGM) in adults with type 2 diabetes on basal insulin. At the start of the trial, the 175 participants had an average A1C of 9.1%, were being treated mainly in a primary care setting, took one to two injections of basal insulin per day, and had never used a CGM before. Participants were randomly assigned to use either a Dexcom G6 CGM or a One Touch Verio Flex blood glucose meter (BGM) for eight months, meeting with healthcare professionals throughout this period both in person and virtually.

After eight months, those using the CGM:

Especially impressive about this trial was the appropriate enrollment of a diverse population – the majority of the participants were people of color and didn’t have a college degree or private health insurance. Given the prevalence of diabetes in these communities, the enrollment by this trial was particularly noteworthy.

"All in all, this represents a huge step forward and the entire group of investigators and staff should be commended. In my mind CGM is a must for all people on insulin, from basal insulin through MDI and insulin pumps, for people with type 1 and type 2 diabetes. Now we have to figure out how to use CGM even more effectively. And make sure all our patients with diabetes have access to the resources they need," said Dr. Anne Peters, Director of the USC Clinical Diabetes Programs.

A few days later, we received even more data from MOBILE: a sneak peek at the results from a six-month extension study. During this extension phase, half of the people from the CGM group continued to wear CGM for six more months while the other half went back to using a BGM. From the BGM group, 55 participants continued using BGM for the extension study. Preliminary results show that when the participants discontinued CGM use, their TIR decreased and their A1C increased – highlighting that the benefits of using a CGM disappear when the device is taken away.

Of note, participants on MDI prior to starting Omnipod DASH saw greater A1C reductions than those who were previously using an insulin pump.

Several short presentations discussed important research on the awareness and adoption of diabetes technology in specific groups of people with diabetes. Though the use of diabetes technology like CGMs, insulin pumps, and automated insulin delivery (AID) systems often has major benefits and can help people manage their diabetes with greater ease and success, it is important to remember that there are unique challenges to the use of diabetes technology in certain populations. Healthcare professionals should do their best to recognize and work with people with diabetes who may face additional challenges to accessing and adopting these tools.

Dr. Shana Mencher presented on the significant racial disparities in the adoption of diabetes technology evident among African American youth. To better understand this important health equity issue, researchers analyzed how African American youth with type 1 diabetes and their caregivers approach decisions about using diabetes technology to help understand why these disparities occur and how they can be addressed.

Dr. Lilli Priesterroth presented on the benefits and barriers of using diabetes technology in people with type 1 diabetes and dysfunctional and disordered eating. Though research on this topic is limited, studies found that:

Dr. Steven Nissen presented the latest clinical trial results on tirzepatide, a new glucose-lowering combination drug (a “dual GIP and GLP-1 agonist”) for people with type 2 diabetes. Tirzepatide combines two types of drugs into a once-weekly injectable medication. Dr. Nissen discussed several recent trials (SURPASS-1, SURPASS-2, SURPASS-3, and SURPASS-5) that investigated 5 mg, 10 mg, and 15 mg doses of tirzepatide over 40 or 52 weeks. Collectively, the results showed that tirzepatide reduced A1C by 1.8 to 2.5 percentage points and led to weight loss between 15 and 25 pounds. Though there were some side effects such as nausea and diarrhea, Dr. Nissen explained how slowly adjusting the dose could help reduce these adverse effects. While there is not enough data to confirm this, based on his clinical experience Dr. Nissen believes there is a high likelihood that tirzepatide also supports heart health.

On the technology front, Dr. Richard Bergenstal described the benefits of remote and connected care in type 2 diabetes management. He presented results from the MOBILE study, which compared CGM and BGM use among people with type 2 diabetes – read coverage of the exciting results above.

In addition to increasing the adoption of CGM, Dr. Bergenstal called for efforts to collect and store diabetes data in one centralized location. According to Dr. Bergenstal, only 71% of people with diabetes at the International Diabetes Center are reaching their A1C targets. He believes that one solution is to have people’s data automatically uploaded to their electronic health record and reported in a standardized way. The Ambulatory Glucose Profile (AGP) report, which helped standardize CGM reporting, is being widely used by people with diabetes and healthcare teams. Dr. Bergenstal concluded his presentation by describing the future of Artificial Intelligence (AI) in guiding food and therapeutic decision-making. By analyzing previous glucose data and trends, AI could potentially provide people with personalized food and treatment recommendations.

In related news, Dr. Osagie Ebekozien presented an analysis of 794 people with type 1 diabetes in the T1D Exchange COVID-19 registry. Of the group, 63% were using a CGM and 47% were using an insulin pump. The average A1C of those using a CGM was 7.9% (compared to 9.5% for those not using a CGM) and for those using an insulin pump, it was 7.8% (compared to 9.1% for those who were not). The majority of individuals using these devices were privately insured (67% of CGM users and 72% of pump users).

The analysis revealed drastic differences in COVID-19 outcomes between those using diabetes technology and those who were not.

Prof. Thomas Danne presented ten years of data from the SWEET project to illuminate new understandings in pediatric diabetes. The data were collected from 2008 to 2018 and included 13,654 youth with type 1 diabetes.

How healthcare professionals can strengthen the diabetes online community

The diabetes online community (DOC) started as a place where people with diabetes could communicate with one another. As the DOC has grown over the last 30 years, healthcare professionals and industry leaders have also found ways to connect with others in the diabetes space. Companies create community forums to build awareness of products, while researchers share data and findings with the world. At an engaging session this year at ATTD, several leaders in diabetes shared insights on social media support, building community, and the role of healthcare professionals in the DOC: