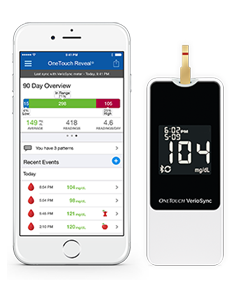 In important news for diabetes data, LifeScan recently announced that its “Reveal” smartphone app will now post data to Apple’s Health app. That means glucose data from the Bluetooth-enabled OneTouch VerioSync meter can now be shared with other diabetes and health apps on the iPhone automatically in the background.

Why does that matter? Diabetes apps like Glooko, mySugr, Meal Memory, and OneDrop can combine those VerioSync meter readings with other data (e.g., exercise, meals, insulin doses, etc.), providing a more holistic view of someone’s diabetes management. In the future, even better analysis features in these apps will hopefully transform all that data into something highly actionable (e.g., insulin dosing advice). Sharing device data with platforms like Apple Health is the first step towards achieving this vision.

This news makes the VerioSync the first of the “Big 4” meters (J&J LifeScan, Roche Accu-Chek, Abbott FreeStyle, and Bayer) to share glucose data to Apple Health, and we hope other companies follow suit. Dexcom has been a leader on sharing device data – its G4 Share receiver and paired app began sending data in March.

The lack of Apple Health integration was a common criticism of the Reveal app in patient product reviews, and it’s encouraging to see LifeScan responding to user feedback. Creating diabetes apps to compete with the user experience of tech giants like Facebook and Google is a tall order, particularly given the regulatory hurdles for medical apps. Diabetes apps are still in the early stages, but we are optimistic that the landscape is changing as more devices get connected and more companies choose to share the data with partners.

In tandem with this announcement, LifeScan donated 1.3 million strips to IDF’s Life for a Child program, which provides resources and diabetes supplies for children with diabetes in developing countries. LifeScan has supported Life for a Child since 2004, helping to raise awareness for these highest-need, most vulnerable populations. -AB/AJW