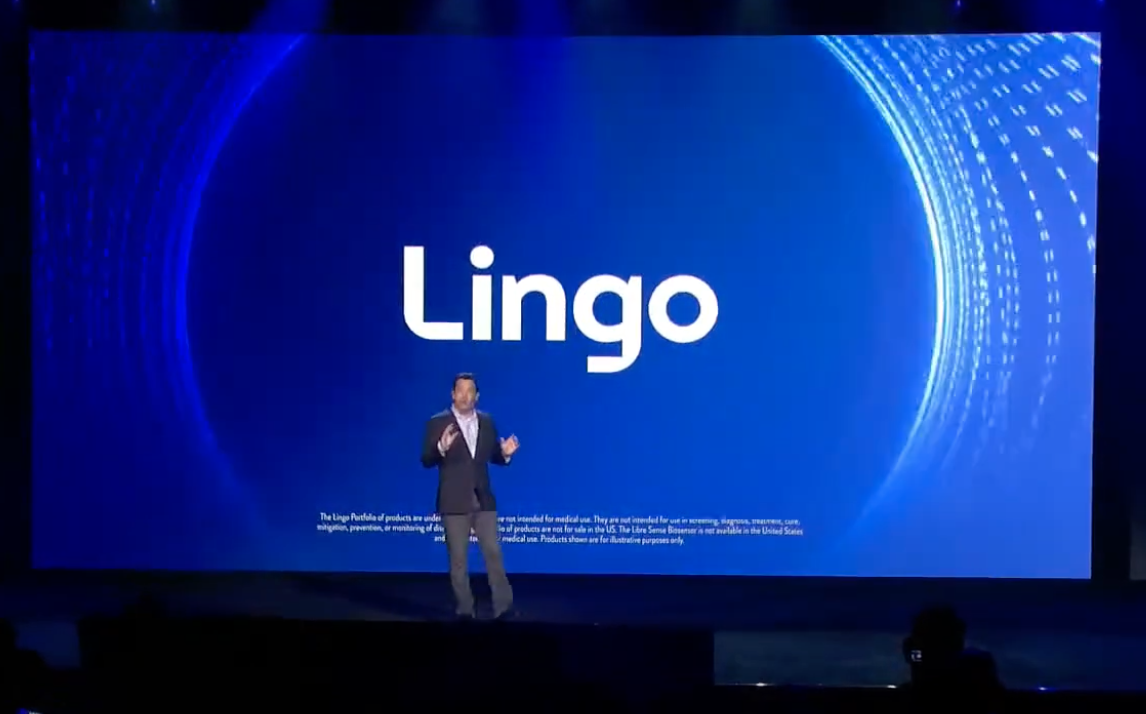 Abbott Laboratories just announced its new category of wearable technology – called Lingo – that will have the ability to track glucose, ketones, lactate, and alcohol. This small sensor is not intended for use by people with diabetes and not yet available for purchase.

As part of its keynote address at the Consumer Electronics Show (CES) in Las Vegas, Abbott announced the development of a category of wearable biosensors called Lingo coming soon. These sensors, which look very similar to its current Freestyle Libre sensor based on images shown during the presentation, are being designed to track a person’s glucose, ketones, lactate, and alcohol levels on their smartphone.

“Diabetes was our first priority, and we wanted to get it right,” said Abbott CEO Robert Ford in the keynote address. “Now we have the evidence, and the expertise, that comes from three and a half million users [of the Freestyle Libre], and we’re going to take it to the next level.”

The four measurements they are focusing on initially are key markers of a person’s metabolic health. The goal of Lingo is to provide extensive meaningful insights on a person’s metabolism to help those without diabetes make better health, nutrition, and exercise decisions.

“It’s amazing what our bodies can tell us,” said Ford. “With Lingo, it’s expected that you’ll understand what your body really needs and what’s good for you. Your body is constantly talking to you, and now it’s time to listen.”

It is interesting to see the groundwork being built for technology that could eventually have a major impact on the lives of those with diabetes. Notably, though these sensors are an expansion beyond Abbot’s Freestyle Libre technology they are not intended for people with diabetes, nor should they be used to influence medical decisions.

For example, the ketone monitor would help track ketones continuously. For people without diabetes, this could help alert people when they are in ketosis. Ketosis is a normal body process that happens when the body doesn’t have enough carbohydrates (such as when you are on a low-carb diet or when fasting), so it breaks down fat into ketones for energy. Ketosis is not dangerous so long as the levels of ketones in the blood stay low. In people with diabetes who require insulin however, when ketone levels get too high and there is not enough insulin in the body, it can lead to a serious condition called ketoacidosis or diabetic ketoacidosis (DKA).

The ketone monitor is initially being designed for the person without diabetes and is focused on identifying states of ketosis for insights into diet and exercise. However, someday, the technology may evolve into a continuous ketone monitor that could alert people with diabetes when they are approaching DKA.

The Lingo products are still in development and Abbott did not share a specific timeline for when they expect these devices to be available for purchase.

Matthew Garza
Matthew Garza joined the diaTribe Foundation in 2020 after graduating with honors from Johns Hopkins University’s Whiting School of Engineering where he majored in Biomedical Engineering and minored in the... Read the full bio »