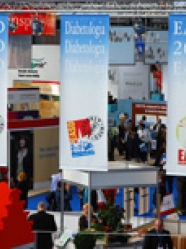 We will be back next issue with more from the Diabetes Technology meeting - in the meantime, we describe below our impression of the keynote talk from Dr. Richard Kahn, Chief Scientific and Medical Officer of the ADA.

European Association For The Study Of Diabetes (Amsterdam, September 17th-21st, 2007)

In September, the diaTribe team traveled to Amsterdam to attend the 43rd Annual Meeting of the European Association for the Study of Diabetes (EASD). This year, it attracted over 14,500 participants. Compared to its American counterpart, the annual meeting of the American Diabetes Association (ADA), EASD was most focused on basic science and insulin therapy. See below for our EASD Pearls.

This year's AADE in August in St. Louis was extremely educational, as always. We tip our hats to the organizers for putting together an amazing faculty of speakers - especially for the well-attended general sessions that set the tone for four days of insights.

The Taking Control of Your Diabetes (TCOYD) Conference was held on September 15th 2007, in Santa Clara, CA. From Hawaii to Minneapolis, our very own advisory board member, Dr. Edelman and his team hold about a dozen TCOYD meetings every year - the biggest one in San Diego (on December 8 this year).