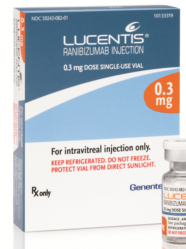 Many people with diabetes fear eye diseases leading to blindness. In diabetic macular edema (DME), the leading cause of blindness among working-age Americans (over 560,000 cases of DME in the US), damaged blood vessels leak fluid into the part of the eye responsible for sharp, straight-ahead vision (the macula), causing blurry vision and ultimately blindness in some cases. Until now, the only approved treatment for DME in the US was laser surgery, which could halt the progression of vision loss but could not reverse the damage (for more information on DME and laser surgery, see new now next in diaTribe #37).

Encouragingly, the FDA approved Lucentis (ranibizumab; manufactured by Roche’s Genentech) for the treatment of DME on August 10, making it the first FDA-approved drug for the condition. The Agency took the advice of a July 26 FDA advisory committee that voted unanimously in favor of its approval. Lucentis is a once-monthly injection directly into the eye and was previously approved for the treatment of DME in Europe and Canada in late 2011  (see new now next in diaTribe #37). In clinical studies, Lucentis improved eyesight for people with DME just one week after the first injection. Over a two-year period, treatment with Lucentis allowed individuals (on average) to read an additional two lines on an eye chart, a meaningful improvement. The drug was generally safe and well-tolerated in these trials; the major downside seems to be its cost – $1,170 per shot, before insurance. Avastin, a similar drug approved for cancer treatment, is already used off-label to treat DME. Although it is significantly cheaper than Lucentis, its safety and effectiveness have not been thoroughly investigated specifically for the treatment of DME. We hope that insurance companies will begin covering Lucentis, which would give more people access to this new treatment. Encouragingly, Genentech has a patient assistance program at www.genentech-access.com/Lucentis for individuals whose insurance does not cover the drug. –AW/JD