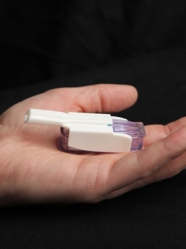 On August 14, MannKind reported phase 3 results for the ultra-rapid-acting inhaled insulin, Afrezza. Afrezza was tested in two large 24-week trials in both type 1 and type 2 diabetes. It showed benefits for A1c in type 2 patients, fasting glucose in type 1 and type 2, and hypoglycemia and weight in type 1. MannKind plans to submit Afrezza to the FDA around October, and with an expected six-month FDA review, an approval could potentially come in March or April 2014. However, there may also be an “advisory committee” meeting, which could delay the FDA’s decision.

In the type 2 trial, 353 patients on one or more pills for diabetes were placed into two groups: those using Afrezza inhaled insulin or an inhaled placebo powder (the control group). After 24 weeks, those on Afrezza experienced a 0.8% decline in A1c compared to 0.4% in the control group. However, the group on Afrezza also experienced about twice as much hypoglycemia as those in the control group (67% vs. 30%) – we speculate that perhaps participants’ oral medications were not changed to reflect the addition of the ultra-rapid-acting insulin; the company has not yet shared the full results of the study.

In the type 1 trial, 518 patients continued on their normal basal insulin and then were randomized to either use ultra-rapid-acting Afrezza or Novolog. The study showed that Afrezza and Novolog were comparable: A1c declined by 0.2% in people using Afrezza compared to 0.4% in the group taking Novolog (which is not a statistically significant difference). However, the group taking Afrezza experienced other benefits, including 42% less total hypoglycemia, a significant improvement in fasting blood glucose (-25 mg/dl with Afrezza vs. +10 mg/dl on Novolog), and about 1 pound of weight loss (vs. 2 pounds of weight gain with Novolog). This is notable for an insulin, which usually results in weight gain.

The trial did not reveal any serious safety concerns with Afrezza. The most common side effect was a cough, occurring in 20-30% of patients taking Afrezza (usually within 10 minutes of inhalation) while none of the patients on Novolog experienced this side effect. People using Afrezza also had a small decrease in lung function, which went away after the study. MannKind has now studied Afrezza in over 4,000 patients and has consistently seen these safety findings.

Overall, we find the phase 3 data to be promising and look forward an inhaled insulin that is easy for patients to use (this was not the case for the inhaled insulin, Exubera, which was approved in 2006 and later removed from the market). Notably, Afrezza is ultra-rapid-acting and peaks in just 12-14 minutes (vs. a typical 60-90 minutes with Humalog, Novolog, and Apidra), meaning that many patients may find post-meal glucose levels are easier to control with Afrezza. Nearly 50% of all type 2 patients are not at goal, while fewer than 30% take insulin – so we’re eager to see more alternatives to injectable insulin. In its first generation, we see this product as more suitable for patients with type 2 diabetes, since the unit measure for each “dose” is equal to about three or four units of insulin – that may work for some type 1 patients and certain meals, but others will find this too large a dose. There is also interest in using Afrezza in the artificial pancreas – it could help control post meal hyperglycemia, which is one of the most challenging issues for an artificial pancreas system.  –NL/AB/KC