By Adam Brown and Alexander Wolf

Josh Airth, a 17-year old with type 1 diabetes, recently participated in a clinical trial of the Medtronic 670G “hybrid-closed loop” system (insulin pump + Enlite 3 CGM sensor). We had the opportunity to ask Josh questions about his experience on the 670G, which is the first direct patient testimony we’ve heard so far about this innovative technology. As a reminder, we learned in January that Medtronic hopes to launch this pump and CGM system in the US by April 2017 – a lot of things will have to go right to reach this goal, that is for sure!

Based on the Enlite 3 CGM reading every five minutes, the 670G pump’s software automatically increases/decreases basal insulin delivery to target a blood glucose of 120 mg/dl. The 670G algorithm is fully integrated within the pump itself, so a patient only needs to wear the Enlite 3 CGM sensor and the MiniMed 670G pump – no need to carry a separate CGM receiver. One last important point: the 670G is considered a “hybrid-closed loop,” as a user still needs to bolus for meals and notify the system of exercise. Otherwise, it mostly takes care of insulin dosing in the background, which is particularly valuable at night. 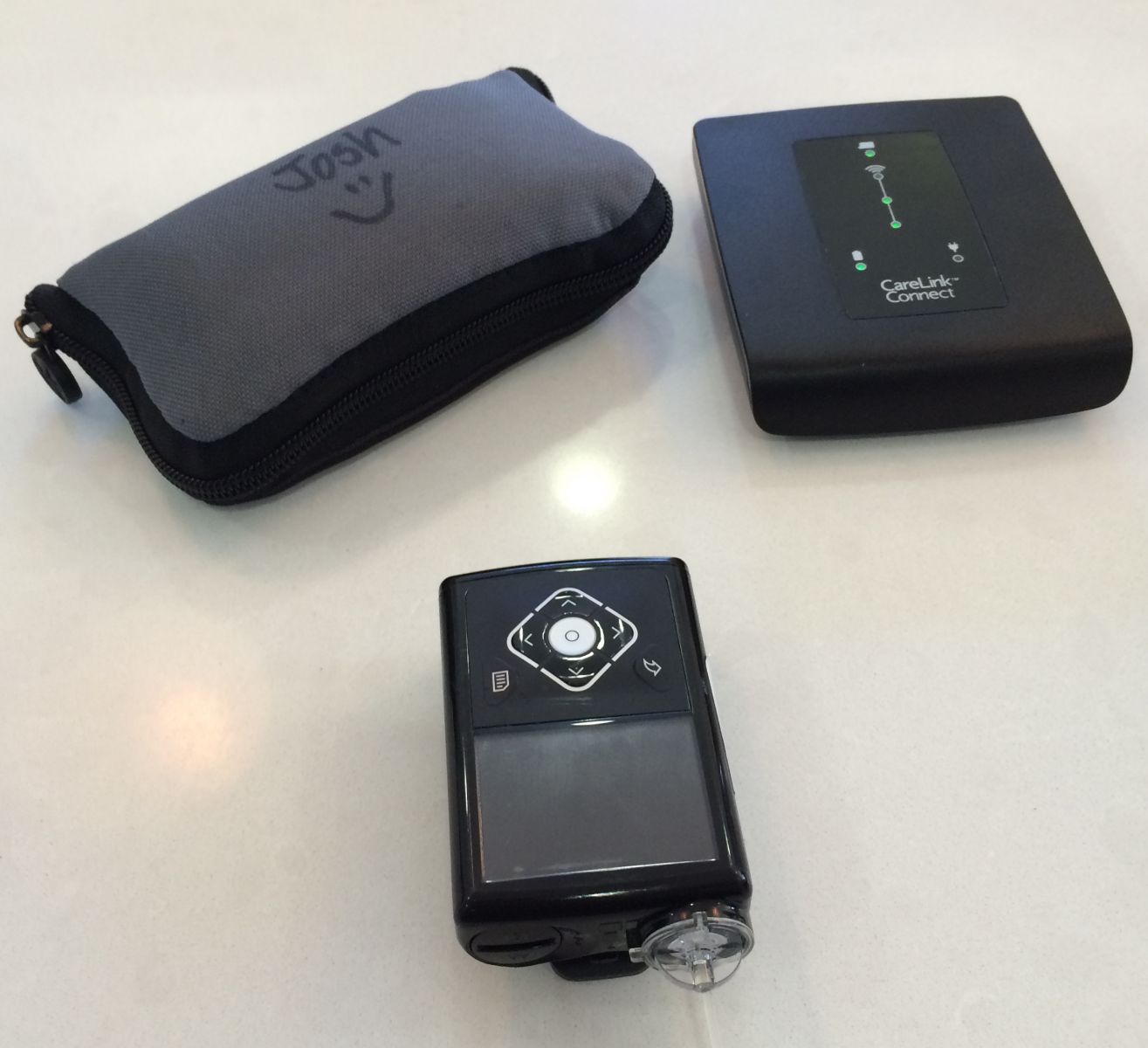 The clinical trial took place in a “study house” near Stanford University, where five adolescent participants wore the 670G for three days and three nights under the supervision of a research team. For safety, participants also carried a small box (“Carelink Connect”) around, which wirelessly sent all the information from the pump to a website monitored by the researchers. Otherwise, the trial was fairly real world, allowing participants to eat and move as they pleased. Josh’s reflections on the trial are enclosed below, which exhibit his own personal experience with the 670G .

ADAM: What was the best part of using the system?

JOSH: Overall, if you think of a diabetic’s blood glucose (on a graph) going up and dropping, going up and dropping, etc. – the pump with the Enlite 3 sensor took those numbers and tightened the margins horizontally and vertically. It led to fewer highs and lows, and also made them shorter – the CGM graph looked more like rolling waves and not a cardiac monitor. Within the three and a half days that I was using the closed loop portion, my blood glucose didn't go above 210 or below 60. ALEX: What was the most challenging part of using the system?

JOSH: I think the most challenging part of the pump was the Enlite 3 sensor. The sensor was very “sensitive,” so we had to make sure we would only calibrate when our numbers were trending flat so they weren’t rising or falling. If we did calibrate the sensors when the glucose was trending up or down, the CGM wasn’t as accurate as the meter, since there is a little bit of a lag between the meter and sensor.

ADAM: What surprised you the most?

JOSH: I think I was surprised the most with the overall closed-loop portion. To operate the closed-loop portion, you had a target number programmed into the pump. It was generally 120, except for exercise, when we would program it to 160. All we had to do was check blood glucose levels and bolus for our carbs – the closed loop would do the rest by giving us the mini boluses and adjusting our basal rates to keep our blood glucoses in our target range.

ALEX: How did it perform during the daytime?

JOSH: I personally have a tendency to run high, especially after I eat, but the closed loop system did a really good job at keeping the blood sugars in the target range. A couple times if I was running above the target range (120+), it would tell me to do a correction bolus, but besides that it would generally keep me around the target range. During the day when we would exercise, it was very useful to have the option to set our target glucose to 160 so we wouldn’t drop low. [Editor’s Note: The 670G, unlike other hybrid closed loop systems, does not give automatic correction boluses. When a meter blood glucose value is above target, the system will prompt the user to take a correction bolus. In this version of the algorithm, the correction bolus is based on a target of 150, and the algorithm recommends the proper amount of insulin to give.]

ADAM: How did it perform at night?

JOSH: The nighttime was when I was the most impressed with system. I think one night I dropped low and the pump did alarm to wake me, but besides that the nights were the best. My BG's did not move around from my target range +/- 30 mg/dl. ALEX: Did the 670G system have a lot of alarms?

JOSH: The only alarms it had were High BG's, Low BG's, calibrate sensor, low battery, and low reservoir. Sometimes it would also alarm when it would not like the number you entered to calibrate the sensor – that happened if the number from your meter was far off from the CGM.

ADAM: Did you find it difficult to adjust to the system doing a lot of the work, especially during the daytime?

JOSH: Not at all. I mean, you definitely had to get used to it, since it is something new, but nothing out of the ordinary.

ALEX: Did you find the 670G reduced the amount of time you spend on diabetes?

JOSH: I don’t think that it reduced the amount of time I spent managing my diabetes. I took the same time I did regularly, but I could definitely tell my control was better than from using my regular pump.

ADAM: If you had to suggest one improvement to the 670G, what would it be?

JOSH: The 670G was amazing and I honestly can’t think of something that was bad about it. The Enlite 3 Sensor could definitely use a little work.