Medtronic and Bayer Launch the Contour Next Link 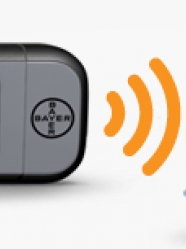 In September, Medtronic and Bayer announced that Bayer's Contour Next Link meter became available to patients ordering new Medtronic Paradigm Revel insulin pumps and Guardian Real-Time CGMs. As a reminder, the new meter wirelessly transmits blood glucose values to the Paradigm Revel pump or the Guardian Real-Time CGM. It uses Bayer's new Contour Next strips and has a form factor and design similar to the Contour USB (essentially a blood glucose meter built in to a USB thumb drive). We got an up close look at the Contour Next Link in Medtronic's AADE 2012 booth and noticed, in addition to the reportedly greater accuracy, the integrated Medtronic CareLink USB stick (allowing upload of pump, CGM, and blood glucose meter data to Medtronic’s web-based CareLink platform), the color screen, and the easy tagging of results. Existing Medtronic customers that are not planning on getting a new pump or CGM will eventually be provided with the Contour Next Link, though they will not be contacted by Medtronic until January 2013. —AB