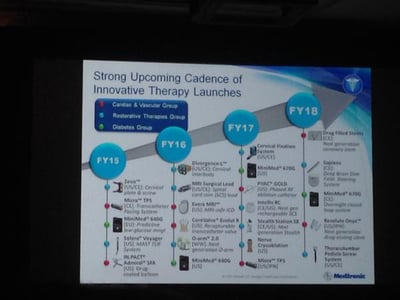 Update (1/12/15): Medtronic Diabetes gave an update on their upcoming diabetes device pipeline at the J.P. Morgan Healthcare Conference. The MiniMed 640G is expected to be in the US by April 2016, and a hybrid closed loop system (the MiniMed 670G) is expected by April 2017! 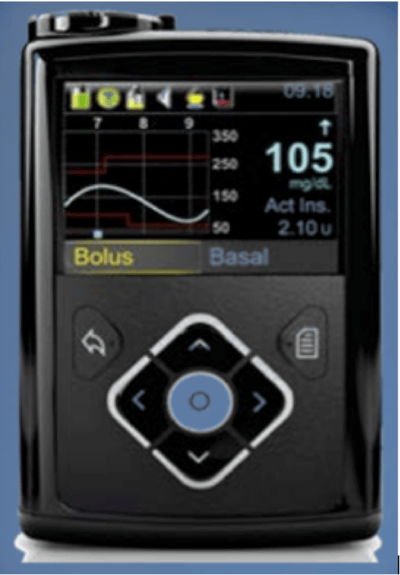 Medtronic provided updates on several upcoming CGM and insulin delivery products at an early June analyst meeting. Though these meetings are really meant for investors, there is typically lots of valuable learning between and in the lines! Nearest term is the MiniMed 640G system, which we learned is actually already approved in the EU (!); this device uses a CGM reading to actually predict hypoglycemia before it occurs and thus suspend insulin delivery to avoid it. It then resumes insulin delivery once sensor glucose levels recover. The device is the next step forward from the MiniMed 530G/Enlite CGM (read our test drive here), which suspends insulin delivery once glucose levels reach a threshold for hypoglycemia. The MiniMed 640G system is expected to launch in Europe by April 2015, and a US trial of the device is starting very soon. You can see a sneak peak of the MiniMed 640G in the photo above, which is waterproof, will have a color screen, and feature a completely redesigned, simpler user interface. The system is expected to launch in Europe with a second-generation Enlite CGM sensor, while the US version will test a third-generation version with improved accuracy and comfort.

The Analyst Day also announced that the MiniMed 670G, a “hybrid closed-loop system,” is in development – no details were offered, but this system will automate even more insulin delivery beyond the MiniMed 640G (e.g., automatically controlling background basal insulin delivery 24 hours a day, with patients bolusing for meals on their own). A MiniMed Flex “hybrid” pump is in the works as well; this pump will have a smaller footprint and give patients the flexibility to wear their pump “on” or “off” the body (e.g., attached to the abdomen or in a pocket).

Last, Medtronic announced the initial European launch of the MiniMed Duo, a three-day wear combined insulin infusion and CGM sensor set. This combo device locates both the CGM sensor and the insulin catheter under a single adhesive patch, known as a “snake bite.” The MiniMed Duo will launch first in the United Kingdom and in other European countries over the next few months. On accuracy, the three-day-wear device has a MARD of 15.5% vs. paired blood glucose meter readers, while the Enlite’s labeled accuracy is 13.6% compared to YSI readings. The Duo may be a good option for very young patients who have less space on their body for separate CGM and insulin delivery sites. There is not yet a timeline to bring the MiniMed Duo to the US and we’re not sure about how reimbursement would work ~ overall, we don’t anticipate a huge uptake for this product, but we’re impressed it is out.

A postscript – at the ADA itself, though not at this meeting, what looks to be a compelling partnership between Medtronic Diabetes and Sanofi was announced. It should be a win/win – Medtronic will help Sanofi with insulin delivery outside a syringe and pen, as well as professional CGM, while Sanofi will help Medtronic think in a simpler way from a product introduction perspective. We’ll continue to watch the launch…– AJW/AB