Medtronic Submits US Version of the Veo Insulin Pump to FDA (!), Provides Updates on Future Products, and Announces Partnership with JDRF and the Helmsley Charitable Trust 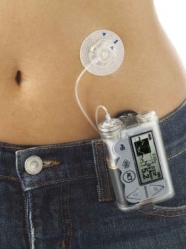 In June 2012, Medtronic held an Investor Conference to describe its upcoming products and expectations for the next five years. One of the biggest news items for patients was that the Medtronic Veo insulin pump, now called the MiniMed 530G in the US, has been submitted to FDA. This pump will have a low-glucose suspend feature and will also include the newer, more accurate Enlite CGM sensor (for reviews of the Enlite, see test drive in diaTribe #32 and thinking like a pancreas in diaTribe #36). We understand that early interaction with the FDA has been positive, and Medtronic hopes for approval in about a year (i.e., around June 2013). Encouragingly, this news represents a significant acceleration over the previous timeline for its FDA submission. It’s about time too, since the Medtronic Veo has been available outside the US since 2009! Additionally, we believe the positive regulatory news may allow Animas to move faster on the development of its Hypoglycemia-Hyperglycemia Minimizer System (see conference pearls in this issue for more information).

Also in the near term is the Medtronic MiniMed 640G, the second step in the path to an artificial pancreas. This new pump takes the low-glucose suspend feature in the Veo and the MiniMed 530G one step further – instead of suspending insulin delivery only when a hypoglycemic threshold is crossed, the upcoming MiniMed 640G will suspend insulin delivery when hypoglycemia is predicted (i.e., a hypoglycemia minimizer, or what Medtronic is calling “predictive low-glucose management”). The company plans to launch the pump early next year (2013) in Europe and in two to three years in the US. We were very encouraged to hear this news and believe the MiniMed 640G could further help patients reduce the frequency and duration of hypoglycemia, especially at night.

Longer-term, Medtronic has several other new diabetes technologies in the works. The company’s long-awaited patch pump is now in the final design and review phase and is expected to launch in the next two to three years (fingers crossed). A next-generation version of the Enlite CGM sensor is also slated to launch in that time frame. Even beyond that, Medtronic is working on an overnight closed-loop system that would essentially automate nocturnal blood glucose control and a CGM sensor that does not require fingersticks – exciting!

Medtronic also announced a partnership with JDRF and the Helmsley Charitable Trust. The three-year endeavor is focused on developing a new type of CGM sensor for use in the artificial pancreas (for more on the current status of the artificial pancreas, see conference pearls in diaTribe #40, learning curve in diaTribe #39, and conference pearls in diaTribe #38). Medtronic will seek to combine two different methods of measuring glucose, creating a so-called “redundant sensor” – in other words, current sensor technology (based on a chemical reaction using glucose oxidase) will be combined with a completely different, future sensor technology (based on fluorescence). The hope is that such a redundant approach will increase the accuracy, reliability, and safety of CGM readings, and thus improve the performance of an artificial pancreas. The partnership is one of the largest collaborations to date by JDRF and the commitments are up to $17 million in funding over three years. We also noticed a particularly high-level of excitement on the informative follow-up call announcing the news. To view the PowerPoint slides and listen to the call’s audio, please visit http://engage.vevent.com/rt/medtronic~060512, enter your email address on the bottom of the page to register, and then login on the left side of the page. –AB