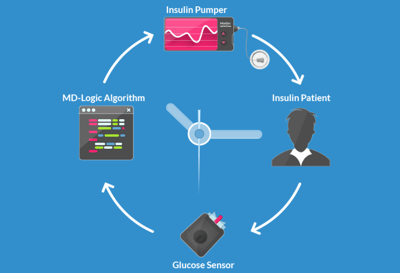 This morning, Medtronic signed an exclusive agreement with DreaMed Diabetes to incorporate the GlucoSitter artificial pancreas software into future Medtronic insulin pumps. As we understand it, a pump with the built-in GlucoSitter software will come after the MiniMed 670G hybrid closed loop system, which is slated to launch in the US by April 2017. Timing aside, this is important news for patients for a few key reasons:

Today’s agreement gives Medtronic responsibility for further development of the software, which will likely entail further clinical trials and perhaps tweaks to the software algorithm. The news is a major step for the artificial pancreas field, as it represents the first academic group to form a new company (DreaMed Diabetes) and publicly announce the licensing of its closed-loop software to an established insulin delivery company (Medtronic). Other academic groups with artificial pancreas algorithms include MGH/BU’s Bionic Pancreas and UVA’s DiAs system.

Medtronic has had a string of very positive updates on automating insulin delivery in recent months. The MiniMed 640G (predictive low glucose management) launched in Europe and Australia earlier this year, and a pivotal study of the device is underway in the US. Meanwhile, the MiniMed 670G hybrid closed loop system is well into development, with launch expected in the US by April 2017 and in Europe by April 2018.

Other companies in the field are certainly thinking about artificial pancreas efforts and/or have already begun developing their own products (including Animas, Asante, Bigfoot Biomedical, Dexcom, Insulet, Roche, and Tandem), though none appear to be as far along as Medtronic in terms of product development and clinical trials. Greater competition ultimately benefits patients, and it’s likely that a range of automated insulin delivery systems will be needed to satisfy all the different styles of managing diabetes. –AB/AJW