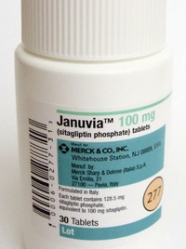 Merck is one of the country's largest pharmaceutical companies, so the FDA's approval of the company's first diabetes drug brings a major player into the field. Late last year, the FDA gave its blessing to a much-anticipated oral drug for type 2 patients called Januvia (diaTribe subscribers received this news via our "news alert" system that day). Granted, the name sounds like an obscure planet in the solar system or perhaps a new-age rock band, but Januvia is the first agent in a novel class of diabetes treatments that we believe can significantly improve care if they are taken early in the progression of the disease. Minimal side effects are a major benefit. The potential impact is obvious: only 33% of type 2 patients who are on medication are considered to be "at goal," so any drug that enhances control could find a large market.

Merck has the marketing and financial muscle to give its new product every chance for success — and it's off to an excellent start. Within eight days of the approval, Merck had contacted 70,000 physicians, stocking many of them with free samples; the company has targeted 100,000 doctors for its initial outreach. Meanwhile, Merck's januvia.com website had 60,000 hits in the first three weeks, and a January report from pharmaceutical tracking firm IMS showed that nearly 20,000 prescriptions were written during the first week of 2007. This is far fewer — on a week-to-week comparison — than the 500,000-plus prescriptions written for Actos and Avandia combined, but it's far more than the well under 1,000 prescriptions for Exubera (inhaled insulin) and quite respectable compared to 50,000 prescriptions written for Byetta.

Moreover, a similar product by Novartis is also under review by the FDA. The drug's name has an intergalactic connotation as well — Galvus. Whatever they're called, these products could be of great importance to diabetes.

A DPP-what? Januvia is part of an emerging class of "incretin-based" therapies, the most popular of which is Byetta, which over 500,000 people are now taking. Incretins are "gut hormones" our bodies use to digest and process our food. Among other things, the incretins help the body's metabolism by increasing insulin production and slowing food absorption — both of which should work to reduce glucose levels. But incretins have a problem: secreted by the endocrine cells of the intestine, they only survive in the blood for one to two minutes before they are obliterated by an enzyme called dipeptidyl-peptidase 4, or DPP-4. This doesn't represent a problem for nondiabetics. They don't need the incretin boost because their beta cells can produce enough insulin to carry the load. Incretins aren't critical for type 1 patients either because their beta cells have already been destroyed — you can't pump water from a dry well. But incretins can stimulate insulin from the weakened beta cells of type 2 patients — and that's where Januvia comes in. Januvia is a so-called DPP-4 inhibitor. It blocks the DPP-4's search-and-destroy function, giving the grateful incretins a longer life — hopefully, to recharge the beta cells. This allows patients to regulate their glucose levels better because the incretins trigger insulin secretion by the beta cells and impede glucose production by the liver.

So, what's wrong with the treatments we already have? Currently, physicians have the following pharmaceutical choices as the first line of attack for type 2 diabetes:

All of these options can involve unpleasant, if not dangerous, side effects, so it's no surprise that primary care doctors might delay needed drug therapy and choose to emphasize diet and exercise instead, although it is dispiriting because as a result, many patients don't get treatment when their A1c levels first stray above 7, to 7.5, 8, or even higher. But many believe (including us) that we will soon enter a new era of diabetes care. Companies have long been encouraging earlier, more aggressive therapies — and leading doctors have advocated the same — but the existing drugs have made that approach difficult (patients typically aren't excited to pay $3-4/day or more to gain weight, for example). Incretin therapy, on the other hand, makes that type of intervention easier.

What makes Januvia different? The major advantage of Januvia (and other DPP-4 inhibitors) is its favorable "tolerability" profile, which means it's easy to take and has few side effects. Januvia is considered a very "clean" drug: no weight gain, no hypoglycemia, no gut troubles, no heart problems, and no swelling. In other words, no reason for patients to stop taking the drug. These are also important considerations for physicians, some of whom are reluctant to prescribe drugs whose side effects will cause patients to call them with complaints. And the dosing for Januvia is easy. It's taken orally once a day. While Januvia doesn't cause weight gain, we should point out that unlike Byetta, it won't cause weight loss either.

The study data indicate that Januvia, taken as monotherapy, reduces A1c scores on average by between 0.6% and 1%; taken in combo therapy with metformin, the reduction increased to 2.1%. These numbers suggest both clear opportunities and limits for Januvia. The drug should be very beneficial for patients with A1c's at 7.5% or lower, who could use the product — probably in combination therapy — to stay at or close to their A1c target. This requires early intervention, but "glycemic success" helps motivate patients and could curb the debilitating progression of the disease. As Dr. Zachary Bloomgarden, Clinical Professor of Medicine at Mount Sinai, told us, "DPP-4 [inhibitors] will be perfectly suitable for first, second, and third [line therapy], and if physicians take the 6.5-7% A1c goal seriously, most type 2 patients will need multiple agents to achieve it."

However, once a patient exceeds, say, 8.0%, more aggressive therapy will be needed. Januvia simply doesn't have enough glucose-lowering benefits to get these patients to target on its own. In fact, it could even impede necessary care by allowing patients to avoid more intrusive therapy; namely, insulin. Dr. Irl Hirsch, professor of medicine at the University of Washington, said, "The problem is in the typical patient with the very high A1c, the hypoglycemia benefit may not be all that important and, like the TZDs, these [DPP-4 inhibitors] may be used as yet another procrastinator for those who need insulin."

There is also uncertainty about long-term safety. Only about 1,100 patients have been treated for more than a year with Januvia, though more studies on DPP-4 inhibitors are underway. We know of 43 studies right now involving about 6,700 patients, 70% of them on Januvia. One point of known caution: because Januvia clears mostly through the kidneys, patients with kidney problems need different dosing and should take periodic tests (ask your doctor if he or she doesn't suggest it) to ensure that Januvia is having no damaging effects.

At just over $4 per pill, Januvia isn't cheap. Merck, along with its competitors in this category, will have some reimbursement hills to climb, probably especially for patients who want to take it as a first-line drug. We are intrigued by Merck's decision to price below $5 a day. This price seems designed to attract support from insurers and HMOs, even though it is still pricier than generics like metformin and the sulfonylureas, which cost pennies per pill. Regardless, Januvia's price is a reminder that new diabetes drugs and technologies almost always cost more than what they're trying to replace.