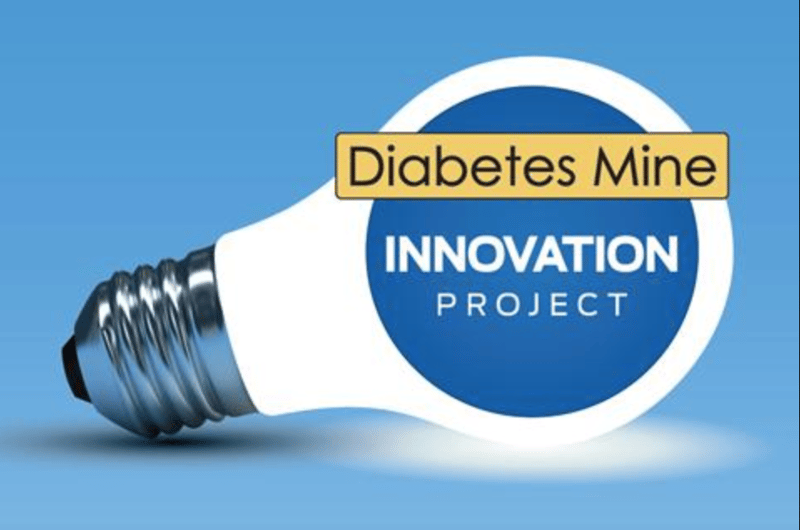 DiabetesMine hosted their annual D-Data Exchange and Innovation Summit at Stanford University, highlighting some of the latest diabetes technology. A panel on smart pens was the star of the meeting with InPen, Gocap, and Bigfoot all sharing updates on their vision. New smartphone apps also drew our attention with cool uses of artificial intelligence to make diabetes management more convenient.

Smart pens incorporate digital technology into insulin pens or caps so that data can be collected passively on insulin doses, timing, and insulin on board. Right now, only pump users can easily track such data digitally – smart pens aim to fill this gap.

The Bluetooth-enabled, reusable InPen tracks insulin doses and automatically sends the data to a paired app. The app, in addition to tracking doses and timing, has a mealtime dose calculator and automatic insulin-on-board tracking. The reusable pen lasts a year, requires a prescription, does not need recharging, and is compatible with Novolog and Humalog prefilled cartridges. Approved by the FDA in 2016, InPen is set to launch this month via mail order pharmacy and in other select pharmacies.

Users will also receive a free AgaMatrix Bluetooth-enabled blood glucose meter (BGM) with their InPen. InPen uses Apple Health, meaning it will pull in glucose data from other devices (e.g., AgaMatrix BGM, Dexcom CGM), and also send insulin data (i.e., that other apps can then read). The app currently includes a mealtime dosing calculator and insulin-on-board tracker, though Companion hopes to build a smarter dose advisor over time that optimizes dosing based on patterns.

Gocap is a reusable Bluetooth-enabled cap for disposable insulin pens that uses a sensor to read the amount of insulin left in the pen cartridge. This allows the smart cap to track dose amount, time, units remaining in the pen, medication type, and temperature. Currently, the battery is designed to last 10 days on one charge. Gocap sends data to the paired app, which is like a logbook for collecting dosing data and showing progress on doses. Common Sensing does not currently calculate mealtime doses or give other dosing advice.

A clinical trial with Gocap and Dexcom CGM has finished, and the device is already being used in a pilot program with Sanofi, Aetna, and One Drop. It is currently compatible with Lantus and Apidra, but four more insulins are expected to be integrated – possibly Humalog, Novolog, Tresiba, and Toujeo.

On the pricing side, Common Sensing plans to sell Gocap on a subscription model at $25 per month per user. The company aims for insurers to cover most (or all) of the cost. Notably, Gocap can store over 2,000 insulin doses on the cap, and since it has a download cable that can also be plugged into the computer, it will work for those without a smartphone.

In 2018, Bigfoot has planned two trials of its insulin delivery systems with the second generation of Abbott’s FreeStyle Libre CGM.

For users on multiple daily injections (MDIs), the “Inject” pivotal trial will test automated insulin titration using a connected smart pen cap (acquired from Timesulin), FreeStyle Libre (providing continuous glucose data), and a smartphone app that will display dosing recommendations for those on basal and mealtime injections. The smart pen cap will fit on top of current disposable insulin pens, meaning it should integrate nicely with what people on injections are already using.

Meanwhile, the “Loop” trial will test Bigfoot’s automated insulin delivery system including a tubed insulin pump, Abbott’s FreeStyle Libre CGM, a dosing algorithm (embedded in the pump), a paired Bigfoot smartphone app to view the system status and inform it of meals, and a custom version of Ypsomed’s Orbit infusion set. Bigfoot has said its “Loop” product could launch around 2020, pending FDA approval; we’d guess the Inject product could be on similar timing. (Click here to learn more about other efforts to develop automated insulin delivery.)

Bigfoot aims to sell both systems as a monthly bundled service, which should be smaller hassle for people and hopefully less expensive for insurance companies. Bigfoot also plans to work with insurers to allow users to switch between the platforms, meaning those wanting a pump vacation could go from “Loop” to “Inject,” and vice versa.

Calorie Mama (part of a suite of popular apps made by Azumio) combines the ease of taking photos of food on a smartphone with powerful artificial intelligence (AI) technology. Traditional calorie counter apps require users to search for food items (via manual text input) in a clunky database and then try to figure out which one of the many options they are actually eating. When a user takes a photo in Calorie Mama, however, the Smart Nutrition Analysis Platform (SNAP) identifies what the food might be (based only on the photo!) and the user must simply confirm it is right to log it. Since the app uses AI, it gets more accurate and smarter the more it is used.

Calorie Mama can’t accurately estimate portion sizes all the time, meaning it’s not the foolproof, automatic-carb-counting app people with diabetes dream of. It is, however, certainly a step in the right direction, and it does recommend a portion size that can be changed by the user before logging.

Notably, the app can identify both straightforward plates and diverse cuisines with mixed plates of food. It can also scan barcodes for packaged foods. 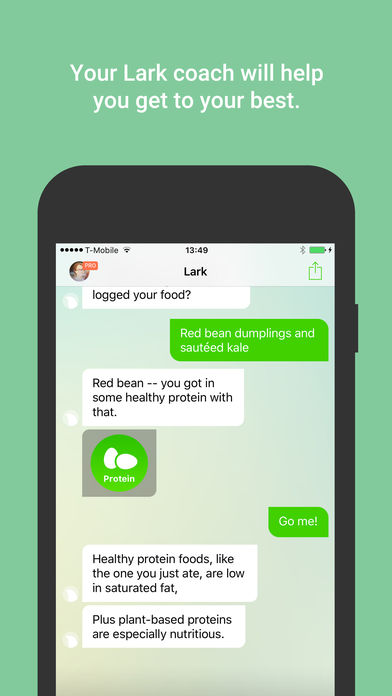 Lark applies AI technology to a massive amount of health and lifestyle data – over 1 million people have used it. The result is personalized advice from an automated nurse that learns from the experiences of everyone in the database but tailors advice to the single user.

The app coaches primarily through a text-message-like interface (see picture). The AI “coach” has some personality, but mixed with lightning quick replies and data crunching abilities:

Underpinning Lark is research from Harvard and Stanford.

Based on clinical trials showing that the AI nurse is as effective as an in-person coach, Lark’s 16-week DPP is recognized by the CDC and fully medically reimbursed by many insurance companies. The app allows you to check if your insurance plan covers Lark Thrive, which also includes a wireless BodyTrace smart scale and Fitbit Flex wristband. Unfortunately, Medicare is still withholding coverage for digital based DPP services, including Lark.

A Lark app specific to people with type 2 diabetes is also currently in beta testing.