Not All A1cs are Created Equal 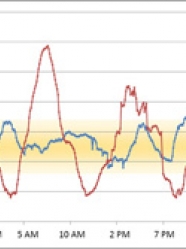 From national educational campaigns to international forums, that has been the message to diabetes patients for some years now. But there may be more to good diabetes management than knowing your A1c. In fact, there may be a lot more.

The A1c test measures average blood glucose over the past two or three months to give an overall idea of glycemic control. A1c is considered the gold-standard of control because several large studies have shown that a lower A1c (i.e. better glycemic control) is associated with fewer complications, such as eye disease (retinopathy), nerve disease (neuropathy), and kidney disease (nephropathy) as well as decreased risk of heart disease or stroke in type 1 patients. The American Diabetes Association (ADA) recommends that patients target an A1c of 7% or lower (7.0 corresponds to an estimated average glucose of ~154 mg/dL or 8.6 mmol/L – see Table 1), but the A1C goal for selected individual patients is as close to normal (<6%) as possible without significant hypoglycemia. Other noted organizations including the American Association of Clinical Endocrinologists and the European Association for the Study of Diabetes (EASD) recommend a more ambitious target of 6.5% A1c (corresponding to an estimated average glucose of approximately ~140 mg/dL or 7.7 mmol/L).

But is there more to glycemic control than A1c? Is there such a thing as quality of A1c?

beyond the percentage a1c

Although A1c is often used alone to assess glycemic control, a growing number of researchers, doctors, and educators are beginning to pay more attention to a second measure of control called glycemic variability. To explain the meaning of glycemic variability, we will examine the blood glucose records from two imaginary people with type 1 diabetes, “Bill” and “Dan.” Bill and Dan both have an A1c of approximately 6.5%; therefore, an A1c test would suggest that both have very similar glucose control. However, if Bill and Dan wear a continuous glucose monitor for a few days, we may find that despite similar average blood glucose values, the range of blood glucose values regularly experienced by the two patients could be very different. 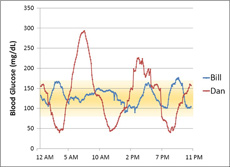 Now let us assume that Dan’s blood glucose levels fluctuated much more. He had three episodes of severe hypoglycemia (below 50 mg/dL or 2.8 mmol/L), and at one point his blood glucose rose to almost 300 mg/dL (16.7 mmol/L). He remained in the “target range” about 50% of the time – not bad, but not ideal.

Assuming that this day is typical (as if there is any such thing!), we would say that Bill has a better A1c quality because he experiences less severe hyperglycemia, less severe hypoglycemia, and less glycemic variability, even though he has the same A1c as Dan.

Glycemic variability is not nearly as well accepted as A1c as a measure of glucose control. Part of the reason why experts are split on the issue of whether glycemic variability matters is that there is very little clinical evidence to either support or disprove its importance.

Experts who believe that glycemic variability is an important part of glycemic control point to troubling lab research that suggests negative effects of high blood sugar on cells even for short periods of time. When cells in a test tube are briefly exposed to glucose levels above a certain threshold, a number of genes that are involved in the formation of plaques in the inner lining of blood vessels - specifically arteries - are “turned on.” Once these genes are “turned on,” they remain on even after sugar levels have returned to normal levels. Some believe that these partial blockages in the arteries caused by periods of high blood sugar may increase the risk of cardiovascular disease and heart attacks. The thing to remember, of course, is that cells in a test tube may not accurately represent what happens in a system as complex as the human body.

There are some very limited human data to support the theory that glycemic variability is important. Dr. Irl Hirsch, a renowned endocrinologist and member of the diaTribe advisory board, presented a study on this topic at the recent ADA meeting. The study showed that increased glycemic variability is associated with death in hospitalized patients who recently received a stem cell transplant.

Another study presented at the ADA meeting by Dr. Eric Kilpatrick, a well-known skeptic about the value of glycemic variability, showed that variability in A1c may predict cardiovascular disease. Some experts have suggested that fluctuations in A1c (a long-term glucose control measure) may indicate shorter-term fluctuations in blood glucose levels. They argue that Dr. Kilpatrick’s study supports the theory that glycemic variability may lead to diabetes complications.

responding to the evidence

Dr. Hirsch emphasized the need for studies designed specifically to answer the question of whether glycemic variability affects one’s risk for getting diabetes complications. He emphasized the need for the study to look at a “clinically meaningful outcome,” such as heart attacks, dialysis or eye surgery. In our opinion, the advent of continuous glucose monitoring is a key step to being able to carry out a trial like this. We would like to see this sort of trial planned – it would likely take 5-10 years to glean an “answer”, and that in itself is a reason to start today. Until such a trial is conducted to show the impact of glycemic variability on these outcomes, it may make sense to try to keep glycemic variability down just in case.

We strongly believe that a long-term outcomes trial should begin to assess the impact of glycemic variability on long-term complications. Let us know if you agree – send a message to [email protected]org to log your opinion.