Not Dead Yet: My Race Against Disease from Diagnosis to Dominance 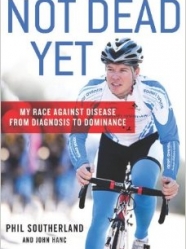 by lisa vance and kelly close

When Phil Southerland was diagnosed with type 1 diabetes at seven months old, doctors told his mother he would probably be blind by the time he was 25.  Not Dead Yet, a memoir of Phil’s life written with Jonathan Hanc, chronicles Phil’s life from this dramatic beginning until the present day: he is 29 and has perfect vision.  He has been gaining prominence the last few years as one of the co-founders of Team Type 1, which began as cyclists dedicated to raising awareness of diabetes care. The team now participates in other sports including a running team and a triathlon team (in addition to having Team Type 2 team) and Phil himself has gained considerable attention – in the media and among corporate sponsors – for his efforts. The book itself combines a cycling memoir with a larger discussion of living with type 1 diabetes. Phil often breaks away from the narrative to talk directly to people with diabetes about the day-to-day management of the condition. Thanks largely to Phil’s riveting life story, he delivers the message that people with diabetes can achieve their highest goals.

After his diagnosis as a baby, Phil’s mother, Joanna, takes heroic measures to manage such a young patient. When Joanna tells six-year-old Phil about the doctor’s early prediction that he will someday go blind, the boy resolves to do everything possible to avoid this outcome. By that time, Phil already knew how to take his own insulin injections (this is not uncommon for young kids), and as an older child he worked diligently with his endocrinologist to keep his blood glucose in good control. Phil initially took up cycling in part because he discovered that if he spent the afternoon riding his bicycle, he could have a Snickers bar without sharply elevating his blood sugar.

While Phil highlights his own successes with diabetes management, he is not overly prescriptive, remarking that literature for people with diabetes tends to emphasize “what you couldn’t and shouldn’t do.”  Phil, of course, stresses what he can do, and he emphasizes how important his community has been in helping to manage his condition. At one point, he recounts how he was able to go out drinking with his friends in college.  At the beginning of each evening, he would remind everyone that he was diabetic and should anything seem wrong during the night they should check his blood sugar. On one occasion when Phil got sick after an evening out, his concerned friends knew how to check his blood sugar and, upon seeing that he was at a safe level, proceeded to help their inebriated friend to bed.

Phil also describes how he went into severe hypoglycemia during a bike tour.  His friend Daniel realized that something was wrong, and seeing that Phil’s blood sugar was dangerously low (16 mg/dl - he checked it on his meter), gave Phil energy gel until he came to. Daniel’s knowledge of diabetes probably saved Phil’s life.  Today this sort of informed community building is part of Team Type 1’s mission, which urges every individual with diabetes to have a “Magnificent 7,” seven individuals from different aspects of his or her life informed about the nature of diabetes and what to do in case of severe hypoglycemia. We like that - we also found the book very instructive as it related to diabetes technology, especially Phil's appreciation of continuous glucose monitoring (CGM) and his discussion of how terrific it was to be able to see his blood glucose so easily (his CGM was mounted on his handlebars!).

We at diaTribe have been big fans of Phil and Team Type 1 for a long time, and we believe his book will help increase awareness of the disease while spreading the message of hope, inspiration, and effective treatment of diabetes through diet and excercise, as well as the use of technology and insulin.

To purchase a copy of Not Dead Yet, please click here. To learn more about Team Type 1, please visit http://teamtype1.org/​.