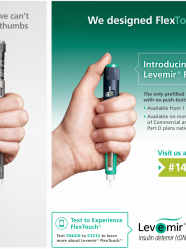 On June 19, Novo Nordisk announced the launch of its FlexTouch pen for the long-acting basal insulin Levemir (insulin detemir). FlexTouch, which has been approved in Europe since July 2011 and launched in various other regions worldwide, is Novo Nordisk’s improved FlexPen. Most notably, FlexTouch is the only prefilled insulin pen with a push-button that does not extend outwards to deliver a dose, which means less force and dexterity are required compared to earlier pens. (Indeed, the clever advertisements display a thumb struggling to reach a hyper-extended button on standard insulin pen, with the tagline, “Because we can’t redesign thumbs, we designed FlexTouch.”)

FlexTouch holds up to 300 units of insulin and doses in one-unit increments, with a maximum dose of 80 units (increased from the previous 60 unit maximum). We tested FlexTouch ourselves at last month’s ADA and liked how the device’s “click” makes it extremely clear when dosing has finished. According to the company, FlexTouch is covered by 96% of commercial and Medicare Part D plans nationwide. This is another positive sign of the increasing focus on improving drug delivery. –AJW