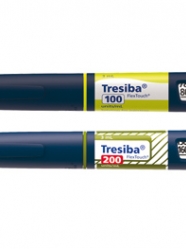 In March 2013, Novo Nordisk launched Tresiba (insulin degludec), its new once-daily basal insulin for type 1 and type 2 diabetes, in the UK and Denmark. Tresiba will be priced roughly 70% higher than the other leading basal insulins, Lantus (insulin glargine) and Levemir (insulin detemir), in the UK and about 49% higher than Lantus in Denmark. However, because the UK’s National Health Service has been able to negotiate the price of Lantus and Levemir down, Tresiba will still be only $3.63 per day there ($109 per month; for someone taking 50 units/day).

In phase 3 trials, Tresiba demonstrated a similar A1c reduction versus Lantus (insulin glargine), but with a 26% lower risk of nocturnal hypoglycemia. The insulin will come in two devices – a pre-filled FlexTouch pen or the refillable Penfill – and in two concentrations (U-100 and U-200), allowing users to take a maximum of 80 or 160 units in a single injection. The latter dose is the highest possible in an injection on the market, and is useful for people with significant insulin resistance and high insulin needs who currently must split their basal insulin injections. Another advantage of Tresiba is an option for more flexible daily dosing than is possible with current basal insulins. While Novo Nordisk is officially recommending that Tresiba be taken at the same time each day to get the best results from the drug, patients have the possibility of delaying or taking the injection earlier as needed (as long as there is a minimum of eight hours and a maximum of 40 hours between the injections). For instance, if your last Tresiba dose was on Monday at 9 am, your Tuesday dose could be taken at 5 pm, and your Wednesday dose could be taken at 9 am again.

The FDA recently sent Novo Nordisk a Complete Response Letter (CRL) for Tresiba and Ryzodeg (Ryzodeg is a mixture of 70% Tresiba and 30% Novolog), asking for a pre-approval cardiovascular outcomes trial (CVOT) to show if the insulin has an unacceptable safety risk for heart disease. See our Editor-in-Chief Kelly Close’s letter to learn how the FDA’s response may affect future drug development. It will take some time to design the CVOT and find enough participants to enroll in the trial, but we will report back with further developments in Tresiba’s path toward approval.–MN/JD