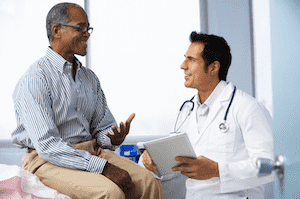 Learn more about how you can participate in this clinical trial from Novo Nordisk, testing whether a new once-weekly insulin injection, when combined with semaglutide, can help people with type 2 diabetes better manage their glucose levels and lose weight.

Trial Name: A 52-Week Study Comparing the Efficacy and Safety of Once Weekly IcoSema and Daily Insulin Glargine 100 Units/mL Combined With Insulin Aspart, Both Treatment Arms With or Without Oral Anti Diabetic Drugs, in Participants With Type 2 Diabetes Inadequately Controlled With Daily Basal Insulin (COMBINE 3)

What is the trial testing?

This study will enroll around 680 participants with type 2 diabetes to study their glucose levels while taking a combination of semaglutide (a GLP-1 receptor agonist) and Icodec (a new ultra-long acting insulin currently being investigated in clinical trials).

This combination is referred to as “IcoSema.” Participants will be randomly assigned to one of two groups: those receiving a once-weekly dose of IcoSema, and those receiving a daily basal insulin injection (combined with mealtime insulin two to four times per day). Treatment will be given by injection, regardless of group assignment.

Researchers are measuring participants’ average change in A1C over the entire course of the trial (around 56 weeks). They are also measuring changes in body weight, number of severe episodes of hypoglycemia, changes in fasting glucose levels, and Time in Range, as measured by a continuous glucose monitor (CGM) in the first eight weeks and final four weeks of the study.

Why is this trial new and important?

The GLP-1 receptor agonist semaglutide (known by the brand names: Wegovy, Ozempic, and Rybelsus), has been shown to have several benefits for people with type 2 diabetes. It helps people lower their glucose levels, better manage their weight, and it has been shown to protect against diabetes-related complications such as heart disease.

Ongoing research studies will investigate whether combining a once-weekly GLP-1 receptor agonists with once-weekly insulin as combination therapy may help people lower their overall insulin dose while maintaining the same or better glucose levels. Combinations of basal insulin and GLP-1 drugs have been successful in past clinical trials, however, they must be injected daily.

There is a lot of excitement around the possibility of a once-weekly insulin injection, which could make it easier for people to stick to their treatment plan. In one study of people with type 2 diabetes, all of whom had an A1C above 9% and discontinued or never started using insulin, nearly 75% of participants reported issues with frequent injections as a main reason to not use insulin. A once-weekly dose could replace the need for multiple daily injections and may help people with diabetes take their medications more consistently.

Trial locations: This is a multicenter, worldwide study with 85 locations across the United States, France, Germany, Japan, India, South Africa, and several other countries. You can see a list of all participating locations here.

You may be eligible to participate in this study if you:

You can see a full list of inclusion/exclusion criteria here.