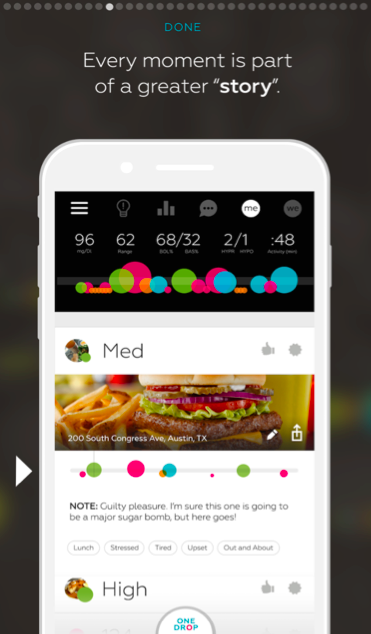 The new diabetes data-logging app One Drop is now available for free on iPhones and the Apple Watch (Android version coming soon). The logging app allows patients to input blood glucose, medications, meal, and exercise data, which integrate with Apple’s HealthKit platform. One Drop originally launched at San Francisco’s LAUNCH Festival 2015 in March, where it won “Best Design” Award (watch the six-minute pitch video). One Drop for iOS can downloaded here. While manual logging apps are old news, One Drop is approaching diabetes data from a new and innovative perspective – see details below on some of the unique insights, data displays, and community features we liked. 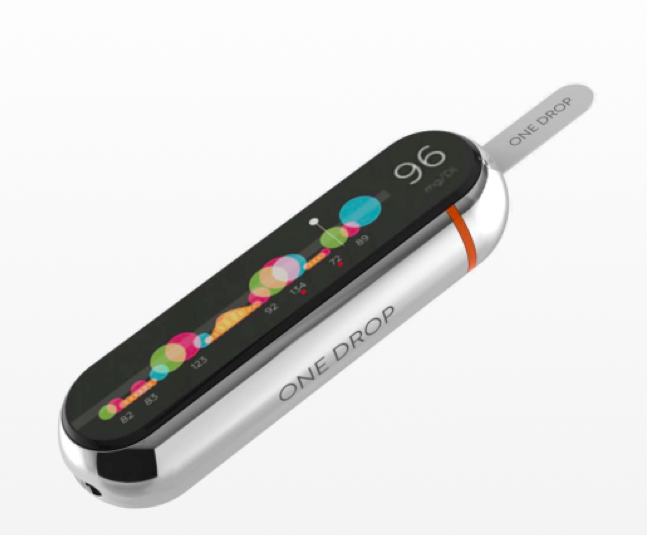 Particularly notable is the company’s future goal to develop a Bluetooth-connected meter to pair with the app – it’s not yet FDA approved, but the hope is for a launch in early 2016. Once on the market, users will pay a monthly subscription price to obtain strips, which will be sent via mail. The very ambitious goal is to make the program completely free if users have insurance, or less than the cost of a monthly co-pay for those paying cash. One Drop hopes to offer unlimited test strips.

Jeff Dachis (diagnosed with type 1 just 18 months ago) is behind the development and launch of One Drop; he brings impressive technology and digital marketing expertise to diabetes, which is readily apparent from the app’s sleek design, big focus on creating a positive and engaging user experience, and commitment to motivating and empowering its users. We’re always excited to see new players in diabetes technology, particularly those bringing a mix of personal connection and deep experience in another field. Below, we share some of the pros and cons of using the new logging app. Jeff told us that the team expects to release new versions every couple of weeks, so we have no doubt this is a work in progress and it will improve markedly with time. If you’ve used One Drop, let us know what you think!

One Drop App – The Pros:

One Drop App – Opportunities for Improvement: