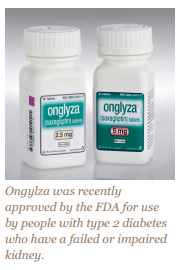 People with diabetes are at significantly increased risk for kidney impairment or kidney failure. Kidney disease can complicate the treatment of type 2 diabetes because some medications should not be used for people with kidney problems.  For example, metformin, the most commonly used first-line therapy for type 2 patients, should be avoided by those who have kidney disease because it can occasionally accumulate in the body, causing a condition known as lactic acidosis. For a diabetes medication to be used in people with kidney impairment, a drug manufacturer must first show that it is safe in this population, and then seek approval from the FDA for this indication. Onglyza, the second drug belonging to a new class of medication called DPP-4 inhibitors (the first was Januvia), recently obtained approval from the FDA for use in those who have a failed or impaired kidney. Supporting this expanded label, the drug manufacturer had conducted a 12-week study of Onglyza (2.5 mg dose) showing that it could safely lower blood glucose (0.9% A1c reduction on average from a baseline of 8.1%) in people with kidney impairment or failure. The rate of serious side effects and discontinuations was similar between Onglyza and a placebo (inactive pill) in this trial. Also, a recent clinical trial documented the potential benefits of initiating Onglyza compared to a sulfonylurea called glipizide in people who are already treated with metformin. In this study, people treated with Onglyza had significantly less weight gain and a remarkable 12-fold lower rate of hypoglycemia than people treated with glipizide. Reduced hypoglycemia and less weight gain are well-established benefits of DPP-4 inhibitors, including Onglyza.  --MY