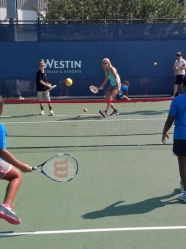 During the US Open tennis tournament earlier this month, Larry Soler of the Partnership for a Healthier America (PHA) announced a pair of new initiatives to promote fitness and combat obesity in children (see the diaTribe dialogue with Mr. Soler in diaTribe #35). Children should be getting at least 60 minutes of physical activity every day, but past estimates suggest just 42% of elementary school students and only 29% of high school students are at this benchmark – and those figures are likely overly generous estimates in our view.

To help children be more active, Mr. Soler announced a major commitment from the United States Tennis Association (USTA): building 3,200 kid-sized tennis courts in 2012 in addition to the 3,000 it previously built in 2011, all of which improves both the availability and child-friendliness of the sport. These courts are a little over half the size of a regular court, and the USTA advises children to use specially designed kid-sized rackets and balls, which are significantly slower than those used by adults. Encouragingly, the USTA has already exceeded the 3,200-court goal and is on track to build an impressive 8,600 child-friendly courts by the end of the year. The Association is complementing that major achievement by providing child-specific training to 12,000 new and current tennis coaches, teachers, and volunteers, as well as $150,000 worth of new tennis equipment to programs for children ten and younger. Considering 30 million Americans played tennis in the past year, we hope this partnership can make a dent in the childhood obesity epidemic. We also very much hope to soon see an agreement with Partnership for a Healthier America and a life sciences company – we urge them to rally! –AW/AB