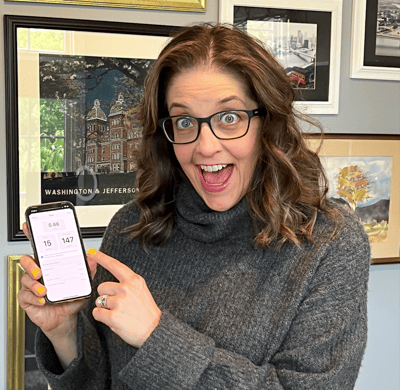 diaTribe’s Julie Heverly had the opportunity to try the new Tandem mobile app, which allows users to administer insulin boluses directly from their smartphones. Here’s her take on the process and app.

I have been waiting almost 20 years for this! It’s finally here and it’s living up to my expectations!

In 2002, four years after my diagnosis, I got my first insulin pump, a Medtronic Minimed.

As someone who had a fear of needles (I passed out at the mall when I got my ears pierced at 16 years old), I was relieved not to have to manage my diabetes with six-plus daily injections anymore. The new technology meant only one needle every three days, and ever since, I vowed I’d never return to multiple daily injections.

My insulin pump was welcomed and wonderful, but it did create a question I had not expected: where to wear the pump. At the time, most corporate attire for women consisted of dresses and skirts that did not have pockets. So, I had to get creative.

I remember trying various items that were available at the time – a thigh garter with a pocket, a calf sleeve, and a cami with a sewn in pocket. None of these worked; on the walk from my car to my office, the pump fell out of those contraptions more times than I could count. There was only one place that was safe for this life saving device: my bra. So for the better part of the last two decades, that’s where I’ve kept it.

However, when you are 25 years old, trying to build a career in public affairs, and have the opportunity to have lunch with Larry Rockefeller IV or Barbara Bush, there is nothing more mortifying than reaching into your bra and pulling anything out. So I didn’t. I would wait until after lunch meetings and go to the restroom to take my insulin. I did not know the importance of bolusing before meals at the time, and my glucose levels were negatively impacted by these delays in dosing.

Even after I left corporate America and joined the diabetes world, I was never comfortable with the shock to others when pulling my insulin pump out of my bra. Most days, I bolused in private, pre- or post-public meals. At conferences or all-day meetings, I would have to wear certain outfits that did have pockets or conventional access to my pump. Thankfully, fashion evolves, and including pockets in women’s attire benefited those of us who have to carry medical devices. But it’s still not an easy or perfect situation, but the ability to bolus from a phone is a huge step forward!

In February 2022, the FDA cleared Tandem’s updated t:connect app to allow users to deliver or cancel boluses directly from their phones. On June 15, scrolling through social media while treating a low in the middle of the night, I saw that Tandem was starting a limited launch of the new phone app with the mobile bolus feature, and I immediately signed up.

The ability to bolus from the same device I shop, bank, and monitor my glucose from has been on my wish list for the last 20 years. The next morning, I received an email stating that I had been accepted into the early launch and that I would be getting more information in “the coming weeks.” A week later, I started checking my emails and junk mail folder every day.

After several weeks of anticipation, reading everything I could find about the launch from people who were sharing, I finally got an email notification on July 13 from Tandem. The software update for my t:slim X2 pump was available! I took my lunch break and started the required training.

Things to know about mobile bolusing and the t:connect app

There are two self-paced training sessions. The first takes less than 10 minutes and focuses on a few updates to the pump. The second training is 30-45 minutes long and goes through the mobile app to bolus insulin. The training walks you through the updated screens on the phone and pump, BEFORE you get them on your devices. You can’t get the update until you finish the training (I saw a lot of chatter about this on social media). However, you can access the training and guide afterwards if you still have questions. Both training sessions have quizzes at the end, and you have to answer every question correctly to get your update link. Luckily, if you miss a question, you are able to retake that portion of the quiz until you input the correct response.

Tandem suggested downloading your pump’s data to t:connect BEFORE installing the new software. For pumpers who do not frequently upload this data, this can be a lengthy process due to the sheer amount of information that is being transferred. If you do upload regularly, it should only take a couple of minutes.

The update, just like the update to Tandem’s automated insulin delivery system, Control IQ, requires removing the cartridge and restarting the pump and CGM. I was grateful to have had a full cartridge when my update came through. I did have to give the pump the illusion of re-priming my tubing and cannula. As a reminder, 10 units of insulin through the tubing is the minimum for a restart. The training reminds you, and so will I, to make sure you are disconnected so you don’t get all that extra insulin in your system. I also found it handy to have my current CGM 4-digit code available to me, as after the update, I needed to activate the myCGM function on my pump to resume ControlIQ mode.

I already had the t:connect app on my phone, which is available for both iOS and Android. The bolus feature was not previously in the app, but as soon as I completed the training and updated the app, it appeared on my screen!

Similar to the pump, there are numerous features to ensure no one accidentally boluses from the mobile app. The user must click through three confirmation points  (next, confirm, deliver bolus) to validate the intention to deliver insulin. The bolusing action is also protected by Face ID or a password. There is a 10-second delay before the dose is administered, giving time to cancel the bolus if needed.

I’ve been using it for the past several weeks. It’s easy and convenient. As shown below, the mobile app displays current CGM reading and a 3-hour graph, insulin on board and Time In Range metrics for the past 24 hours. When bolusing, you have the option to include the correction dose, input your carbs, and/or override units manually if you need to.

The only features that I use often on my pump screen that the mobile app does not have are the carb calculator, the extended bolus feature, and the alarm silencer. The carb calculator is a tool of convenience. As an adult, it has been a simple adjustment to make; I do wonder if it’s a bigger issue for young adults still learning carb counting and finetuning their math skills. As a ControlIQ user, there isn’t a tremendous need for extended bolusing. I only use that feature 3-4 times a month and can easily grab my pump at those times. The biggest issue for me, and many others I’ve seen in community forums, is the inability to silence alarms from the mobile app. Since the update, I’ve found myself in church and the audience of a live theatre performance STILL having to remove my pump from my bra to silence alarms. There also seems to be a new sensitivity in the pump and corresponding alarms for incomplete boluses.

Since the update, I have used the mobile app for dosing most meals. The app is convenient and easy. I predominately only reach for my pump now to silence alarms or when it’s time to change my site or CGM. This has also reduced the amount of times my pump has fallen to the floor or collided with my foot. My tubing hasn’t been exposed and caught on doorknobs.

Being able to remotely manage my diabetes is even better than I could have imagined. I just purchased my first turtleneck sweater dress, something that I have not been able to wear for the past 20 years because I wouldn’t have access to my pump for bolusing.

Unfortunately, alarms do still need to be silenced from the pump screen. This is an inconvenience, but I use it as motivation to bolus early and stay in range, so I don’t have to clear any alarms.

A few days after the download, I had the chance to provide feedback, and I shared all of this in the Tandem survey. I hope everyone else shares honest and constructive feedback too. Perhaps future updates to the app will include some of the items mentioned above. One can always hope.

I’m grateful to Tandem for this update and was thrilled to be part of the limited launch. It’s great news that the mobile app is now available for everyone! While the change may seem small to some, it is big to others. The ability to bolus from one’s phone makes disease management more accessible and further integrates it into the real world that people with diabetes exist in. I can’t wait for more people to get the update and for future upgrades that reduce the burdens of managing diabetes