Race Is No Longer a Factor Used to Evaluate Kidney Function 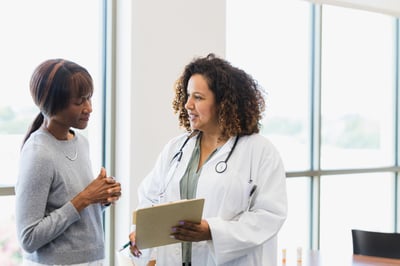 The National Kidney Foundation and the American Society of Nephrology created a new formula to measure kidney function. The “raceless eGFR” will begin to address disparities among people with kidney disease, of which diabetes is the leading cause.

The National Kidney Foundation (NKF) and the American Society of Nephrology (ASN) joint Task Force recommended that race not be considered in the estimated glomerular filtration rate (eGFR), a measure of kidney function. This recommendation reverses a long-standing practice of using race. The Task Force outlined its recommendation in late September in a 55-page formal report.

Several of the nation’s top laboratory organizations endorsed the race-free equation in February 2022. They are working to ensure a smooth adoption of the revision across laboratories in the US.

eGFR is an estimated number that includes an individual’s creatinine level from a blood test as well as age, sex, and body type. The higher the eGFR, the better the kidney function. Until recently, a separate equation was used to estimate the eGFR for people who are African-American.

One in three adults with diabetes have some form of kidney damage. Using the eGFR to evaluate kidney function is important for everyone since it is used to decide eligibility in clinical research, qualifications for a kidney transplant, and chronic kidney disease (CKD) screenings or detection. It is also used for medication dosages and other medical decisions.

This estimation of kidney function is also used to track the population prevalence and risk for kidney disease. Approximately 16% of Black adults have CKD, compared with 13% of non-Hispanic white adults.

The NKF-ASN Task Force recommended “immediate implementation” of the raceless eGFR in all laboratories across the U.S. that includes increased use of a different blood marker, cystatin C, combined with blood creatinine, to generate the new measure. This decision was hailed by advocates and clinicians who have criticized the use of race in the equation. It will also better inform treatment decisions for Black individuals with diabetes and CKD.

The NKF-ASN Task Force was formed in August 2020 to reassess the use of race in the eGFR. The Task Force included health professionals and advocates including clinicians, scientists, and patient advisors. According to the NKF-ASN Task Force report, this project was motivated by the following factors:

The racial factor in the eGFR equation is controversial for several reasons. First, it implies a racial association with higher or lower eGFR scores. Second, the equation is not inclusive of mixed-race people because it requires people to choose just one race, rather than accounting for all of a person’s racial identities.

The race-included equation results in higher eGFR values, or supposedly better kidney function, for Black individuals, which can be misleading. For example, an eGFR score of less than 15 translates to stage 5 CKD, or kidney failure. This stage would qualify someone for a kidney transplant or dialysis initiation. However, with the eGFR formula that included race, all other variables between two people could be equal but a Black person’s eGFR would still be higher than that of a non-Black person. Therefore, the Black individual may not qualify for a kidney transplant or dialysis, while a non-Black person would.

The older equation using race as a variable means Black people have longer wait times for receiving a kidney transplant and they are less likely to receive one. This is especially problematic considering Black individuals are four times more likely than white Americans to have kidney failure.

Race was originally applied to the estimation after studies had suggested that Black patients had higher average levels of creatinine in their blood. The racial variable was meant to adjust for this difference. While the intent was to provide Black people with CKD with a more accurate eGFR, the consequences have often been the exact opposite.

Additionally, there is no consistent or reliable way of reporting race in the eGFR. According to Dr. James Gavin III, clinical professor of medicine at Emory University School of Medicine, “Even [race] self-identification is not consistent. It often reduces to how closely a person’s physical characteristics align with historical perceptions of what members of a ‘race’ look like. This can be most misleading, especially if clinical diagnoses are shaped by such notions.”

The new estimation will help people of color with diabetes make more informed decisions about their kidney health. It could also detect CKD sooner and allow people with CKD to get the appropriate treatment and therapy before it progresses to a more severe stage.

“In the pursuit of health equity, the report will strive to support elimination of potential inequitable outcomes as a result of eGFR reporting, though it should also be re-emphasized that disparities in care extend beyond the imperfections of eGFR measurement and must continue to be addressed,” said Dr. Mukta Baweja, a nephrologist and member of the NKF-ASN Task Force. Raceless eGFR is a step in the right direction, but structural changes are necessary to address the source of CKD health inequities.

Transitioning to a new measure will take time, as all healthcare professionals and labs in the US adjust to the change, but the NKF and ASN have promised to dedicate resources to speed up the process. Previous changes to eGFR reporting have taken several years to implement, but the NKF-ASN strongly urges that the new recommended equations “should be adopted promptly” and for the timeline to be shortened. Based on these revised recommendations, if you are African American and notice race is still included on your lab results, speak with your provider about using the appropriate metrics.

You can learn how to understand and talk to your doctor about your kidney tests here. People can also check their kidney function with the new eGFR formula using the calculator on the NKF website.