Resetting Your Gut Could Lower Your Glucose Levels 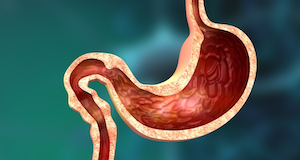 Fractyl Health has developed a new technology called duodenal mucosal resurfacing, which can "reset" your gut, leading to improvements in glucose levels and weight and a reduction in medications. Learn more about this technology and its performance in current clinical trials.

As a part of the digestive system, the gut is one of the largest and most important collections of organs in our bodies and it impacts many different aspects of our health. Years of eating foods high in fat and sugar can lead to buildup and a thickening in the lining of a portion of the gut called the duodenum which comes right after the stomach. This can have negative effects on metabolism, which can lead to insulin resistance and type 2 diabetes.

Researchers started to wonder: What if you could reset this part of your gut back to its original healthy function? If you could erase the effects of all this built-up damage, could you reverse some of the harmful effects that result from the damage?

Fractyl Health has pioneered a procedure that seems to do just that, called Revita DMR (DMR stands for duodenal mucosal resurfacing). A diaTribe team member spoke with Dr. Juan Carlos Lopez-Talavera, Fractyl’s chief medical officer, and Kelly White, PharmD, Fractyl’s vice president of clinical and medical affairs, to learn more about the science behind this procedure, what it entails, and what early clinical trial results show.

The science behind Revita DMR

The DMR procedure is designed to target the duodenum, a portion of the small intestine in your gut. As the body digests food, it travels to the duodenum immediately after passing through the stomach.

“The gut itself is a key regulator of metabolism,” White explained. Metabolism is how your body breaks down food and uses it for energy.

The duodenum is particularly important because it sends signals to the organs that have effects on blood sugar and body weight. According to Lopez-Talavera, research has shown that over time, unhealthy diets high in fats and sugar can lead to this section of your gut having a thickened lining which negatively affects your metabolism. This causes the duodenum to become highly active and over-sensitive, which can eventually lead to insulin resistance, weight gain, and type 2 diabetes.

The DMR procedure tries to reverse this process by removing the built-up lining in the duodenum. “I look at it almost like a metabolic reset,” said White, explaining that the duodenum lining returns to behaving how it did prior to the damage caused by a diet high in fat and sugar.

The early research shows that by reversing this damage, DMR can also reverse the negative effects of the damage – helping people with diabetes who receive this procedure lower their A1C, better manage their weight, and potentially even reduce their medications.

What does the Revita DMR procedure involve?

White and Lopez-Talavera explained that the procedure is relatively straightforward. It is minimally invasive, done in an outpatient setting (which means you do not have to stay overnight in a hospital), and takes roughly one hour under anesthesia.

The procedure is done endoscopically; a small tube is inserted down your throat to your duodenum where it delivers fluid that expands the duodenal tissue and lifts the mucosal layer (the layer that is damaged and needs to be removed). Once the duodenum is expanded and the mucosal layer is lifted, targeted heated liquid removes the excess layers of the duodenal lining.

Lopez-Talavera compared this step to a healing sunburn – the old skin peels off and new skin emerges. In this case, the duodenum regenerates a new healthy lining within a few days, so the procedure won’t keep you from your normal routine. “Patients can resume their daily activities the next day,” said White. “There’s no long recovery period.”

Side effects of the procedure include but are not limited to stomach pain, sore throat, diarrhea, and nausea. However, “The majority of the symptoms we have seen have been very mild,” said Lopez-Talavera.

Most recently, Fractyl published data from their two-year follow up of 27 people with type 2 diabetes who were on at least one glucose-lowering medication.

In this study, the treatment was found to be well tolerated long-term, with only two mild adverse events (constipation and a vitamin B12 deficiency) reported between 6 and 24 months that could have been associated with the procedure. Besides that, no hypoglycemia events or procedure-related adverse events were reported during this period.

The long-term follow-up also showed positive results. The participants had an 8.5% average A1C at the start of the trial. This was significantly reduced by an average of 0.9 percentage points at six months and 0.8 percentage points at both 12 and 24 months. More than half of the participants maintained or reduced the number of glucose-lowering medications they were taking between 6 and 24 months.

In addition, in a small study of 16 adults with type 2 diabetes on basal insulin, the procedure, coupled with lifestyle counseling and a GLP-1 receptor agonist, enabled over half of the participants to be taken off insulin and achieve an A1C less than or equal to 7.5% with no serious adverse events.

The procedure has positive results beyond glucose management as well. “There are so many people with diabetes who also have fatty liver disease, and many of them don’t know that,” said White. But in looking at results from the Revita-2 trial, where at the start, the majority of participants had fatty liver disease, researchers saw that “three months after the study, there was an approximately 35% fat reduction in the liver in these patients, and that’s incredible.”

It’s important to note that these early clinical trials included a very small number of participants. But, of the over 300 procedures that have been carried out mostly in Europe, DMR has demonstrated promising safety and efficacy. The currently on-going pivotal study is aimed at confirming these results.

“The data we have thus far shows that the patients that only receive an endoscopy [the sham treatment] without doing anything else, describe in a blind manner very similar symptoms and complications to those who get both an endoscopy and the procedure done,” said Lopez-Talavera. This means that when a trial participant is unaware whether they received the DMR procedure or the sham procedure (a normal endoscopy), they describe nearly identical symptoms. “So the procedure indeed adds minimal, if at all any, difference in the way the patient feels afterward…with a full disclosure that the overall risk profile of the sham procedure versus DMR procedure are still under investigation in the United States.”

How can I get involved with the clinical trial?

Currently, the procedure is only being studied in people with type 2 diabetes diabetes who are on insulin (Revitalize-1 Study). Fractyl just announced that it received an Investigational Device Exemption from the FDA which allows it to begin its Revitalize-2 clinical trial. In the Revitalize-2 trial, researchers hope to study the DMR procedure in 510 people with type 2 diabetes who are on at least two glucose lowering medications, but not yet on insulin. Learn more about the trial here.

Fractyl is still recruiting candidates for its Revitalize-1 trial. You can learn more about what the trial is testing, as well as eligibility criteria in our article, “Can a New Procedure Help People with Type 2 Diabetes on Insulin?”

To get more information, visit https://revitastudy.com/ or contact Sarah Hackett at [email protected], or call 1-855-608-8751. You can also find contacts for each of the specific research locations here.

Editor’s note: Revitalize-1 is investigating the overall safety and efficacy of DMR in insulin-treated type 2 diabetes. Revita is for investigational use only in the US.