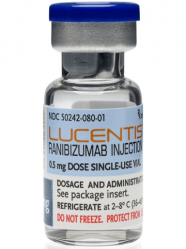 Roche recently announced that its FDA application to use Lucentis as a treatment for diabetic retinopathy was accepted and granted expedited “priority review.” If approved, Lucentis will be the first eye medicine approved for people with diabetic retinopathy. Diabetic retinopathy is a complication from high blood sugars – the condition is caused by changes in the blood vessels in the retina (the back part of the eye that responds to light and is necessary for good vision). Lucentis works by inhibiting a protein that can cause the abnormal changes of these blood vessels in the retina. The drug is already approved for the treatment of diabetic macular edema, and the striking phase 3 RISE/RIDE clinical trial results suggested that people with diabetic retinopathy on Lucentis experienced significant improvements in vision after two years compared to the vision of people not receiving treatment.

It’s worth emphasizing that Lucentis will receive “priority review” from the FDA – that’s a big deal! This designation is often granted when a drug or therapy will be the first treatment available for a given disease, as is the case here in the US. An FDA approval decision is expected by February 6, 2015. A diabetic retinopathy approval for Lucentis would be a positive step for patients, as the complication is the most common eye disease in people with diabetes and the biggest cause of new cases of blindness in working-age Americans. -AJW