The Role of Exercise in Improving Gestational Diabetes Outcomes 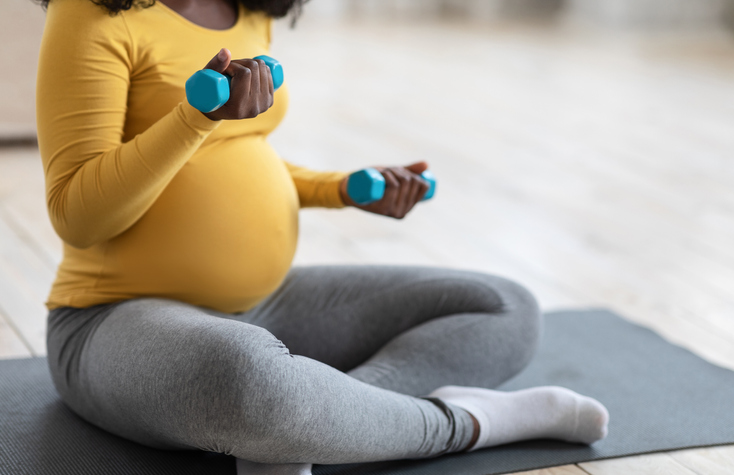 Gestational diabetes affects as many as 1 in 10 pregnancies in the US and can have negative consequences for both the parent and the baby. Proper exercise may help you prevent or manage your gestational diabetes.

According to the Centers for Disease Control and Prevention (CDC), gestational diabetes affects between 2% and 10% of pregnancies. It’s a common diagnosis, but just because it’s common does not mean that it’s not scary. If you were recently diagnosed with gestational diabetes, you may have questions about why you developed it, how you can manage it, and how it will affect you and your baby.

During pregnancy, the placenta releases hormones to support the pregnancy. In some people, these hormones make the body’s cells temporarily resistant to insulin, leading to gestational diabetes. In this way, pregnancy causes gestational diabetes, meaning that those who develop it did not have any type of diabetes before becoming pregnant.

Normally, insulin helps most cells of the body open to let glucose in. When the cells become resistant to insulin such as during pregnancy and the pancreas cannot supply enough insulin, too much sugar stays in the bloodstream, resulting in high blood glucose levels. But who is most at risk for developing gestational diabetes?

Some of these factors, such as your age and family history, are out of your control. But you can always work on your diet and exercise habits. By taking steps to maintain a healthy weight, exercise, and get the right nutrition, you can reduce your risk of gestational diabetes. In doing so, you reduce your own risk of future illness as well as the risk for your future children.

It can be easier to talk about maintaining a healthy weight and eating right than to do it. If eating healthy foods and exercising are not habits for you, you might not know where to start. You will find some actionable tips below, but you should also talk to your healthcare provider before starting a new exercise program or making major changes to your diet.

Gestational diabetes puts you and your child at risk

If you do develop this condition, it is critical that you carefully manage it during the pregnancy and take action after pregnancy to try to avoid future health problems.

Lifestyle behavior change (including exercise and a prescribed diet) is an essential component of management of gestational diabetes and may suffice for many women. Insulin should be added if needed to achieve glycemic targets. Insulin is the preferred medication for treating high blood sugars in gestational diabetes mellitus.

Can exercise help manage or even prevent gestational diabetes?

If exercise helps manage blood glucose levels, it makes sense that exercise might also help prevent gestational diabetes. Several researchers have asked this question and found that physical activity can do just that.

This study followed 99 women with gestational diabetes. These women were provided online education tools as well as personal dietary guidance from nutritionists and nurses. Half the women received only dietary training while the other half also completed a six-week resistance training program.

The women who went through the resistance training program performed moderate resistance activities three times a week under the supervision of a nutritionist, sports medicine expert, and the researcher. The women improved their gestational diabetes outcomes according to several measures:

How to incorporate resistance training into your routine

Incorporating physical activity into your routine can help you control your blood glucose levels and prevent or manage gestational diabetes. April Semon, Public Health Nutritionist with the New York State Department of Health, said, “Moderate physical activity is important for pregnant women but especially for women who have gestational diabetes. Moderate physical exercise can help insulin work better in the body and improve blood glucose levels.”

Semon added that any activity will help, but resistance training is a good option for those with gestational diabetes and for pregnant people in general. She described that in the second and third trimesters of pregnancy, people experience a forward shift in their center of gravity because of the growing fetus, which can make aerobic activity challenging. Resistance training is stable, which may make it easier and more comfortable. Even people on bedrest can perform resistance activities.

Your routine should target your major muscle groups, although you can spread the work out over multiple days. For example, you might target the upper body on one day, and the lower body on another. Here are some suggested resistance exercises (with descriptions) to do during pregnancy:

When working out, avoid motions that flex at the hips or waist as well as overhead lifting, as these can place too much stress on the lower back.

As always, listen to your body and rest when you need to. Consider working with a personal trainer who specializes in pregnancy if you need more guidance.

AJ
Adeline Jasinski
Adeline Jasinski graduated from Agnes Scott College in 2002 with degree in Biology. She went on to complete a Master of Science in Genetics & Development at Cornell University, where... Read the full bio »