Seeking Accord On ACCORD 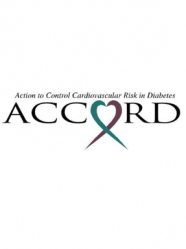 The objective of the Action to Control Cardiovascular Risk in Diabetes (ACCORD) trial was to determine the best way to decrease the high occurrence of heart attacks and stroke in people with type 2 diabetes. By now you may have heard about controversial results from this eight-year, 10,000-patient study. In this issue's What We're Reading, diaTribe will try to clarify these results; in some cases, we believe they’ve been misreported in the mainstream media. We hope you will share this information with other patients you know and your healthcare provider team.

The ACCORD study was designed to see how intensive blood glucose (primarily), blood pressure, and cholesterol control affected the incidence of heart disease and stroke in type 2 patients at high risk for these complications. The goal of the intensive-treatment arm of the trial was to lower A1c to less than 6.0 percent using a combination of oral therapies and/or insulin. Like any well-designed study, ACCORD also had a less intensive control arm to enable the researchers to conclusively say that any results obtained were actually due to the intensive intervention and not random chance. The goal of the less intensive group was to bring A1c between 7.9 percent and 7.0 percent. ACCORD was scheduled to monitor patients over four to eight years with an expected completion date in 2009.

In February, the intensive arm of the trial was halted by the Data Safety Monitoring Board (an independent group that ensures the safety of clinical trials) due to an unexpected increased risk of death associated with intensive diabetes treatment. This completely unanticipated result has left all of us, patients, doctors, diabetes educators, etc., with new questions and no clear answers. This uncertainty has been fueled by media coverage of the announcement, which, in our view, has blown the implications of the ACCORD findings out of proportion.

Fact: This Study Does Not Apply To All Type 2s Or To Any Type 1s

In early 2008, about a year and half before ACCORD was supposed to end, researchers performed a partial analysis of the available data as part of routine safety monitoring. In this analysis, they discovered that patients in the intensive treatment arm were 25 percent more likely to die from cardiovascular disease (e.g. heart attack) than were patients in the less-intensive treatment arm. This finding was the opposite of what everyone expected, given the huge amount of evidence to date that has conclusively shown a link between better blood glucose control, lower A1c and protection from long-term diabetes-related complications.

After performing the early analysis, the Data Safety Monitoring Board halted the intensive arm for ethical reasons. This required a public announcement, which was made almost immediately. Given the time pressure, the ACCORD researchers did not have time to publish their findings in a medical journal. As a result, what we've all been left with is only part of the analysis. We know that something unexpected has happened in a group of type 2 patients with high cardiovascular risk, but we don't really have any more specific information about this population. For example, we don't know if the extra deaths all occurred in patients who had already had a heart attack or who had signs of significant heart disease. The only way to answer these questions will be to look more carefully at the data once the full study is published, and we expect that to occur no later than June when the American Diabetes Association has its annual meeting.

The Action in Diabetes and Vascular Disease: PreterAx and DiamicroN MR Controlled Evaluation (ADVANCE) trial is the largest clinical trial on diabetes ever conducted, with over 11,000 patients being studied. This is a trial looking at intensive management in type 2s with high cardiovascular disease risk released interim results that seem contradictory to results from ACCORD. Professor John Chalmers, Chairman of the ADVANCE Management Committee commented in a press release, "Doctors and patients should feel reassured that the mortality trend reported by the ACCORD study has not been found in the interim results from ADVANCE. However, we need to await more definitive analyses and reports from both studies before drawing final conclusions."

Notably, the ADVANCE study population is broader than the one in ACCORD, and these differences should give us some important insights in the near future. For example, about 30 percent of the patients in ADVANCE already had known cardiovascular disease, compared to 50 percent in ACCORD. In our opinion, this makes the ADVANCE results more relevant to the average patient. Indeed what would seem to be clear from the ADVANCE announcement is that the ACCORD results may not be applied generally, even within the population of patients with type 2 and high cardiovascular disease risk.

defining what we do know

We know that some patients with type 2 diabetes are likely to be at increased risk of dying from heart disease during intensive therapy. We know that this doesn’t represent everybody with type 2 diabetes (not even close). We also know from previous studies that lowering A1c has enormous benefits in almost everyone with diabetes, type 1 or type 2; so absent any clear indication, safe and effective blood glucose control should remain the guiding principle of diabetes care. We know that poor blood glucose control is very dangerous, and suddenly straying from that goal could lead to substantial long-term complications in addition to heart disease – think damage to the eyes, kidneys, and feet.

Shortly after the ACCORD results were announced, the American Diabetes Association promptly put out a statement emphasizing the importance of tight glycemic control. Unfortunately, media coverage of the ACCORD announcement has minimized the ADA statement, and has amplified the ACCORD findings – sometimes without regard for the full findings, which are yet to be released. We find this kind of reporting irresponsible and believe it has fueled unnecessary panic among many people who have diabetes. In the view of many thought leaders in the field of diabetes, the biggest risk in the immediate future is that some patients or doctors will forgo safe and effective blood glucose control based on incomplete information. ACCORD does not refute earlier findings that showed the benefits of good blood glucose control, so using ACCORD to justify relaxing diabetes management standards would subject many patients to unnecessary risk. We urge you to have frank discussions with your healthcare team if you have any questions.

The ACCORD story won't be over until the final analysis is complete. Only then will we be able to better identify who is at risk and develop treatment protocols that protect people from the long-term consequences of hyperglycemia without increasing their risk of developing fatal heart disease. In the meantime, the only thing we can do is continue to follow guidelines showing the importance of good control and wait to learn more. We will continue to follow this story and will report back with the complete ACCORD interim analysis once it is released.