Why the emphasis on spacing? Why not focus on accurate carb counting? Glycemic index? Or better yet… something called healthy eating? While those are all important, we are doomed to fail miserably in our attempts to control glucose levels if we don’t pay careful attention to the timing of our meals and snacks.

The so-called “rapid-acting” insulin we use to offset the glucose rise from food is not as rapid as you might expect. All three rapid-acting insulin analogs (Humalog [lispro], Novolog [aspart], and Apidra [glulisine]) begin working 10-15 minutes after they enter the body. They take 60-90 minutes to reach “peak” activity and usually don’t finish working for three to four hours. These profiles hold true regardless of the injection site or whether the insulin is given via syringe, pen or pump (although insulin delivered by pump can work more slowly if delivered over an extended period of time). Compare this action profile to insulin secreted by the beta cells of a healthy pancreas: the insulin enters the circulation first. It starts working seconds after secretion, peaks in just a few minutes, and finishes just a few minutes later. Now that’s rapid!

Why the lesson in pharmacology? The timing of insulin action has everything to do with blood sugar levels after meals. In almost all instances, food digests and raises blood glucose levels faster than insulin can bring it back down. This is why most of us experience a temporary “spike” in blood glucose after meals. Because rapid insulin takes three to four hours to finish working, glucose levels don’t usually return to “normal” until that time - although this can vary depending on the type of food that you eat (e.g., it may take less time for blood glucose levels to return to normal with a low-carb meal). If you bolus and eat at noon, and your carb count was correct and your mealtime dosing formulas are set up properly, your blood sugar should settle back into your target range sometime between 3 PM and 4 PM (see Example 1 below). If you choose to eat again at mid-afternoon, the cycle starts anew (see Example 2 below). In either case, because you spaced your meals/snacks (let’s just call them “feedings”) more than three hours apart, the blood glucose had a chance to return to normal before you ate again. At each feeding, the glucose starts out near normal and returns to normal, so you don’t spend too much time above your target glucose range.

Example 1 – Eat at noon, and not again until dinner 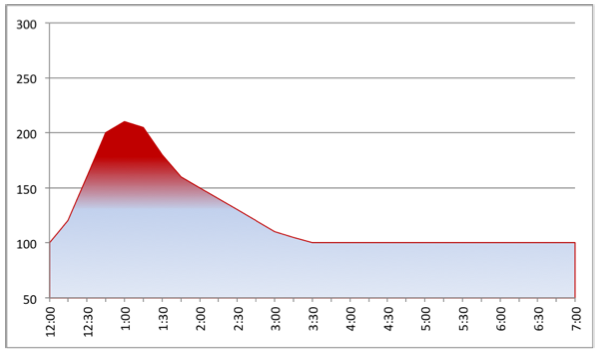 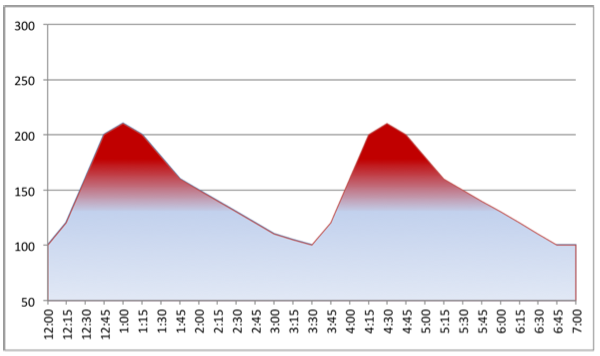 Now let’s see what happens when those feedings occur more frequently than every three to four hours. Consider what happens when a meal is eaten at noon, and then snacks are taken every 90 minutes until dinnertime. Even though bolus insulin is given with each “feeding,” the blood glucose at each subsequent snack is starting above normal since the bolus from the previous feeding did not have an opportunity to finish working. With each successive feeding, the glucose level rises higher and remains above target until the feedings stop for a while (see Example 3).

Instead of plugging the leak, you work feverishly to bail out the boat. This approach may keep the boat from sinking completely, but you will never have a dry boat until that leak is plugged. This is what happens when we “graze” or eat too frequently. The glucose level remains elevated until we finally stop eating and let the insulin bring the blood sugar down to normal.

Example 3 – Eat at noon and every 90 minutes until dinner 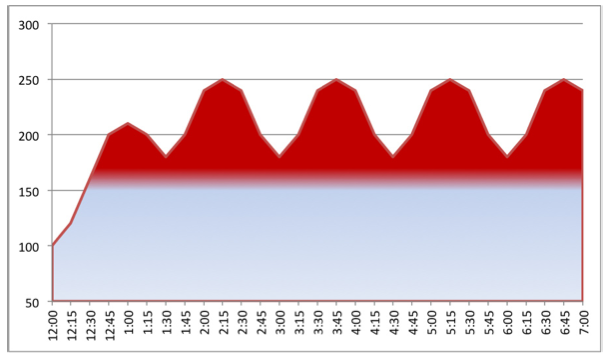 This is analogous to being on a boat that has sprung a leak. Instead of plugging the leak, you work feverishly to bail out the boat. This approach may keep the boat from sinking completely, but you will never have a dry boat until that leak is plugged. This is what happens when we “graze” or eat too frequently. The glucose level remains elevated until we finally stop eating and let the insulin bring the blood sugar down to normal. Stopping the food intake is like plugging the leak.

If you take rapid-acting insulin, it usually takes at least three hours for blood glucose levels to return to normal after a feeding, although again, this timing can vary depending on the type of meal you eat. The key, then, is to allow sufficient spacing between meals and snacks. If breakfast is at 8 AM, don’t eat again until at least 11 AM. If lunch is at 1 PM, don’t eat again until at least 4 PM. And so on.

Most people who are used to “grazing” have a tough time making the switch to spaced feedings. It may take a few weeks for the body to re-adjust to eating only at certain times of day. If you have difficulty fighting hunger between feedings, here are a few techniques that can help:

1. Distract yourself. If you’re sitting around watching TV or reading, your hunger will seem much stronger than it really is. Find ways to keep yourself occupied.

2. Exercise. Although exercise tends to produce a healthy appetite, it also tends to blunt hunger sensations in the short term.

3. Have “filling” foods. This is where the glycemic index can really help. Low-glycemic-index foods – such as dairy products, whole fruit, legumes, pasta, fresh vegetables, and even chocolate – will keep you satisfied much longer than high-glycemic-index foods such as potatoes, rice, bread, crackers, and cereal.

4. Fool your system. For many people, the act of chewing (gum, for example) helps to settle hunger cravings. Drinking extra water between meals causes the stomach to temporarily expand, which creates a sense of satiety.

5. Consider an incretin. Injectable medications such as Symlin (pramlintide), or incretins like Byetta (exenatide), Victoza (liraglutide) and Bydureon (exenatide once weekly) do a nice job of reducing hunger between meals. As always, of course, discuss this with your healthcare provider!

So if you’ve got the whole carb counting and bolusing thing down to a science but your blood sugar control isn’t where you would like it to be, it may be time to tackle the next great frontier… spacing!

Editor’s note: Gary Scheiner MS, CDE is Owner and Clinical Director of Integrated Diabetes Services, a private consulting practice located near Philadelphia for people with diabetes who utilize intensive insulin therapy. He is the author of several books, including Think Like A Pancreas (2nd edition). He and his team of Certified Diabetes Educators work with people throughout the world via phone and the internet. He is also “Dean” of Type-1 University (www.type1university.com), a web-based school of higher learning for insulin users. Gary can be reached at gary@integrateddiabetes.com, or toll-free at 877-735-3648; overseas call 00-1-610-642-6055.