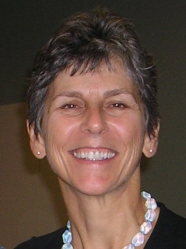 It is always heartening to see someone rewarded for a lifelong dedication to a good cause, Teresa Volpone is a perfect example of this. A diabetes educator and healthcare provider at Virginia Mason Medical Center in Seattle since 1990, Ms. Volpone is known for her compassionate work as a diabetes educator, pharmacist, and patient advocate. For her dedication and excellence in diabetes education, the American Association of Diabetes Educators (AADE) named Ms. Volpone National Diabetes Educator of the Year in 2007. She is the first pharmacist ever to receive the award. We recently had the chance to speak with Ms. Volpone about various treatment options for people with diabetes and the biggest barriers to improved care. It was fascinating!

Kelly Close: Thank you so much for taking the time to speak with us. To begin with, congratulations on receiving the AADE Educator of the Year award. Do you think you could tell us a little about how you got interested in diabetes education?

Teresa: In 1977, when I was still in training as a student, a gentleman came into our pharmacy and got syringes and insulin, and he didn’t have the faintest idea what to do. It was immediately clear to me that if I knew about insulin, and I knew about giving injections, I would actually be able to help him. That was the pivotal point in becoming interested in diabetes.

Kelly: Wow, that’s wonderful. Could you talk about Virginia Mason’s approach to diabetes?

Teresa: At Virginia Mason, we have always focused on how to put control in the hands of people with diabetes instead of just having them wait for us to tell them what to do. When I first worked there, we had week-long classes that included management, foods, and everything. And the physicians have been very active participants.

Kelly: Do you still have the week-long classes, or is it a problem where now people can’t get that reimbursed?

Teresa: People are not getting that reimbursed so we have been moving toward shorter classes. Just recently, I went into a class that’s been very, very condensed to just two days.

Kelly: It just seems crazy to me that treatment for the biggest public health problem of our time is so poorly reimbursed. Can you talk a bit about that?

Teresa: It is frustrating, but the key thing to realize is that nobody reimburses for preventative lifestyle. You know the old story that insurance companies don’t look into the future; they just look at what their costs are at the moment. It goes back to getting into our legislatures and saying, “this has got to change.” There’s got to be a push on insurance companies or on general programs, community programs, to change stuff.

Kelly: What do you think about that?

Teresa: I’ve always thought that the most important part of class was actually the hands-on food/nutrition education. And in two days they don’t really get much practice with that. We do the best we can. We do have the cafeteria in our area where patients make their own selections, and then we discuss their meals with them. It’s still just the tip of the iceberg. I remember on our old intake surveys, the number one thing people wanted to know about was food.

Kelly: Yes, I definitely understand that - whew, is it challenging! Could you talk more broadly about the different types of education that patients are getting out there? We keep hearing these statistics about 40-50% of people with diabetes not being at goal. Education must have something to do with it.

Teresa: I think the people who have diabetes need to want to be at goal. It’s two things, really: wanting something, and then having the motivation or – I hate to say it – the will to do it. You just say to yourself, “I will do this,” instead of actually doing it. Maybe it has something to do with the aspect of having a chronic disease. It’s not something that goes away, so your rewards aren’t very easy to see.

Jim Hirsch: So what do you do as an educator for someone whose will is not always 100 percent?

Teresa: I try to tailor the goal to the patient. I’ll say, “Here’s what is recommended and from what we have seen from the history of diabetes, it looks like in the long term, the complications of diabetes are reduced. So, now that I’ve said that, what does that mean to you? I just said something based on what scientists believe, but what do you think about having diabetes? What is it you would like to have happen? What is the most important part for you? Why would you not want to have the complications?”

Jim: I realize it’s difficult to generalize because the patient population in diabetes is so broad, but I was wondering if you could share any insights or general rules about what has worked for you over the years to help patients achieve good health?

Teresa: I try to feel out what they’re willing to do and not do at that moment. If, for example, they’re not ready to do something about their blood pressure at that visit, I just hope that next time we meet we can touch all the bases again.

Jim: Do you give the patient who is ready a clear game plan? For example, “If we want to lower your blood pressure, you do things X-Y-Z.”

Teresa: Yes. Usually I will say, “Let’s do this as far as the blood pressure, and here’s what we would ultimately like to see, because we know this reduces your risk of stroke.” We use stroke a lot, because it seems to mean more to people than having a heart attack. They think, “I’ll just go in and get fixed,” if they have a heart attack. But then I will also say, “You told me in the meantime you know your blood sugars aren’t so good, and you hate testing. What do you think about testing on Mondays and Wednesdays? Do you think you could manage two tests a week?” (for example, for people with type 2 diabetes not on insulin who are close to their goal)

Jim: So if the individual comes back to you next time and they were not able to do those goals that you laid out together, what do you do then?

Teresa: If there was a successful portion, we’ll talk about that. Then I will say, “What got in the way of your other plans? What made this difficult for you?” And then we just try to talk through it again. I think it’s about constantly re-visiting the barrier. One method I like to use is to say, “What if your best friend found out they had diabetes? What would you tell them?” Then I’ll say, “So how do you think that applies to you?” It helps to remove oneself from the equation and see things a little more clearly.

Kelly: We recently did a survey of about 500 medical school students and there were just three that were interested in going into diabetes. Three out of 500! There were even people who were diabetic who didn’t want to go into this area, and the reasons they stated had a lot to do with reimbursement. And then it’s a long training and there’s not that much glory in it. You see the cardiologists giving high-fives and the families thanking them so much for saving lives. It would be interesting to hear what you think about this because you have obviously helped so many people, but we hear a lot that nobody says thank you for saving them from a heart attack.

Teresa: It’s strange, but I think when people come back to that next appointment, the reason they come back is because they have gotten something. I think that’s sort of a ‘thanks’ in some ways

Kelly: So switching gears! Let's talk about blood glucose monitoring. What about the trend toward lowering post-prandial blood glucose? How important do you think that is?

Teresa: I do believe controlling post-prandial blood sugar is more important than we assume, but I’m sort of stymied about what the best way to do it is. It is clearly a critical piece to achieve. If we really think people’s blood sugars have to be optimal, the only way we’re going to get there is by addressing the post-prandial blood sugar as well. There’s no way to get around it. I think maybe the DPP-4 inhibitors or the GLP-1s might be the answer.

Kelly: Can you say how important you think glycemic variability is?

Teresa: I just have to quote Irl [Hirsch]. What I do know is that people feel lousy when they have high glycemic variability and there must be something to that. If you feel lousy, it’s not just affecting you psychologically. There’s something going on there that’s probably not good. If swinging up and down was normal, we’d all be doing it, whether we had diabetes or not.

Kelly: Would you recommend that type 1s try continuous monitoring? Is that something that you’ve had many patients on?

Teresa: Well, if I had to pick a technology, continuous glucose monitoring at home has huge value for many people, especially those who don’t sense their lows. To me that’s a no-brainer. I think insurance companies should be covering it. If you had an easily acceptable format where you could just put it on and wear it – of course you still have to do some blood glucose checks and some data entry calibrations – it would be a fabulous tool. I know people who put patients on pumps and then start them on a sensor and it sure makes tremendous sense to me. I don’t think insurance companies right now would put up with me doing it, though.

Kelly: Do you have any type 2s on pumps?

Teresa: I work with one gentleman who’s a type 2 on a pump. We have about four or five people who probably inherited insulin resistance who are on the pump.

Kelly: From a type 1 perspective, how would I even figure out if I have insulin resistance?

Teresa: I just read an old, old article about the amount of insulin produced by a person that doesn’t have diabetes. It turns out to be about 45 units a day. So when you start getting to where you’re exceeding that by quite a bit, it suggests that there’s resistance. Or you’re eating lots and lots and lots of carbs.

Kelly: Before we finish up, I just wondered broadly what advice you have for patients with diabetes today? And let’s say it’s the average patient who has an A1c of 10 or maybe eight, and who wants to do better. If they could do two things, what would you most recommend?

Teresa: First, that they ask their doctor to give them a snapshot of what’s going on as far as their diabetes health is concerned. Second would be to take a look at their feet.

Kelly: Great, thank you. We certainly know from our advisory board, as you say, how absolutely critical foot care is, how important it is to watch your feet all the time and avoid cuts, infections, etc - that is great advice. Just one more question: at AADE, what was it like for you to receive the Educator of the Year Award?

Teresa: It was a total surprise. I’m very humbled by it. I feel it’s a huge responsibility. I think of it as a way to honor the people I work with.

Kelly: Wow. That’s wonderful. Congratulations again, and thank you so much for taking the time to speak with us.