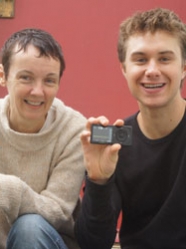 Although the FDA first approved personal CGM over a decade ago (Cygnus’ GlucoWatch in 2001), a new device for personal use has not been approved since Dexcom’s Seven Plus in 2009. Encouragingly, the FDA ended the dry spell in October by approving Dexcom’s new G4 Platinum CGM system (the “G4” stands for fourth generation, since this product follows the STS, Seven, and Seven Plus). With Kelly and Adam’s (many!) combined years of experience using the Seven Plus (a great product in its own right), what follows is our early take on our favorite improvements in the G4 Platinum, namely in 1) improved accuracy and reliability; 2) a sleeker receiver design; and 3) an extended transmission range.

In the past, we found that the Seven Plus also had occasional problems with outlier values – those CGM readings that deviate considerably from actual blood glucose values. For instance, one study showed that a Dexcom Seven Plus sensor chosen at random has on average 19 hours per month of large errors over 50% (e.g., a blood glucose meter reading of 100 mg/dl vs. a corresponding CGM reading of 150 mg/dl or 50 mg/dl). Through an improved sensor membrane design and better algorithms, the G4 Platinum has reduced the likelihood of these outlier values. In other words, not only is the system’s average accuracy better, but the accuracy range is also narrower.

A last minor frustration with the Seven Plus was the “???” display. When that happened, no glucose data would appear, and the user could only hope the sensor came back online or prompted for a calibration. These errors sometimes lasted for quite awhile and in some cases required changing the sensor before seven days were up. While the G4 Platinum can still have these errors in theory, we have not had any so far in our experiences with multiple seven-day sensor sessions. 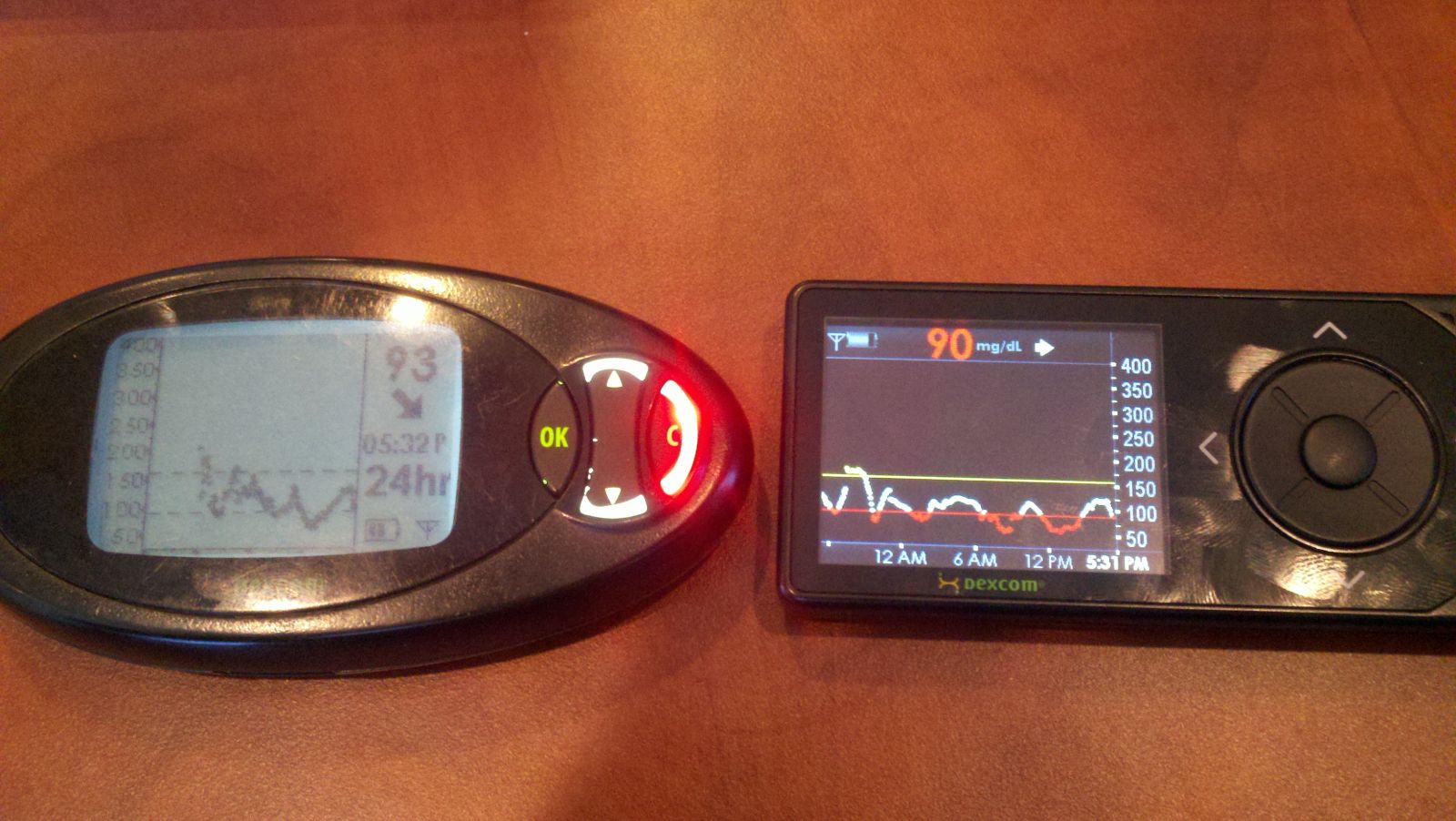 The G4 Platinum has a completely new receiver profile that is 30% lighter and 59% smaller than the larger Seven Plus receiver (4 in x 1.8 in x 0.5 in and 2.4 ounces vs. 4.5 in x 2.3 in x 0.85 in and 3.5 ounces). The most noticeable size improvement comes in thickness – at 0.5 inches, the G4 Platinum receiver is particularly easier and more comfortable to wear in a pants pocket than the Seven Plus. More generally, the look and feel of the receiver is just smoother and sleeker – it looks more like an MP3 player than a medical device. We’ll be surprised if we ever get an “is that a beeper?”-comment with the G4 Platinum.

We’ve seen lately more and more diabetes devices with color screens, and we were psyched to see that the G4 Platinum is no exception. Seeing CGM data in color is a meaningful improvement over the gray Seven Plus receiver screen. The G4 Platinum’s screen is high contrast, full color, and easy to see in most lighting conditions. We particularly valued the coloring on the home screen trend graph, which colors hypoglycemic values in red, in-range values in white, and hyperglycemic values in yellow (ranges are set by the user and can be changed in the settings menu). Seeing the trend graphs in color made it very easy to see how much time we were spending in range vs. out of range and made it particularly easy to spot problematic times of the day with lots of hypo- or hyperglycemia.

The G4 Platinum receiver has two other valuable improvements over the Seven Plus. First, the alarms are much louder and more customizable through the addition of a “Profiles” menu. It’s still possible to sleep through them, but we both found we’re more likely to wake up and respond at night with the G4 Platinum than with the Seven Plus. The other big improvement is the inclusion of a micro-USB port for charging the battery and uploading data to the new PC-based Studio software (unfortunately still not Mac compatible). Micro- and mini-USB cables have been part of the last five devices we’ve test driven (Tandem’s t:slim pump, LifeScan’s OneTouch Verio IQ, Abbott’s FreeStyle InsuLinx, Sanofi’s iBGStar, Telcare’s meter), which is great – the fewer different cables, the better (especially since micro- and mini-USB cables are also commonly used for cell phones, cameras, and other consumer electronics). Although Kelly lost (“misplaced temporarily”) the charger that came with her G4 Platinum, we were able to patch one together using the wall outlet plug from a Verio IQ meter and the cable from a FreeStyle InsuLinx meter. Now that’s interoperability! 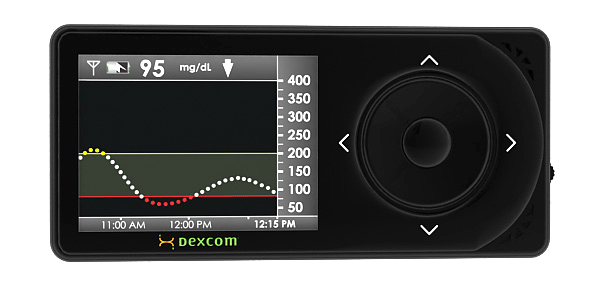 We encountered two main drawbacks to the new receiver. First, similar to the Seven Plus, the G4 Platinum trend graph on the home screen displays a range from 0-400 mg/dl. For many patients that don’t typically have excursions that go up to 400 mg/dl, this means that much of the home screen is wasted, unused black space. Lamentably, we believe this is an FDA requirement, and we hope it will be customizable on CGMs in the future. One change that we really don’t yet like is that the time of day has now been moved to the bottom right of the x-axis on the trend graph. It’s still there, but it’s not as large or as noticeable as it was on the Seven Plus home screen.

The G4 Platinum has a new transmitter design that has two major benefits. First, the wireless communication range between the transmitter and receiver is significantly longer – over 20 feet with the G4 Platinum vs. five feet for the Seven Plus. Moreover, while the Seven Plus transmitter often failed to deliver data to the receiver even when it was within five feet, data gaps are incredibly rare with the G4 Platinum. In fact, we found it can transmit through multiple floors of a house and as much as 50 feet away when it’s in line of sight. This should be particularly valuable for parents that like to monitor their children’s glucose in another room of the house or on the sidelines of an athletic event – our friend Christine Varon, mother to seven-year-old Lilly, can’t wait for her daughter to use it during swim practices and meets.

A minor drawback of the new G4 Platinum transmitter is that it is a tenth of an inch thicker and sits a bit higher off the body than the Seven Plus transmitter. It was noticeably bigger at first glance, though this was less perceptible once it was on the body. Without a doubt, we believe the much improved transmission range and reliability are worth the price of the marginally larger transmitter.

We've done a lot of research on the pricing! Insurance coverage of CGM has improved dramatically over time – largely through the help of JDRF, patients with type 1 have experienced good success getting their CGM covered. Now, some specifics!

1. What's the price? Ultimately, most patients should receive a discounted price of about $800 for the G4 Platinum starter kit, which includes the receiver, transmitter, and charger. Although the actual cash price is $1,198, most insurers have agreements with Dexcom to pay a discounted price for the patients they cover – the benefits of buying in bulk!

A sensor four-pack will have an official cash price of $349, which will drop to a discounted price of about $260 depending on the insurer. The discounted costs for the sensor system ($800) and a sensor four-pack ($260) are roughly the same as the costs to start on the Seven Plus – we salute Dexcom for not asking patients to pay more for the G4 Platinum starter kit or for the new sensors.

2. Can I upgrade for a lower price? If your Seven Plus is still in warranty, meaning it was replaced or newly acquired in the last year, you can upgrade to the G4 Platinum for $399.

3. What if I don't qualify for an upgrade? At diaTribe, we have Aetna insurance; while neither Adam nor Kelly qualified for the $399 "upgrade" price (they both got Seven Plus systems over a year ago), they were lucky that diaTribe/Close Concerns paid the bill! Specifically, the out of pocket cost for a brand new G4 system and three months of sensors was a total of $840. We're very lucky to have good insurance and an employer who covers the costs for CGM.

4. What should I expect if I'm new to CGM? If you are just starting on CGM now, your doctor or CDE may have to do a lot of legwork through paperwork to get this for you, but over 95% of the people on Dexcom systems do have insurers who cover the costs. So keep trying if you don't succeed at first and see here for some background on how to work with payors. The best way to determine what it will cost for you to start on the G4 Platinum is to contact Dexcom. The G4 Platinum started shipping earlier this week and more information (including videos and insurance forms) is available on www.dexcom.com.

* A lower value represents better accuracy. This metric, known as the mean absolute relative difference (MARD), pairs CGM values with blood glucose values and calculates the percent error at each time point. The percent errors are then averaged to obtain the MARD.