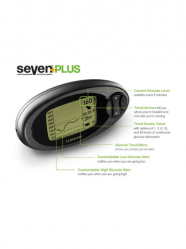 Continuous glucose monitoring is one of the most eagerly anticipated diabetes products in recent history. So, shortly after its approval in March 2006, three of us at diaTribe ordered the DexCom Short-Term Sensor (STS). It was the first real-time continuous glucose monitor to reach the market in a meaningful way. (Medtronics Guardian RT made a cameo in seven cities, but relatively few patients had access to it at the time of DexComs launch.)

The product is clearly valuable, specifically the trending data that allow us to catch extreme highs or lows; but we don't see it replacing finger sticks for a while. Inaccurate glucose values undermine its reliability, and insurers don't yet cover it, so its high cost makes it impractical for all but the wealthiest.

It was immediately clear that the STS had many pluses, including its small, sleek design. The product has several pieces: a receiver, a transmitter, a sensor, a cord, and an applicator. The sensor is inserted into the abdomen with a disposable plastic insertion device. A white adhesive patch and a small plastic holder for the transmitter remain on your skin. The transmitter is a thin, oval piece of plastic that rests on your skin and beams glucose values to the receiver, which displays your blood sugar values. The cord connects and calibrates the transmitter and the receiver. Insertion hurts a little - not as much as inserting a traditional pump set, but more than a finger stick.

a valuable graph for blood sugars

The receiver's value is updated every five minutes. With the push of a button, you can see your current glucose value alongside a graph plotting the past hours values; one more press of a button shows a three-hour tracing and then a nine-hour graph. The screens are simple and include customized high and low lines that demarcate the desired glucose range. Alerts are also customized, although the alarm for a low under 55 mg/dL is preset.

Not surprisingly, we found tremendous value in the information. Specifically, we learned a great deal by watching blood glucose numbers rise or fall in response to a meal, insulin, or exercise. Within the first few days, we found that we started making immediate changes in the way we approached our care - seeing the time action of insulin, for example, helped us space out the time between our injection or bolus and the meal. We saw the effect of various types of food on glucose and changed our diets accordingly; we caught lows at 70 mg/dL rather than 50 mg/dL. Additionally, we saw how many hours or minutes we typically spent above or below range. We "corrected" more often.

Continuous glucose monitoring showed us just how inadequate episodic testing is, even if we tested quite frequently. In fact, a key study in Diabetes Care showed that even people testing over nine times a day spent only 29% of the time in the right range - unbelievable!

accuracy can be a problem

But how reliable is the information? After using the first generation STS device, we know it's not ready to server as a replacement for finger sticks. While the blood glucose values are sometimes dead on, they can also be substantially off. In the euglycemic (good blood glucose) range, we found that the STS readings were fairly accurate (off by perhaps 5-20 mg/dL), but that's a narrow range. At the extreme, 70 mg/dL means something different than 90 mg/dL. At higher values, there are times when the STS can be off by 100 mg/dL or even more.

Although the trend information is quite valuable in allowing us to avoid severe highs and lows, more information is needed to dose insulin. If you're jogging and trending down as expected, a reading of 60 mg/dL will cause you to stop whereas a reading of 90 mg/dL may not. Similarly, if you just ate a high-carb meal and expect an upward trend, a reading on the DexCom of 260 mg/dL might spur you to take additional insulin whereas a value on the meter of 160 mg/dL might not. Thus, even after using it for a while, we still typically tested before taking any insulin - just as the label instructs. It's not quite reliable enough yet for insulin dosing. While we can't wait for continuous monitoring to be so accurate that we won't have to test before bolusing, we didn't really expect it to happen on this first round. Although we hear a fair amount of complaints about accuracy, we find that accuracy isn't really what we're using it for. As Dr. Nancy Bohannon, an endocrinologist in San Francisco, says, "You're using it for clinical utility - and you're getting it!"

Even more frustrating than inaccurate numbers were no numbers at all. On at least two occasions, a morning fingerstick read low at 50 mg/dL even though STS had given no warning - because it had stopped reading four hours ago. Sometimes the readings would stop when glucose levels were rising or falling rapidly. If the number on the STS was very different from a meter reading (the STS works with the OneTouch Ultra only) and the two were in sync, the readings would abruptly stop. Until this device reads continuously with fewer interruptions, we wouldn't consider it a fool-proof hypoglycemic alarm. We found several other negatives with the STS. First, a number of sensors failed to work at all. The good news is that the DexCom customer support line was very helpful. Then there is also the high hassle factor - wearing the STS requires carrying around the cable to connect the One Touch Ultra to the STS for calibration at least once every twelve hours, and wearing a shower patch since it isn't yet waterproof.

high cost could deter use

The biggest negative, however, is the high cost of the system and the sensors. While we have insurance, this device isn't covered yet. From what we know, your insurance probably won't cover it either at this stage. The DexCom receiver and transmitter system costs $800 and each new sensor is $35. That's over $250 per month for the sensors alone! Frankly, that makes the reliability problems even more unsettling.

But problems aside, we don't want to give up the STS. The allure is still strong. What makes diabetes, particularly type 1, so difficult is its unpredictability, and this product finally allows patients to better monitor the fluctuations and to respond accordingly. We are ultimately optimistic about STS as a first-generation product. Weve had diabetes long enough to remember the first blood glucose monitors, with those giant blood drops, the painfully slow time, and the errors - wouldn't you just cringe when you got those error codes!? Just as that technology got much better, this will too. In fact, Minimed has combined the pump and the monitor, and we start testing that system shortly. We'll let you know how it goes.