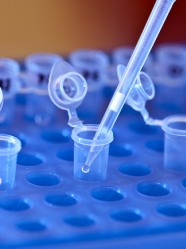 This four-month trial is testing the effect of combining Victoza (liraglutide) and Invokana (canagliflozin) on several outcomes, including A1c and the liver’s production of glucose in people with type 2 diabetes. Victoza is a once-daily GLP-1 agonist (taken as an injection) made by Novo Nordisk, and Invokana is a once-daily SGLT-2 inhibitor (taken as a pill) made by Johnson & Johnson. It’s great from our view to see these two therapies from such major competitors being tested together. In this study, the primary outcome is measuring the combination’s effect on the liver’s glucose production. The trial will also examine the combination’s effects on A1c, fasting glucose level, and oral glucose tolerance (as measured by the oral glucose tolerance test), and body fat. There are currently no approved combination drugs of GLP-1 agonist + SGLT-2 inhibitors, but there is one other trial (still recruiting!) testing combination therapy using Bydureon (GLP-1 agonist, exenatide once-weekly) and Farxiga (SGLT-2 inhibitor, dapagliflozin once-daily) – AstraZeneca makes both compounds. In theory, combining these two different classes might improve the overall efficacy compared to using either drug alone.

The trial aims to enroll 90 participants with type 2 diabetes. To participate, volunteers must be between 18 and 70 years of age, have an A1c between 7.0% and 10.0%, have a stable weight (no more than three pounds gained or lost) throughout the previous three months, and be drug naïve (not taking other drugs for diabetes) or on a stable dose of metformin for at least three months. Exclusion criteria include taking drugs known to affect metabolism (other than metformin) and having known evidence of retinopathy or impaired kidney function, among others. The trial is currently only located in San Antonio, TX. For more information on the trial, please contact Dr. Ralph DeFronzo (210-567-6691, defronzo@uthscsa.edu) or Dr. Eugenio Cersosimo (210-358-7200, cersosimo@uthscsa.edu) or visit the trial’s posting on ClinicalTrials.gov.

It is very exciting to see movement towards combined treatment with these two drug classes. Both Invokana and Victoza have been very well received by patients, healthcare providers, and insurance companies: Invokana has had tremendous success in its first couple of years on the market, and Victoza is by far the most popular GLP-1 agonist. While it’s too soon to tell if this combination will prove effective for patients, this trial demonstrates the increasing push towards combination drugs as a key player in the future of diabetes management. -AJW