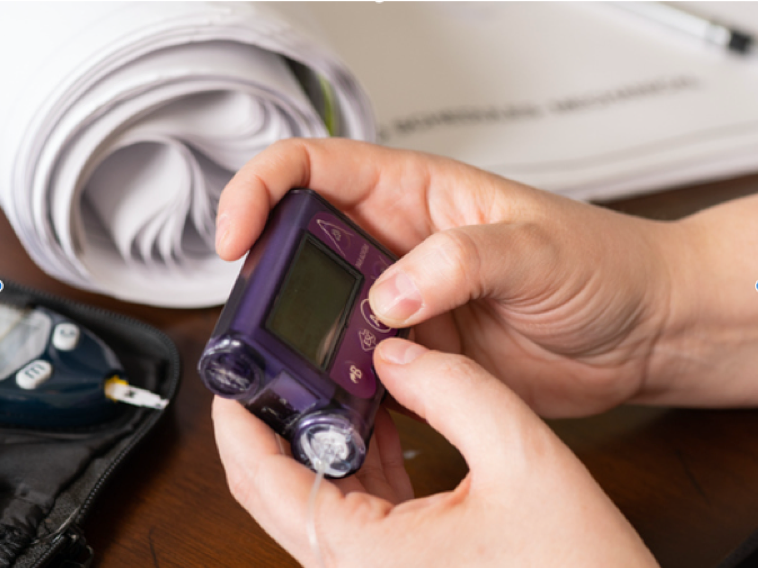 By Frida Velcani and Karena Yan

Insulin pumps are devices that deliver insulin without the need for manual injections. Pumps provide fast-acting insulin through a small tube placed under the skin, delivering two types of doses:

Pumps give insulin based on pre-programmed basal and bolus settings – read more about these settings below!

The goal of basal insulin is to hold blood glucose levels steady when you are not eating – ideally within a 30 mg/dl range (such as 90 to 120 mg/dl). With the help of a healthcare professional, you can program one or more basal rate settings in your pump.

Basal insulin rate is the rate at which an insulin pump provides small, “background” doses of fast-acting insulin. The rate is usually programmed as a number of units per hour (“U/h”) during a certain time period. For example, someone could program their pump to deliver 1 U/h from 9am-5pm and 0.7 U/h from 5pm-9am.

When you first start using an insulin pump, your healthcare professional will help you determine your initial basal rate and then carefully adjust your basal profiles based on frequent blood glucose self-monitoring. The ability to precisely adjust basal rates is one big advantage pumps have over once-daily basal injections. You can read more about basal rate testing here.

Users can also set temporary basal rates (“temp basal”) for specific activities, like exercise. For example, someone might program a 50% reduction in basal rate for a long bike ride. After a set period of time, the pump will return to the normal pattern.

All modern insulin pumps have a built-in bolus calculator to figure out how much insulin to take for a meal or for correcting blood sugars. These are the standard bolus calculator settings and terms, with each explained below:

Target blood glucose or “target range” is your desired blood glucose level. It can be entered into a pump’s settings as a single target for the entire day (e.g., 120 mg/dl) or as a range (e.g., 100-120 mg/dl). Pumps usually allow you to set different targets for different times of day – e.g., 100 mg/dl in the morning, 120 mg/dl at night. The bolus calculator uses this target to determine how much correction insulin to recommend in cases of high blood sugar. For example, if the target is set at 100 mg/dl, and current blood sugar is 175 mg/dl, the bolus calculator will recommend more correction insulin to reduce blood glucose by 75 mg/dl.

Insulin sensitivity factor (ISF) or “correction factor” is how much one unit of insulin is expected to lower blood sugar. For example, if 1 unit of insulin will drop your blood sugar by 25 mg/dl, then your insulin sensitivity factor is 1:25. In the example above, the pump would recommend 3 units of insulin to bring blood glucose from 175 mg/dl down to 100 mg/dl. Different ISFs can be pre-programmed for different times of the day – e.g., many people are more insulin resistant in the morning, which requires a stronger correction factor.

Duration of insulin action (DIA) (or active insulin time) is how long a bolus of insulin takes to finish lowering blood glucose. The DIA time starts when a bolus is given and ends when the bolus is no longer lowering blood glucose levels. An accurate DIA will minimize insulin stacking and low blood sugar (hypoglycemia), which can happen when boluses are given too close together.

As expert educator Gary Scheiner shared at Friends for Life this year, “DIA varies from person to person, and CGM is the best way to figure it out.” He recommends doing calculating DIA when your glucose is high – take a correction bolus (without food) and watch the CGM until it levels off. “These are important numbers to get right. If you underestimate it, you’ll have frequent lows. If you overestimate it, you’ll have highs.” The number can change over different ages; Mr. Scheiner said most adults have a DIA of 4-4.5 hours, while most kids have a DIA of 3-3.5 hours.

Insulin on board (IOB) is how much insulin is still active inside the body from the previous bolus dose. It is calculated based on your DIA, though the exact calculation varies depending on the pump. Roughly speaking, for a DIA of three hours, a three-unit bolus dose taken at 12pm would have about one unit of IOB remaining two hours later, at 2pm. IOB is important to take into account, as it can help avoid insulin stacking. This is also helpful at bedtime when determining whether or not you need more insulin to cover a high reading.

In the future, we’ll talk more about pump therapy, particularly as we move towards automated insulin delivery and its benefits.