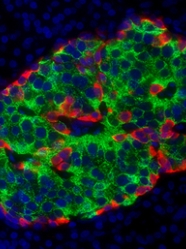 In March, we had the opportunity to attend the 13th Rachmiel Levine Diabetes and Obesity Symposium in Pasadena, CA, from March 13-16. The conference dealt with a variety of topics, focusing on basic science research in type 1 diabetes. Presentations addressed several different approaches to finding a cure, and leading experts also discussed how to improve research efforts.

Necessary Steps for Greater Success in the Search for a Cure

During the conference, Drs. Richard Insel (JDRF, New York) and David Harlan (University of Massachusetts School of Medicine, Worcester, MA) discussed how the aims of research design, methodology, and trials must evolve. Both scientists noted the successes and limitations of what previous cure research has shown us, and the necessary steps to move the field forward.

Dr. Insel explained how to optimize type 1 diabetes clinical trial design. He began his presentation by reviewing some of the successes in the field. He cited the DCCT – a landmark trial that followed people for ten years and demonstrated that greater glycemic control reduces complications – as a very important study that shows the crucial benefits of managing diabetes better. With currently available therapies, people diagnosed with type 1 diabetes today (on average) are able to live close to normal lifespans – a marvelous statement that has been many decades of research and therapy development in the making. However, they remain at risk for developing serious diabetic complications. There are only a limited number of therapies that have provided a reprieve from diabetes care or risk of complications, if only temporarily, in a subsection of people. For instance, cadaver islet transplantation can induce insulin independence for up to five years in over 50% of transplant recipients with current protocols. Additionally, anti-vascular endothelial growth factor therapies, which prevent excess blood vessel growth, can treat diabetic retinopathy and even improve eyesight. However, further refining research designs will be required to make other clinically impactful therapies available more quickly.

Dr. Insel gave a number of recommendations for how to conduct a trial for type 1 diabetes. He noted that trial design needs to better account for the underlying pathogenesis of the disease – how the condition progresses. In addition, we still lack basic insights into the pathogenesis of human type 1 diabetes and need to make improvements on this front as well. Another recommendation was to target both beta cells and the immune system instead of focusing on just one or the other, because there is profound cross-talk between the two systems. He also asked researchers to take into account the heterogeneity of the population with type 1 diabetes and the need to consider a patient’s age, duration of diabetes, and genetic background and adopt a precision medicine approach to the disease, which means tailoring medical treatment to individual characteristics of each patient. Last, he spoke of the importance of using biomarkers to identify different aspects of the condition’s progression. Biomarkers are proteins, antibodies, or other molecules that give insight into what is happening inside the body. With the right biomarkers, researchers can potentially track if a therapy is showing a positive effect earlier in a trial. They can also determine who in a group of people might respond better to a particular therapy and who might not be a candidate at all. His general guidelines for designing a trial were clear and logical, and we hope that many in the audience were inspired to reevaluate their own projects after the talk.

Dr. Harlan discussed recent-onset trials and echoed Dr. Insel’s message that we need to better understand how type 1 diabetes develops and progresses. He noted that there are some basic facts that we are still struggling to determine, such as not knowing how many beta cells a person has before they develop type 1 diabetes. At the same time, he argued, we have made some gains. Historically, it was believed that beta cells are passively destroyed. However, we’ve now learned that beta cells’ response to the immune system’s attack might determine how long they survive and therefore how long they can produce insulin. This understanding is influencing therapeutic research today.

Another point that Dr. Harlan emphasized was that researchers, both in academia and pharmaceuticals, will need to find therapies that are reasonable options for patients. People with type 1 diabetes now live longer than ever before, and Dr. Harlan emphasized that we need therapies safe enough to make it worthwhile for patients to take them. If a potential therapy’s benefit-to-risk profile favors the latter too much, the therapy will not be viable. Additionally, he argued that the genetic, immunological, and physiological diversity associated with type 1 diabetes has been a large barrier to finding a cure. A greater understanding of type 1 diabetes in these areas will likely benefit the research that has already been done.

Researchers presented many talks on a wide array of new projects. These varied from encapsulated cell therapy – a pouch of pancreatic cells that release insulin, glucagon, and other pancreatic hormones – to using a vaccine with salmonella to deliver protein therapies. The conference showcased research projects that are in very early stages and that need to be extensively studied before they can begin to reach people. However, it’s inspiring to see the avenues scientists are exploring.

In one interesting study, researchers are using the gut immune system to deliver therapies. Dr. Chantal Mathieu (Katholieke Universiteit, Leuven, Belgium) and her colleagues are using genetically modified lactococcus lactis (bacteria used to make dairy products) to stop the immune system from attacking beta cells. The modifications make the bacteria secrete pro-insulin (the molecule insulin is made from) and interleukin-10 (IL-10; an anti-inflammatory immune system signaling molecule). The researchers examined if feeding these genetically modified bacteria to mice with symptoms of type 1 diabetes could stop the autoimmune attack on beta cells. Researchers hoped that by “presenting” the pro-insulin and IL-10 molecules to the GI tract, the entire immune system would learn to recognize that pro-insulin is safe and stop attacking beta cells. When the mice ingested these bacteria and were treated with a third compound, anti-CD3 (an immune system suppressor), there was long-lasting reversal of diabetes in 59% of the mice. Of course, this is a pre-clinical study done in mice, and past therapies have cured diabetes in mice over 400 times without producing similar results in humans. However, researchers are using creative methods to try to find a cure.