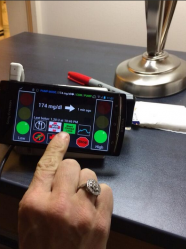 There has been so much progress recently with automated insulin delivery technologies, and I am always excited to learn about new prospects and choices for patients (see my recent test drive of the Beacon Hill bionic pancreas trial). So, when I heard about the University of Virginia (UVA) study testing overnight closed-loop control, I jumped!

Over five days, the superb team at UVA let me wear the study’s DiAs (short for “diabetes assistant”) system at night. DiAs is an artificial pancreas system that doses insulin automatically, based on continuous glucose readings. The 'hardware' consists of a Roche Combo pump, two Dexcom CGMs [the second CGM is used as a backup at the FDA’s request], and a control algorithm running on an Android cell phone. A Dexcom Share is used to transfer the CGM data from the receiver to the DiAs system, although we expect this intermediate device won’t be necessary when truly wireless sensors come out (there has been lots of progress coming on that front as we understand it).

The control algorithm is called the USS Virginia, and it is designed to take control after dinner, maintain safe glucose levels overnight, and target a normal fasting morning glucose (e.g. 80-120 mg/dl) to “reset” for the new day. Using the Dexcom CGM readings, the algorithm directs the pump to give me the appropriate amount of insulin overnight to reach a target blood glucose of 120 mg/dl.

I lived in the groovy 1880s Victorian “research house” at UVA called Sunnyside that had four bedrooms, and lots of cozy places to work; the UVA team remotely monitored me from an adjacent room, though I was effectively on my own. I loved being in the house, as it had many researchers, scientists, inventors, and MDs roaming around. This was my idea of heaven!

Overnight closed-loop was powerful in a way I was not expecting. Every night, I settled down to bed at 11pm and turned on the system – how cool was it to push on my Android phone ‘CLOSED-LOOP ON.”  And then as I drifted off to sleep, the best part of all happened – nothing. I didn’t wake up in the middle of the night with a blood sugar of 54 mg/dl. I wasn’t tired in the morning from a night spent at 180 mg/dl (where my Dexcom often hovers). Instead, for five straight days, I woke up at 7 am with a blood glucose of 120 mg/dl, having spent most of the last eight hours at that level. It felt incredible – and it felt different than just waking up at 120 mg/dl, which is possible when I hear my Dexcom alarms at night and adjust them appropriately. Here, it was all about the machine doing the work.

So often when I wake up, I’m fixing something or my husband Johnny is helping or fixing stuff for me. We hear my CGM beep, look at a meter reading, and immediately start troubleshooting – Why am I high? How much fat was really in that meal? Did I exercise more today than yesterday? Or, why am I low? I know I’m insulin sensitive in the morning, but it’s anyone’s guess when this sensitivity changes – most people with diabetes are more insulin resistant in the morning, so this has puzzled others looking at my numbers.

Yes, it’s often playing a personal blame game, which can often become inordinately exhausting. This trial was really eye opening, as the algorithm gave me a totally different amount of insulin every night. Some nights I needed seven units, and others I needed four, which depended on how much I had eaten, what I had eaten, how much I had or hadn’t exercised, whether I was feeling any anxiety – and the list goes on. The system was also able to vary the timing of the dosing differently across the night based on these factors. The power of this approach was not lost on me – the system took the guesswork out of setting a nighttime basal rate. It made micro-adjustments every five minutes, and there’s no way I could beat it – I was sleeping the whole time. After one day of wearing the system, I was ready to take it home.

But I also started thinking, “What would it look like for the field of diabetes if we had this tomorrow?”

I dream of a day when I will put on a system and it will control my blood glucose automatically, without having to do anything – no more carb counting, no more bolus calculating, no more treating lows. I cannot wait for that day, but we’ll need some significant advances to get there: ultra-fast insulin; CGM that is as good as fingersticks; control algorithms that can deal with exercise, stress, and meals; and perhaps other hormones like glucagon and amylin.

Until that day arrives, I'm really excited about the potential of overnight closed-loop insulin delivery. This system has been undergoing work for a long time – the first meeting on “Obstacles and Opportunities on the Road to an Artificial Pancreas” started the project on December 19, 2005 at the NIH Lister Hill auditorium. Three months later, JDRF announced the first round of funding, and UVA was one of the six centers that first started the JDRF artificial pancreas consortium. The first closed-loop studies began at UVA, Italy, and France in 2008, and after years of in-hospital trials, the first portable DiAs systems were tested in pilot outpatient studies of closed-loop control in 2011.

Since then, the trials have become longer and the algorithms have improved. We’ve learned that the venerable Mayo Clinic and Mount Sinai will also be involved in these trials – this is incredibly exciting, as both of these institutions have the resources to push the research further. Although it’s hard to predict regulatory approval, we believe that the system would need a pivotal trial that would shows the closed-loop system can significantly reduce hypoglycemia and is easy to use compared to a sensor-augmented pump. The biggest hurdle will be establishing a solid wireless connection with the sensor and pump, and the UVA researchers are hoping to achieve appropriate connectivity in the next several months.

I think there’s very little downside to approving this system once we’re sure it can work reliably and accurately, especially when it’s compared to the haphazard approach we currently use to give insulin at night. What’s more, it would address one of my biggest problems about this field: unrealistic expectations. In my experience, overnight closed-loop really worked, and it was better than what I could ever hope to achieve on my own.

Incremental improvement is underrated, particularly in diabetes technology. All of us want the home run product, and we want it right now. But that’s not how things work in the real world. Great products stand on the shoulders of first-gen products that came before. New products always have room for improvement, but they also lay the foundation for future innovations. Importantly, the DiAs system has a “switch” that will be able to flip “on” and do post-meal corrections during the day, with no algorithm alterations necessary!

Overnight closed-loop is just the kind of victory we need in artificial pancreas development. It’s achievable in the short term and something I believe many patients with diabetes can embrace and benefit from. Instead of shooting for the stars and expecting perfection, I’d like to see us move faster, but with smaller pieces, and all with the same goal at the end – closing the loop just like we’ve been saying for the past year. I’m ALL for moving to a hybrid 24/7 closed loop and taking my brain out of the equation during the day. But until that’s ready for primetime, I’ll be happy to wake up at 120 mg/dl every morning. What do you think? Please let us know!

The main question, of course, is when this will be ready for patients. We'll be back with more news in the next issue, but as far as we're concerned - it couldn't come too soon! We want to advocate for this to move forward quickly at the FDA and hope you work with us on this front as that automated insulin delivery at night can become a reality for patients. If you are interested in participating in an artificial pancreas study at UVA, please email [email protected]. You can also email them to ask about other studies in different locations. Thank you so much to all of the fantastic researchers, scientists, and doctors at the UVA trial, especially Dr. Sue Brown and Dr. Boris Kovatchev, who took especially good care of me!

[Editor's Note: This study is supported by NIH grant RO1 DK 085623, at UVA and in Italy. The development of the DiAs system is supported by JDRF and Paul and Dianne Manning, Charlottesville, VA.]