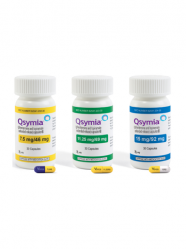 On September 17, Vivus announced that its obesity medication Qsymia (formerly Qnexa) is now available on the US market – this happened at least several weeks earlier than expected. Qsymia is a once-daily pill extended release combination intended to be used with diet and exercise by adults with a body mass index (BMI) greater than 30 kg/m2 or a BMI greater than 27 kg/m2 and a weight-related condition such as type 2 diabetes, high blood pressure, or high cholesterol (see new now next in diaTribe #45). As a reminder, the drug is available in four different doses to give users more flexibility and to ease the transition to the higher doses.

The recommended mid dose of Qsymia will cost approximately $135 per month (about $5 per day), the lower dose will cost $120 per month, the three-quarter dose will be about$163 per month, and the high dose will be about $184 per month (about $6 per day), although these prices may be somewhat higher depending on where the drug is purchased. Since only around 30% of prescriptions for weight-management drugs are paid for by private insurers and Medicare Part D does not cover weight-management medications as yet, it is likely that people who want to use Qsymia will have to pay these costs out of pocket initially. However, Vivus is optimistic that some employers will soon take on at least some of the cost of the drug. The company is also working with private insurers and the government to get Qsymia covered in the future.

Initially, Qsymia will be available through certified mail order pharmacies from Walgreens, CVS, and Kaiser Permanente (for members only), though expansion to other pharmacies is expected soon. Vivus’ ability to get Kaiser on board so early is particularly notable in our view, as it likely signals future potential for coverage by the very influential and cost-focused insurer. And indeed, we believe the Kaiser coverage speaks volumes about what may be available going forward – we suspect large employers over time who really want to help their employees will be covering it. For more information on Qsymia, speak with your healthcare provider or visit www.qsymia.com, and if you work at a company you would like to see cover it, speak with your benefits manager.

This news represents the end of a long and at times difficult road for Qsymia, one that we have spent the last few years covering extensively in diaTribe. For a complete timeline of Qsymia’s journey to approval, see the articles below (as a reminder, Qsymia was previously known as Qnexa). –AW