What’s Next From Tandem? Pump and Closed-Loop Updates from Fall 2018

Control-IQ hybrid closed loop coming in summer 2019; paired app coming soon to the US; plans for the t:sport “patch” pump; and t:slim X2 pump launched outside the US

Last spring, we rounded up the most notable pipeline timing updates from Tandem, featuring Basal-IQ, Control-IQ, and news about the t:slim X2 pump. Read below to see new announcements at Tandem’s recent investor meeting.

Based on readings from the Dexcom G6 continuous glucose monitor (CGM), Control-IQ is an algorithm built into the t:slim X2 pump that automatically adjusts basal insulin; the system is also built to automatically deliver correction boluses to bring down very high blood sugars. This sort of automated insulin delivery decreases lows, improves time-in-range, and reduces some of the hassle of manually managing diabetes – especially overnight. The pivotal trial (study that Tandem will submit to the FDA for approval) started this summer and has completed enrollment. If all goes well, Tandem expects Control-IQ to be available in summer 2019. Notably, as long as current t:slim X2 pump users have the G6, the update will only require installing the new software at home – no new pump needed.

Before Control-IQ comes out, Tandem plans to submit the t:slim X2 as an interoperable/integrated pump (“iPump”) to the US FDA. This means working with the FDA to create a new regulatory path for pumps, which has a major focus on interoperability – i.e., allowing the pump to seamlessly talk to other diabetes devices with Bluetooth. The planned iPump indication should enable Tandem to make changes and improvements to the pump without needing a lengthy FDA process, and it should also enable quick integration of new/improved CGMs. Ultimately, this should allow updates and innovation to reach users faster, as Dexcom and Tandem proved earlier this year with the integrated/interoperable G6 “iCGM” – because of the iCGM pathway, G6 was integrated into Tandem’s Basal-IQ system about a year faster than under the previous framework.

This mobile display smartphone app will connect to the t:slim X2 pump via Bluetooth, allowing users to view pump status and alerts on their own phone without having to pull out the pump. The app will also enable remote monitoring by caregivers and wireless, automatic upload of pump data to t:connect, Tandem’s web-based data application. Based on the pictures, it seems like an Apple iPhone version will be launched first.

The app won’t allow users to control the pump from their phone initially, but this is a strong possibility in future updates – Tandem certainly wants to move in this direction and the FDA seems willing to make it happen, provided the right safety precautions are in place. Other potential future features include integration with diet, sleep, and exercise information, insulin dosing advice, and smartwatch integration.

Update: Launch second half of 2020

Tandem has had the t:sport “patch” pump in development for several years, taking its current pump technology, miniaturizing it, and changing the approach to wear. The pump will have no screen, wireless control from a phone/handheld, and a variety of infusion set options. Users will be able to wear the t:sport pump like a patch directly on the body under clothes (very short infusion set) or in a pocket like a traditional tubed pump (longer infusion set). t:sport will be about half the size of the current t:slim X2, is expected to hold 200 units of insulin, and will include an on-pump bolus button – e.g., a bolus can be taken even if the handheld is out of range. t:sport will integrate the Control-IQ hybrid closed loop algorithm discussed above and receive data from Dexcom CGM, allowing for a truly on-body closed-loop system – i.e., users will remain in automated insulin delivery even when the phone/handheld is out of range. Tandem hopes to launch the pump in 2020. 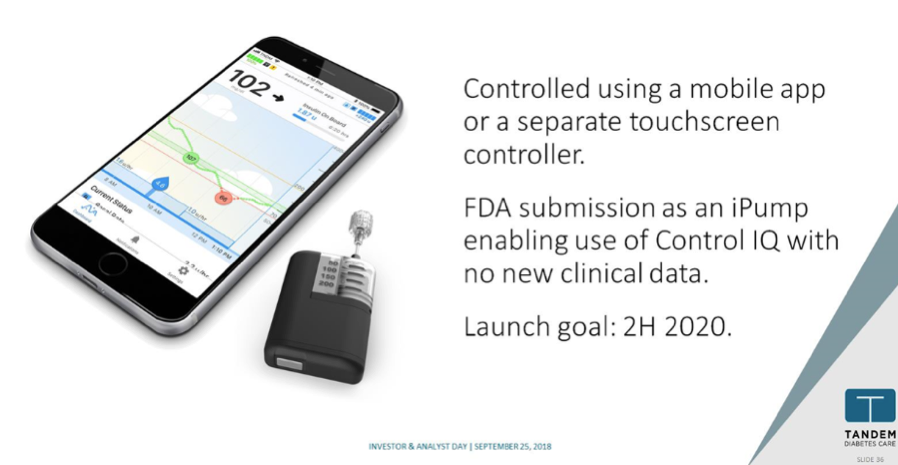 The t:sport next to the current t:slim X2: 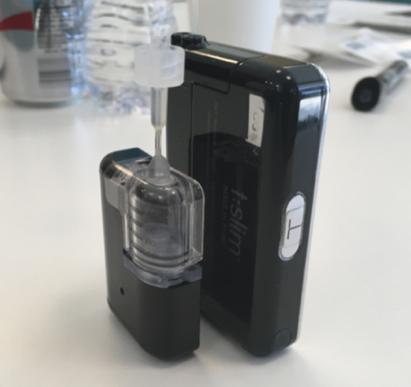 The Basal-IQ PLGS System uses glucose trend information from the G6 CGM to predict (and hopefully prevent) low blood sugar (hypoglycemia). When a potential low is detected, the PLGS algorithm stops basal insulin delivery until blood sugar levels start to come back up; then, Basal-IQ resumes basal insulin delivery. All of this happens without any alarms, and it only adds one additional screen onto the pump. See this article for more details on how the algorithm works, the time-in-range benefits, and how to start using Basal-IQ.

t:slim X2 Pump Launched Outside the US

The next targets for t:slim X2 launch are France, Germany, and the Netherlands, though no specific timing has been given. For now, the t:slim X2 only integrates with the Dexcom G5 CGM, meaning data from the G5 transmitter is sent to the pump screen. Outside the US, launch of the Basal-IQ PLGS system with Dexcom’s G6 is expected to start in early 2019.