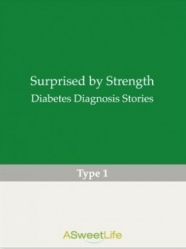 by Jessica Apple, A Sweet Life

I was misdiagnosed with gestational diabetes in two separate pregnancies before I was diagnosed with type 1 diabetes (LADA) while pregnant with my third son. The doctor who diagnosed me was cold. In his tiny office he sat beside a giant poster featuring the female reproductive system, and barely looked up as he read through my test results on his computer. At that moment I needed family and support, not a list of all the terrible things that could happen to me and to my baby if my blood sugar levels were not perfect every second of every day. I needed to know that I was not the only person in the world who had been through a diabetes diagnosis while pregnant. I needed to know that, of all the things that could happen during my pregnancy, one of them was nothing. My baby and I could be just fine.

The stories are collected in two different books (one for type 1, one for type 2) called Surprised by Strength. They can be read by visiting http://asweetlife.org/books/.

Many of the stories in our collection tell the tales of people who beat diabetes against the odds, like Alex O’Meara, who was diagnosed at age 11 with a blood glucose level of 1,010. He coped with his diabetes, from day one, almost entirely on his own. “My parents rarely came to the hospital, so I promised the doctors and nurses that I would be sure to teach my parents everything they had taught me. And I would have, but they never asked.” Another contributor with type 1 diabetes, Michael Aviad, a reserve officer in the Israeli army, was suffering severe symptoms of hunger and thirst when he was called to fight a battle in Bethlehem. “I ate two whole bars of thick Lindt hazelnut milk chocolate as we drove towards our first target,” he writes.

Though the onset of type 2 diabetes is not always as dramatic as type 1, the challenges it brings require changes of lifestyle that are not simple to implement. Michael Plasencia, a third-generation type 2, writes about how difficult, almost impossible, it was for his family to change their traditional Latino diet of rice, beans, and corn tortillas. Moreover, his grandmother with diabetes took offense when Michael did not offer her the sweet items he baked. “Because I gave my grandmother food that was harmful to her, I carried with me tremendous guilt, which she may have known of but never acknowledged,” Michael writes. “I wasn't totally to blame, though – I may have been giving her ‘harmful’ food, but that food that was a large part of my family's diet.”

A second-generation type 2, Ilene Raymond Rush, who was diagnosed while pregnant, says her diabetic father lived in denial of diabetes, “refusing to measure his food or keep to a diet plan.” She has chosen another path. So has Jessiline Anderson, a Native American, who has struggled with obesity since childhood.

What you’ll see in these collections of essays is that, while on the surface it may seem that the writers have little in common, a powerful theme runs through them – the unexpected courage these writers have found to tackle diabetes. For anyone who is afraid or frustrated with diabetes, these stories demonstrate that you can face it head-on, and make the decision to live well with it. Instead of letting diabetes hold you back, you can choose to take a step forward. If you already have a good support system, Surprised by Strength will enrich it. If you’re reaching out, these essays are something worth grasping.