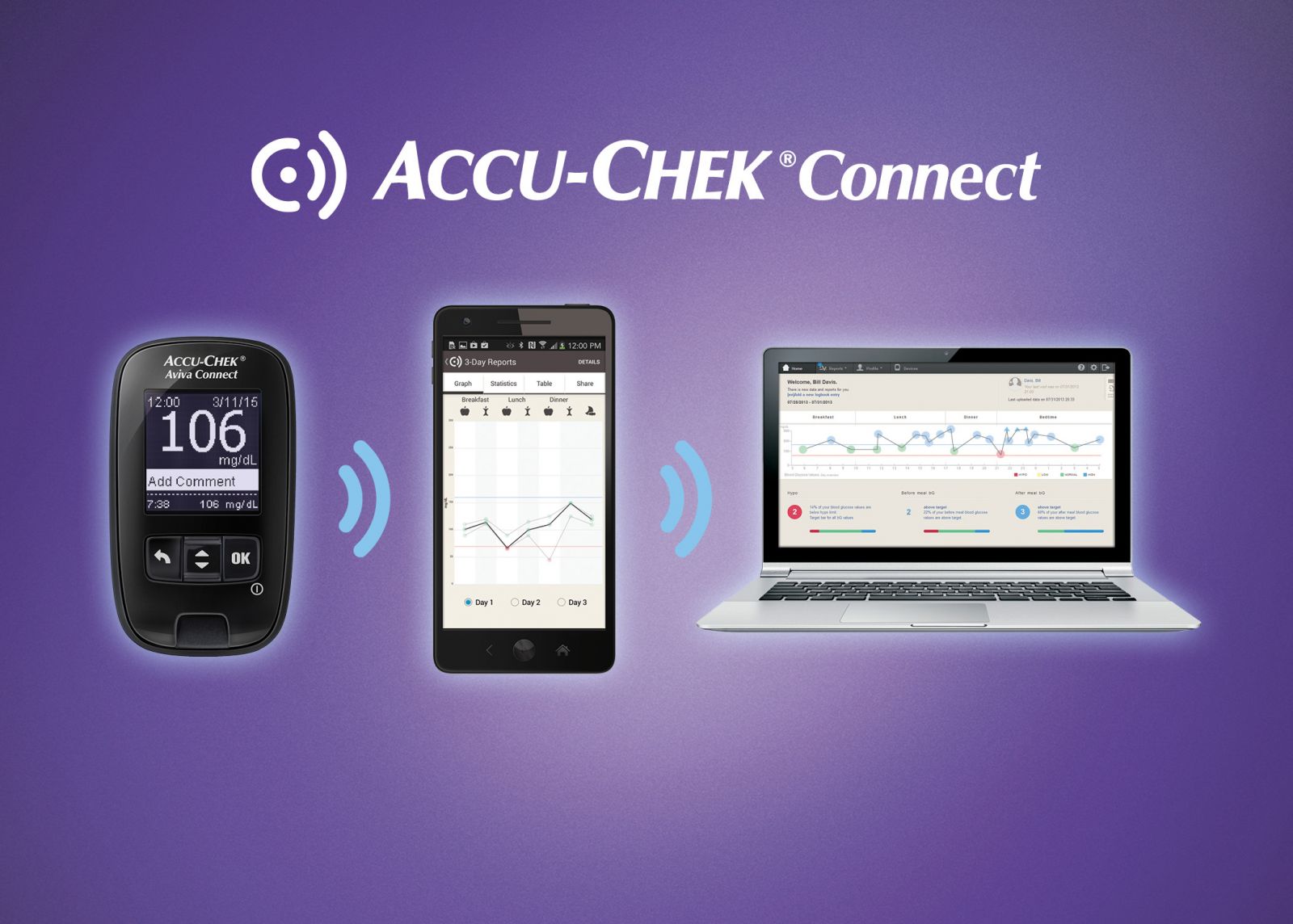 Bolus calculation is a pain – it requires three mathematical operations, often mandating some onerous mental gymnastics to keep it all – target glucose calculations plus carb calculations plus insulin on board – straight (e.g., [156 - 100]/35 + 45/12 - IOB = GOOD LUCK!). Over a decade ago, bolus calculators started appearing in pumps, making it much easier and faster to calculate insulin doses – when these first came out, so many applauded the positives associated with less mental math required. Unfortunately, the majority of patients on multiple daily injections (MDI) have not had it so easy. Aside from the FreeStyle InsuLinx meter in the EU and the recently launched Accu-Chek Aviva Expert meter in the US, there hasn’t been an approved bolus calculator for non-pumpers (there are many unapproved apps, but virtually none of these have not received good reviews).

Enter Roche’s Accu-Chek Connect system, a tremendous win for those on MDI. Roche’s small Connect blood glucose meter ($29.99, available exclusively at Walgreens) pairs with free Android and Apple apps (both!) that include a built-in bolus advisor. After doing a blood sugar test, the result is sent wirelessly (via Bluetooth) to the paired app (~15 seconds). Then, one simply enters the number of planned carbs, and the bolus advisor recommends how much insulin to take – it’s much more accurate than mental math (most mental math anyway!), and provides a nice log of insulin doses alongside glucose values.

We’ve had the chance to test the meter and app over the past couple of weeks, and this article shares our highlights and potential areas for improvement.

Who should consider Accu-Chek Connect? The Roche Connect app revolves around the Bolus Advisor, which requires a special healthcare provider code to setup. Bluetooth pairing the meter with the app and setting up the bolus calculator took us about ten minutes – the app has helpful confirmation screens that guide you through the process, and it passed Adam’s “No Instruction Manual Test Needed” (few devices do!).

In our experience, after performing a glucose test on the meter, you must press at least two buttons to immediately send the value from the meter to the app (up arrow + OK). You can opt to tag the value (“after breakfast”) on the meter or in the bolus advisor. This is well worth the effort, since the app differentiates pretty well between them and there are some valuable “connect-the-dots” moments to have.

Accu-Chek Connect really shines when the app is actively open on your phone’s screen – that results in the fastest transfer and the quickest bolus calculation. We found it takes ~15 seconds  to transfer the meter value to the actively open app, at which point you can enter the bolus advisor and calculate a bolus. The bolus advisor has just one-screen for entry and then a second screen to review the bolus calculation. It’s as simple as you would want it, though Roche has thrown in two valuable additions: (i) the ability to add meal pictures to each entry, which help add very useful context to a bolus – we love this and it’s a great example of a feature that makes us more engaged; and (ii) a drop down that allows you to pick different customized exercise adjustments to the bolus (e.g., Walking, -20%) – this one’s also very helpful as it makes us feel we can personalize our diabetes management more than if we were doing everything in our heads.

The final review screen does a great job of showing the calculation in graphical form and the final total, which accounts for correcting the blood sugar, carb intake, and insulin-on-board.

How long does it take for a fingerstick, BG transfer to the app, and completed dose calculation? In total, taking a fingerstick, sending the BG value to the app, and running the bolus advisor takes between 30 and 60 seconds. Not bad! The low-end of the range reflects only inputting carbs in the bolus advisor, while the high end reflects adding a picture and tagging the entry. We were all particularly impressed with the speed, given how much we dislike typing things into apps.

What do we like the most about Accu-Chek Connect?

How Can Accu-Chek Connect Improve?

It is very good to see another connected meter available, and especially one that includes a bolus advisor app. Diabetes is such a numbers game, and when it comes to dosing a drug as dangerous as insulin, patients need better tools. Accu-Chek Connect is a nice addition, and we look forward to seeing more meters get connected to apps that give patients more useful, actionable data.