twitter summary: Animas Vibe brings Dexcom CGM onto the pump screen, eliminating the need to carry a receiver. Plus, a guide to choosing a new pump.

The Animas Vibe insulin pump will begin shipping in the US this month following FDA approval on November 25. The pump can talk directly to the Dexcom G4 Platinum transmitter, bringing CGM data right onto the Vibe’s screen and eliminating the need for a separate Dexcom CGM receiver (though one can still be used, if desired; see below). The advance represents improved convenience – combined viewing of CGM and insulin data allows for better real-time decision-making, as well as more comprehensive downloads. The Vibe is the first pump on the market to integrate Dexcom CGM, and it has received good reviews since it first became available in Europe in 2011. Aside from integrating the Dexcom and a few changes to the user interface, the Animas Vibe is largely identical in look, feel, and design to its predecessor, the OneTouch Ping (available since 2008). 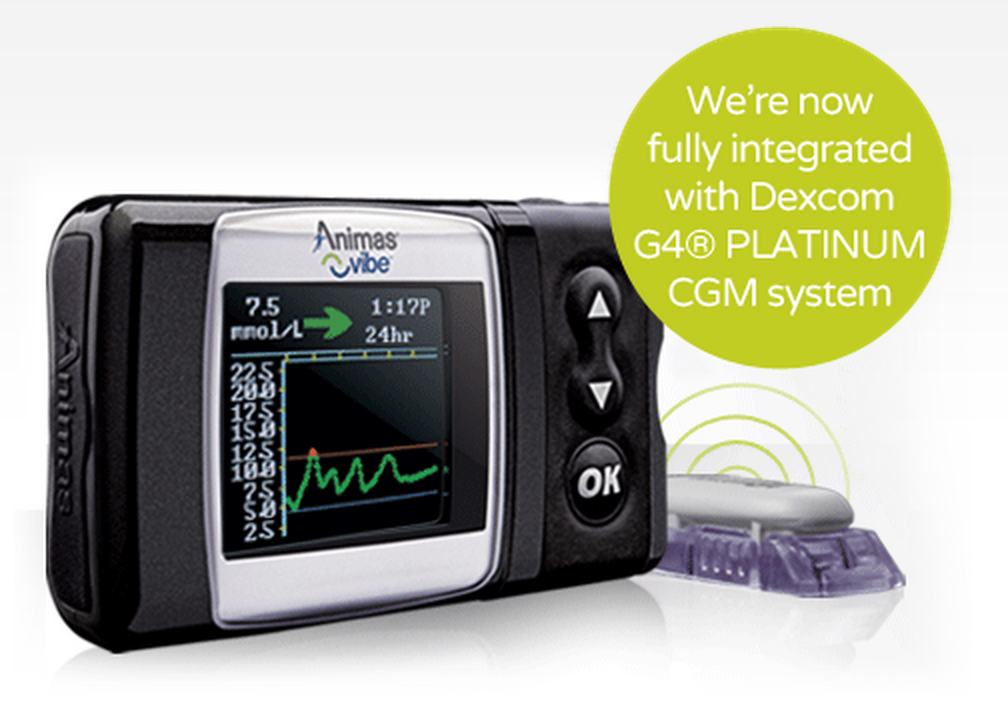 The Animas Vibe brings the software from the Dexcom G4 Platinum receiver right into the pump. In general, that means a similar user experience to using Dexcom’s G4 Platinum receiver (released in October 2012), but without the need to carry the separate device around. I was impressed with the simple setup to get Dexcom data on the Vibe, which only required typing in the transmitter serial number (the same process as on the Dexcom receiver). From there, the Vibe works the same as Dexcom receiver, including a two-hour warm-up, calibration entry, and CGM trend screens (one-hour, three-hour, six-hour, 12-hour, 24-hour).

By far the most useful screen on the Animas Vibe is shown to the right – it simply shows the CGM value, the trend arrow, and insulin-on-board. I found this to be an immensely useful snapshot of my diabetes at a single point in time, and incredibly valuable for avoiding hypoglycemia. One of the best parts of CGM is the addition of a trend arrow to single blood glucose points, which add contextual information to improve decision-making. The Vibe brings insulin-on-board information side-by-side with CGM trends, adding yet more useful context to the CGM data alone. Importantly, this screen can be accessed by a single push of the top button on the Vibe (the “lock” button on the OneTouch Ping), enabling quick, pull-it-out-of-the-pocket checks of what’s going on.

There are still some scenarios where I find the standalone Dexcom G4 Platinum receiver to be valuable (e.g., riding my bike, where my pump is tucked away), and I was glad to see that it can still be used along with the CGM-integrated Vibe. The downside is that you must independently calibrate and interact with the Animas Vibe pump and the Dexcom receiver, since they function as standalone devices (i.e., each device contains the software “brains” of the CGM, which interpret the raw signal coming from the transmitter). Still, the hassle is worth it for those who want the convenience of the Vibe and the flexibility of the standalone receiver.

Though Animas did a very good job of leveraging the existing OneTouch Ping platform, the pump does have its limitations. The trend-graph screens are harder to read and take longer to load than on the G4 Platinum receiver – for people who aren’t that patient, or just who get sick of their diabetes (diabetes burnout, etc.) that is a hassle! In many cases, the interface on the Vibe also requires considerably more button pushing than on the Dexcom receiver. If the screen is asleep, you can get to the CGM screens with one button push (the lock button), just like the Dexcom receiver. But if you are on the pump home screen, it takes five button-pushes to get to the trend graphs. That seems like too many to be called simple – and we know that simple is the magic word in diabetes. As I expected, the alarms and vibration on the Vibe are also not as loud or fervent as those on the G4 Platinum – that’s also unfortunate since we’d love it to be more rather than less customizable.

As well, the Animas Vibe cannot upgrade to the recently released “G4AP algorithm,” which improves the accuracy of the Dexcom G4 Platinum CGM through an online software update. That’s understandable since it wasn’t submitted to FDA that way, but it’s a shame, since if we can get our CGM to be more accurate – that’s really valuable as an idea conceptually and in reality. In addition, the Vibe will not be compatible with Dexcom’s Gen 5 mobile system, enabling CGM data to be sent straight from the transmitter to a smartphone. FDA submission of Gen 5 is expected by March, meaning approval could come in late 2015 or early 2016. Once Gen 5 launches, Dexcom will produce two transmitters, one for patients who prefer CGM data on their pump (the Animas Vibe or yet-to-be approved Tandem t:slim G4), and another for those who prefer the flexibility of smartphone compatibility. At that point, the Vibe will become a bit obsolete, though we hope that it’s busy getting prepared for this change too.

Menu Improvements from the OneTouch Ping

Aside from adding CGM data, the Vibe is almost identical to its predecessor, the OneTouch Ping, including the pump’s look and feel, size, and menu structure. However, Animas has made some minor improvement in the pump’s navigation, including:

It’s terrific to see these changes, and I believe the Vibe still has a lot more potential to improve upon the OneTouch Ping’s menu design. Aside from the Roche pump, I find the Animas to be the hardest to use from an interaction standpoint, especially the amount of button pushing required to perform tasks. Of course, keeping the pump largely the same makes the FDA submission and manufacturing easier, and I hope a future Animas pump reexamines the Vibe’s user experience.

For current Animas OneTouch Ping users, there will be a $99 “ezAccess Upgrade Program” to get the Vibe System - more details are posted here. To be eligible, you must have a OneTouch Ping Insulin Pump that is still in warranty and was purchased before December 1, 2014. For new users, the Animas Vibe insulin pump has a retail price of $7,150, though it will be covered by insurance like other pumps – Animas can tell you what you will pay based on your plan. While currently only approved for adults, Animas plans to soon submit a supplemental request to the FDA for approval in pediatrics. We hope they do this after making some of the improvements that we and other awesome bloggers have suggested. See other valuable reviews here from Kerri Sparling, Manny Hernandez, Mike Hoskins from Diabetes Mine, and Melissa Lee at A Sweet Life.

Appendix: Major Factors to Consider When Choosing An Insulin Pump

It’s great to see the Animas Vibe entering the US market, as it signals another valuable option for patients. However, the launch also brings a conundrum: what pump to choose? There is NO perfect pump, since all devices have benefits and drawbacks depending on your preferences. The table below summarizes my experiences with each of the pumps available in the US; the links will take you to the diaTribe test drive.