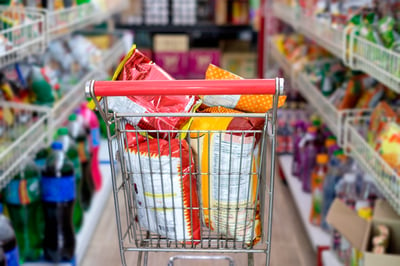 By Emma Ryan and Annie Chen

There remains debate over which diet is “best” for weight loss and maintenance, but one thing nearly everyone agrees on is to decrease intake of “ultra-processed” foods. Ultra-processed foods typically include at least five ingredients, concentrated doses of sugar and refined carbohydrates, and long shelf lives (i.e., they don’t spoil quickly). Processed foods often include substances not found in home-cooked meals like dyes, artificial flavors, non-sugar sweeteners, and preservatives. See examples of processed and unprocessed foods at the end of the article!

The study examined 20 adults who alternately ate an ultra-processed diet and an unprocessed diet for two weeks at a time. The two diets included meals that presented the same number of calories, energy density (number of calories per gram of food), macronutrients (e.g. fat, protein, carbohydrate), and total sugar, sodium, and fiber. However, due to the nature of ultra-processed foods, this diet had substantially more added sugar (i.e., extra sugar put in by the manufacturer) and saturated fat. Participants could eat as much or as little as they wanted.

This carefully designed study suggests that limiting – and ideally avoiding – processed foods may be an effective strategy for weight loss and maintenance. In fact, the American Diabetes Association’s (ADA) recent Nutrition Guidelines emphasized that limiting processed foods is a key recommendation among all effective nutrition choices.

See examples of processed and unprocessed foods below and several photos of the meals in the study in this article. Michael Pollan’s fantastic, short book, Food Rules, has a number of memorable quotes about processed foods: