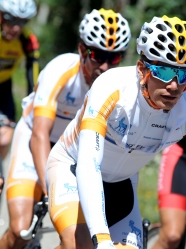 “You can do anything with diabetes. This is living proof.”

Today, we had the privilege of following all type 1 professional cycling Team Novo Nordisk (TNN) on Stage 4 of the USA Pro challenge, a grueling 126-mile ride at serious altitude (at peak, over 12,000 feet) from Aspen to Breckenridge, Colorado. The race covers a total of 865 miles over seven days this week.

diaTribe was incredibly lucky to get an up close view right from the TNN support car – boy were we buckled in tight amidst radio crackling, water bottles passing out the window, and weaving inches between riders and support cars down windy mountain roads at over 50 mph! It was exhilarating, and also a very clear reminder of what this all-diabetes professional cycling team is taking on. This is the big leagues, that's for sure!

If you look at the overall standings, Team Novo Nordisk is not having its best race – the four riders are in 72nd, 80th, 97th, and 99th out of a field of 108 riders. However, the differences in cycling are miniscule over the great distances covered. To put it into perspective, the race leader has ridden a total of 439 miles since Monday in a cumulative 17 hours and 24 minutes; the four TNN riders with type 1 diabetes have done it in just over 18 hours. With just a few more years of experience, we can't wait to see where they're going to be! There is also more to the story than meets the eye. The Team Novo Nordisk riders came straight from the Tour of Denmark last week (at sea level) and didn't have the usual three weeks needed to acclimate to Colorado’s incredibly challenging altitude as some of the other teams did. Plus, crashes and injuries have reduced TNN to just four riders for the US Pro Challenge, rather than the usual eight. That matters a lot from a team performance perspective.

Still, the team is incredibly loyal to this race, given the diabetes connection – the renowned and admired Mr. Shawn Hunter, CEO of the US Pro Challenge, has two kids with type 1 diabetes, one diagnosed just days before the race started last year. TNN has long been an inspiration to his family, and consequently, has raced here for every year since the race has been around (the last four!). Mr. Hunter expressed sincere admiration for Team Novo Nordisk CEO Phil Southerland and the riders – “Yeah, this is not done in any other professional sport – not even close. This is like having the New York Yankees, where the top eight players all have type 1 diabetes!” He put into context for us very well Team Novo Nordisk’s ascent: “They were placing over 100 of all teams a year ago – this year, their improvement has been amazing!” (See below for more on this.) 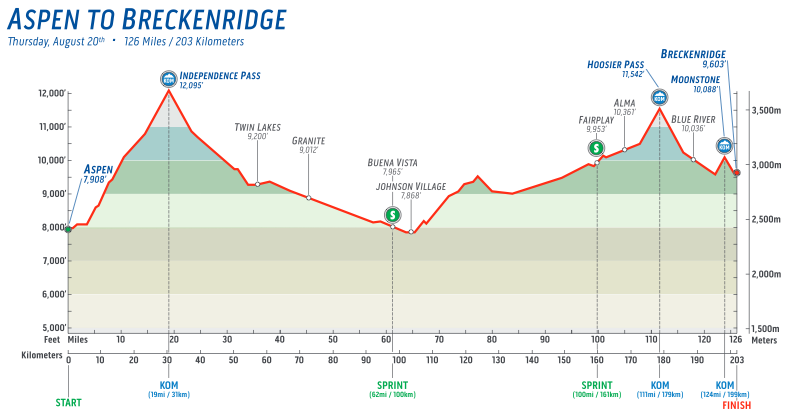 For those who don’t follow cycling, it is worth appreciating the gravity of what TNN is doing. Let's try to make that happen!

Over today's 126-mile route, riders averaged 24 miles per hour and climbed a total distance of 10,125 feet. To put those numbers into perspective, imagine:

TNN riders all wear Dexcom CGM, aiming to stay in the zone of 120-180 mg/dl during the race. Glucose levels that run much lower or higher sap energy (or on the low side can be dangerous, of course), which is not an option in professional cycling. Riders eat approximately 40-60 g of carbs per hour, though this varies dramatically – a rider might go two hours without any carbs, while a 30-minute stretch might include over 100 g of carbs. On the bike, riders consume energy bars and gels (the team car was stocked with Clif bars today), water, electrolyte drinks (Nuun is TNN’s brand of choice), and regular Coca-Cola. We imagine Dexcom CGM has probably been very important to their improvement, compared to years back when they would have to hold out their hands to test their blood sugar with someone from the team car during a race!

TNN has improved markedly over the past year – the team ended 2014 ranked 122 in the world of professional cycling. Their ranking is now in the 80s, and their peak ranking this year has been in the 60s! The team has already registered 26 top 10s this year, a marked rise from 21 for all of 2014 – that’s at barely halfway through the year.

The clearly stated and inspiring goal is to race in the Tour de France, the world’s most prestigious cycling race, by 2021 (the 100th anniversary of the discovery of insulin). To make that happen, TNN will need to crack the top 25 cycling teams in the world. Doable? Team CEO Phil Southerland told us today that things are on track, and the bold hope is to do either the Giro d’Italia or the Vuelta a Espana (the two other Grand Tour races) by 2018. Notably, Mr. Hunter also thinks it’s more than possible – “…it’ll happen!” But not without a lot of work on multiple fronts.

Achieving these goals will require harder races, faster riders, and continuing to recruit – and recruit harder! –  the most talented cyclists with type 1 diabetes. Notably, TNN has started a development team and junior team to grow the most promising athletes with diabetes. And boy do these sound incredibly competitive!

Specifically, the junior team includes 17-18 year old type 1 cyclists from nearly 20 countries. Once these athletes get enough experience, they progress to the development team, and eventually, the pro team. Unlike other pro teams, Novo Nordisk doesn’t have the luxury of picking from the general population of great cyclists; they must find great cyclists with type 1 diabetes. To make that happen, TNN holds a talent ID camp in Athens, Georgia to identify promising type 1 athletes for the junior team. This year, 48 young athletes (15-18 years old) came from 18 countries all over the world, all in the hopes of one day racing with the world’s best. Today’s race and our interview with Phil made it clear that the company Novo Nordisk has invested enormously in the team and that it is succeeding on all fronts. Given Novo Nordisk’s Triple Bottom Line approach to its work – meaning that a healthy economy, environment, and society are key to long-term business success – we firmly believe that the partnership between the team and the company has never been stronger. This also means that employees and management have a stake in the team doing well and getting to its ultimate goal, the Tour de France. We can see that coming and believe incredibly that it can happen. Team Novo Nordisk is being run like a machine (of the best kind!) from the inside, with its Talent ID Camps, Junior Team, Development Team, and full riding team – the kind of organization it takes to make so many teams truly sing is really an inspiration to watch. 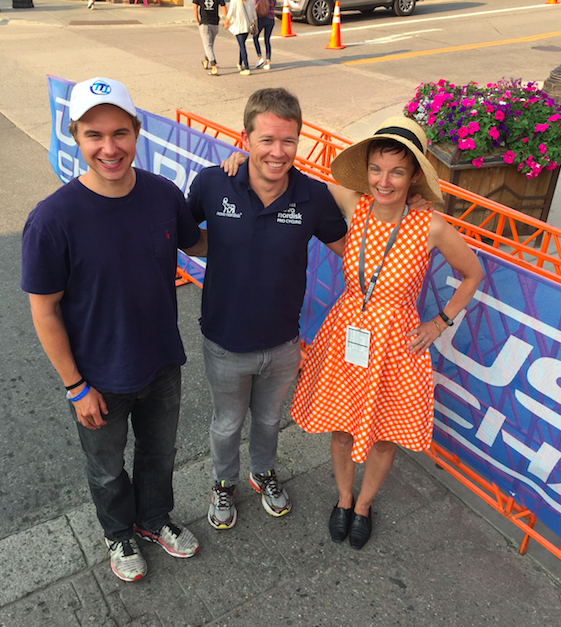 We also believe CEO Phil Southerland is a remarkable inspiration – he connects instantly with everyone, is strategic, smart as a whip, asks for what he wants (like nobody’s business), is so engaging and persuasive, understands business and sports so well, and wants to reach the ultimate goal so badly. We are so impressed with his vision and how it aligns so well with Novo Nordisk’s. Watching the branding of the team and of the company today made us so happy about all the awareness this is bringing to diabetes.

Kudos to Phil, his partner Dr. Biljana, the riders at every level, and all the fans for making this such an inspirational story.