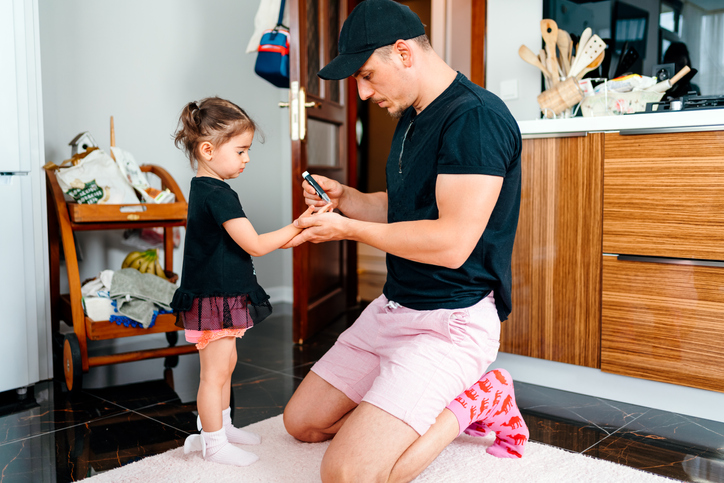 Having to consider your child’s diabetes management on top of your own self-care can be a huge challenge to maintaining good mental health. Here are some tips from parents on how to cope with these daily stressors.

Trevor Dulude, a 7-year old boy from East Hampton, MA, gleams with pride as he points to an American flag sticker decorating his glucose monitor.

Trevor is a happy child who has had type 1 diabetes since he was 5. Lucky for him, he has had a “dia-bestie,” his mother, Erica Dulude, who has lived with T1D since she was eight.

The tenacious twosome, who wear matching medical alert bracelets handmade by Trevor’s uncle, say that being “dia-besties” is one of their keys to handling the daily stress of diabetes.

“Once I had kids, it’s like diabetes became my third child. It’s nonstop,” Dulude says. “I’ve been double arrows down [on my CGM glucose trend] and had to look at the boys and tell them ‘mommy doesn’t feel well, I need a minute.’ But it’s ok to express the burden of diabetes to your child, because then they can feel like they know what is going on. I use the words a lot, ‘diabetes sucks’ and then I say, but we have technology to help us and we’re not the only ones. That’s huge.”

In addition to Trevor, Dulude has an adult “dia-bestie” she vents to twice a week. Conversations vary, and sometimes include husbands snoozing through alarms, children tearing off pumps, and asking the question, why me?

Even with these coping strategies, the continuous pressure of both parenting and diabetes management can cause enormous stress. According to the Center for Disease Control and Prevention (CDC), people with diabetes are two to three times more likely to have depression than people without diabetes. Adults and children with diabetes also tend to have elevated rates of anxiety symptoms and conditions including generalized anxiety disorder (GAD). In addition, many people living with T1D exhibit diabetes distress – a condition where the emotional toll of living with diabetes manifests in physical ways such as fatigue, panic, or burnout.

Growing up, Dulude was raised by a stay-at-home Mom and former EMT with a sense of humor, both of whom were undeterred by diabetes.

“Their outlook had a big impact on me. I was raised to know it could always be worse and to focus on what good today brings,” she says.

To help manage her mental health, Dulude sees a therapist and takes anxiety medication if she needs to. She also has another approach; for the past 19 years, she’s worked as a cake decorator. She laughs at the irony of “playing with sugar all day long” but calls it her therapy out of the house. She explains that she is lucky to have a job that makes other people smile, because seeing her customer’s joy also brings her happiness.

Although Dulude is well-prepared for T1D emergencies, she’s only human. She makes mistakes like the rest of us. Once, she accidentally treated Trevor for a low instead of herself even though they both have CGMs with different alarm tones. Instead of panicking, she laughed. It’s that quick-witted sense of humor she inherited from her parents.

“I know I’m ok [with] doing this for the rest of my life. I’ve made it this far, so I know my son can too,” Dulude says with a smile.

Dulude's mindset combined with her ability to evaluate inevitable mistakes and correct them, when possible, helps ease the burden of diabetes. For other parents, thinking about their children’s mental health, as well as their own, lessens the mental toll of the condition.

Becca Morra lives in Ohio and is the mother of three children. One of her children, as well as Becca herself, both have T1D. She previously published a blog post for the Cincinnati Children’s Hospital Medical Center in 2018, which focused on mental health and key tips for children and parents with T1D.

Morra explained that chronic illnesses like diabetes can easily present mental and emotional challenges. “My experience, however, has also taught me that parents and patients can make healthy choices to lessen these burdens,” she said. “The mental and emotional effects of the disease can take a toll on children, which is why it’s important to pay attention to your child’s mental health. If she is not well from an emotional point of view, she will likely have more difficulty managing her diabetes, if not now, in the future.”

Katie Harbuziuk lives in Alexandria, Virginia, and has been living with T1D since she was 11. Her son Andrew, 4, was diagnosed three years ago.

“The first few months felt like every waking moment of life was consumed with diabetes thoughts, either with myself or my son,” Harbuziuk recalled. “I felt a soul-crushing feeling of immense guilt when he was diagnosed, but with time, those feelings have passed and today, it is what it is.”

Harbiziuk credits her son’s positive attitude for helping them both live a “normal life plus diabetes.”  She often reminds herself how lucky she is that her husband is in the Navy, which covers the cost of all her family’s medical expenses.

“I have acquaintances in T1D groups with children who have T1D, and the financial burden is overwhelmingly stressful," she said. "I’m very thankful we get excellent health insurance. It takes a big load off."

Morra said that it’s important to remind your children that this condition is difficult even for adults who have lived with it for decades. She urges families to notice and recognize the hard work it takes to stay in a safe blood glucose range. Morra recommends asking from time to time if a child who has T1D needs a break from managing the disease. Most importantly, she says, children learn from parents. She urges parents with T1D to do everything they can to manage their own stress levels, so that their emotions don’t spill into interactions with their little ones.

Joanna Smiley
Joanna Smiley is an award-winning journalist with over 15 years of experience writing for newspapers, nonprofits and for profit corporations. She is also a mom to an 8-year-old warrior living... Read the full bio »