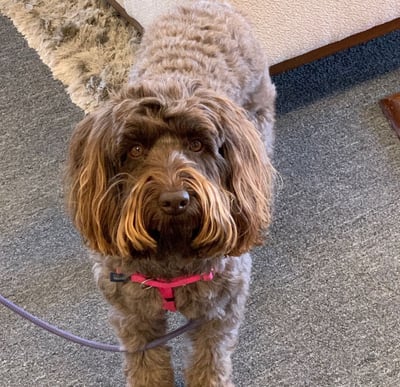 The cast of characters:

Charley – a 70-year-old man with long-standing type 2 diabetes (T2D) who is the dog “pied-piper” of Portsmouth, NH.

Gilli – a 4-and-a-half-year-old friendly female Labradoodle who has visited Charley nearly every morning for the last two years.

Alan – Gilli’s co-owner and a diabetologist with many years of clinical experience who is responsible for Gilli’s morning walk.

Portsmouth, New Hampshire, a small city along the very short coastline of the state, is well known for its physical beauty and the friendliness of its people. Portsmouth is known as a dog-friendly town.

Every morning between 7 a.m. and 7:30 a.m., my wife, Liz, and I take Gilli on a walk through town.  And each morning, some 200 yards into that walk, we meet Charley, who is sitting on his bench in front of the Federal building beside a cooler in the summer and a duffle bag in the winter filled with different treats to ensure every dog has what they like (all food allergies are accounted for!). It is important to understand that stopping at Charley for a conversation and a piece of cheese for the dog is almost compulsory and draws many dogs and owners each morning.

Charley first came into our lives about two years ago. Since then, we have developed a warm relationship. When Charley asked me what I did for a living, I told him that I was a physician. He probed further, and I relayed that I was a diabetologist, formerly of the Joslin Diabetes Center and then an executive at Novo Nordisk. He then revealed his experience with T2D and the many complications he had suffered. His initial history with T2D was not unusual although it was unfortunate. About 20 years ago, Charley had about two years of symptoms before receiving a diagnosis of out-of-control diabetes with an A1C of more than 10%.

He had obesity, fatigue, increased thirst, and frequent urination. Initial attempts to reduce his glucose were unsuccessful. He didn’t tolerate several oral medications. During the last 10 years he has had a bad reaction to SGLT-2 inhibitors and couldn’t take GLP-1 receptor agonists because of contraindications. He had been treated with metformin and then was placed on insulin until he gradually had his treatment intensified to multiple daily injections consisting of long-acting insulin before bed and rapid-acting insulin before meals.

Charley lives alone and initially had difficulty following a diet. After suffering two strokes, rather than be incapacitated, he began a walking program, learned all he could about diabetes and initiated a rigorous self-management program. Charley began to improve; his blood glucose levels came down, and he recognized that he could control his diabetes and his life.

As anyone on multiple daily injections knows, treatment is complicated; the risks of low blood glucose are very real, and activities of daily living require thought and care.  Monitoring blood glucose is key. Knowledge is power, and that is best demonstrated by knowing and understanding what your glucose value is throughout the day.

Charley was fortunate that his diabetes educator suggested that he begin using a continuous glucose monitor to guide him through his day. It was a revelation! Suddenly, Charley was not only aware of what his glucose was at the moment he looked at his monitor, but he also knew what direction his glucose was headed.

Understanding his glucose values reinforced the changes he was making to his diet and helped him with his activities. He rose at 3 a.m. and began to walk the streets of Portsmouth to get 10,000 steps before 7 a.m. He began to avoid carbohydrates and focused on a protein-rich diet. His weight came down slowly but steadily, and after two years, he is now close to an ideal body weight after losing nearly 50 pounds.

Most importantly, he has been able to self-adjust his insulin to the point that on most days he requires no rapid-acting insulin and has even experimented with omitting his long-acting insulin occasionally. Did diabetes control his life? No, he decided to control his diabetes by changing his lifestyle in ways that he identified as doable and comfortable.

And his mental state improved as he saw and understood the slow but steady progress in his diabetes control.

However, there was one more unexpected turn in Charley’s journey. As time went on, I noticed that while largely relying on his continuous glucose sensor, Charley continued to check his fingerstick blood glucose multiple times a day. He needed assurance that his CGM was providing accurate data and became concerned when the two values differed by 20 or 30 mg/dL.

Indeed, I realized that Charley was performing 5-8 finger sticks a day and rarely had values that differed by more than 20 mg/dL. Once again, diabetes was controlling his behavior and emotional state.

I explained that the CGM likely was as accurate as the fingerstick glucose values, especially when taking into account technique, timing, and other considerations.  We looked at the time in range (TIR) function on his monitor, and I noticed that his blood sugars were more than 90% of the time within the recommended range of 70-180 mg/dL and were rarely above 140. He had very few values below 80.

The importance of time in range hadn’t been discussed with Charley when he learned how to use CGM. Since these discussions, Charley has markedly decreased the number of fingerstick measurements and has felt more comfortable working with the values that his CGM provides. He has begun to rely on the CGM technology without overthinking it or letting CGM, a tool to make diabetes self-management easier and more reliable, become a source of concern or doubt. The success of this new understanding is validated by his most recent A1C of 5.7%!

So, what are the lessons from my interactions with Charley?

Charley, Gilli, Liz, and I continue to meet on a daily basis. Gilli gets her piece of cheese (now up to two pieces), and I continue to learn more about diabetes from someone who has learned to control it with knowledge, technology, and determination.

AM
Alan Moses
Dr. Alan Moses was trained in internal medicine and endocrinology, spending the major part of his academic career at Harvard doing bench and clinical research and clinical care and rising... Read the full bio »

The FDA cleared Mallya, a new smart medical device for disposable injector pens. This allows users of both insulin and GLP-1 receptor agonist pens to connect the...