Closed Loop Technology is a Success in Kids 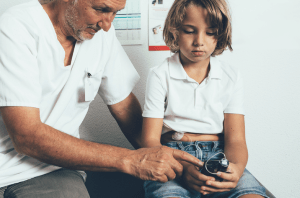 In a study of children younger than seven, automated insulin delivery (AID) led to greater Time in Range, less Time above Range, and lower A1C levels.

A recent study in the New England Journal of Medicine showed that children as young as two years old can show significant benefits from using closed-loop automated insulin delivery (AID).

74 children, ranging from two to seven years old (the average age was five and a half), with type 1 diabetes were included in the trial. Each of the children was already using an insulin pump at the start of the trial, and most of them were using a continuous glucose monitor (CGM).

The closed loop system consisted of a Dana RS insulin pump, a Dexcom G6 CGM, an android smartphone with the CamAPS FXapp (this is the closed-loop AID algorithm), and a system to upload children’s data to the cloud.

The results showed that the AID system not only helped improve glucose levels for the participants, but it did so without significantly increasing Time below Range (TBR). Participants spent on average two more hours in range each day, and they were spending about 95% of their time in closed-loop mode.

In addition, the AID system was particularly effective at night, allowing participants to spend almost four extra hours in range than the control group. Given that poor sleep quality is a major challenge for children with type 1 and their families, this technology could help address this problem in particular, improving these families’ quality of life.

Results from the 16 Week Periods

There were very few adverse events during the trial. Only one instance of severe hypoglycemia was reported during the closed-loop period when the child was using the AID system.

Overall, this study shows that in very young children, AID technology can improve glucose levels and be a safe way to reduce some of the burdens that come with daily diabetes management.

For more information about AID technology, check out our resources on the topic here.