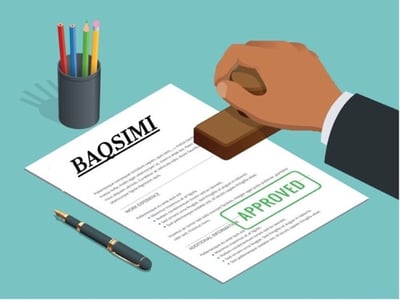 Lilly’s Baqsimi is a needle-free, simple treatment for severe hypoglycemia – bringing long-needed innovation to use of glucagon in emergency settings. Expected in pharmacies within one month

The FDA has approved Baqsimi, a nasally administered glucagon, for the treatment of severe hypoglycemia in people with diabetes four years and older. Baqsimi is administered like a nasal spray and comes in a single-use dispenser that requires just 3 steps to use: (i) remove the device from tube; (ii) insert tip of device into one nostril; (iii) push plunger all the way in to administer dose. Notably, it does not require inhalation, meaning that it can be successfully administered by another person if the receiver is unconscious. 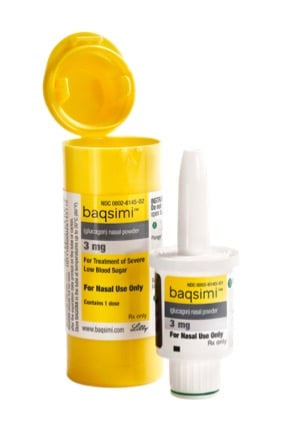 Baqsimi is the first FDA approved glucagon of its kind – it is needle-free and comes ready-to-use, requiring no mixing or preparation. This is a radical improvement over current glucagon kits, which are very difficult to use in an emergency and often require training – a caregiver must successfully mix a powder and liquid and inject the person experiencing severe hypoglycemia.

In a small study, the difference in user experience was striking. Comparing nasal glucagon to the cumbersome injection kit:

Baqsimi is expected to be available in US retail pharmacies within one month. It can be stored at room temperature and stays stable for 18 months to two years. Baqsimi will be priced the same as current glucagon injection kits, for which most people have a copay. Lilly will offer a prescription savings card that can reduce costs of Baqsimi to $25 for up to two Baqsimi devices. For those paying cash, Baqsimi will be $280.80 per device (one dose).

Eli Lilly has also submitted the nasal glucagon to the EMA for approval in Europe; a decision is expected soon. The FDA’s approval of Baqsimi is a major win for the diabetes community and represents a significant step forward for treating severe hypoglycemia.

Here are Expert Views about FDA Approval of Baqsimi:

“For kids with diabetes, nearly 1/3rd of the day is in school. Now, bus drivers, teachers, and coaches will feel more confident that they can assist a student with a severe hypoglycemic event.” – Yale’s Dr. Jennifer Sherr

“I’ve had type 1 diabetes for 32 years, and glucagon has always loomed as a frightening needle to be used in a frightening circumstance. The approval of nasal glucagon makes the concept of severe lows a little less overwhelming, because my family won’t be as intimidated by the treatment mechanism. My nine year old daughter will actually be able to help me in an emergency, increasing my safety net of well-being and confidence.” – creator and author of Six Until Me and diaTribe contributor, Kerri Sparling

“Until now, complex glucagon injections that take several steps to administer were the only available treatment for people experiencing a severe hypoglycemic episode. Administering nasal glucagon is a much less invasive and simplified process that can save critical moments during an emergency, particularly if an individual loses consciousness.” – JDRF President and CEO Dr. Aaron J. Kowalski

“Baqsimi is a landmark, desperately-needed approval and a wonderful example of game-changing innovation focused on user experience. In emergency scenarios, user experience is everything; finally, we have something people can use without having to decode an instruction manual.” – diaTribe’s Adam Brown

“The only currently available glucagon must beinjected and requires 7 nerve-wracking steps to use. Nasal glucagon is much simpler which will be very much appreciated by patients.” – Dr. Charlie Alexander, New Jersey

What is Severe Hypoglycemia?

Severe hypoglycemia occurs when a person’s blood glucose levels are too low and they cannot treat the episode. In an emergency hypoglycemic situation (when someone is unresponsive, having a seizure, or in a coma), glucagon can be administered to quickly raise blood glucose levels. Glucagon, a hormone made by the pancreas, increases blood sugar levels by telling the body to release sugar stored in the liver into the bloodstream. People with diabetes who are on insulin or glucose-lowering medications like sulfonylureas are at the greatest risk of severe hypoglycemia.

Kara Miecznikowski
Kara joined diaTribe as a Summer Associate in May 2019 as a rising senior at the University of Notre Dame, where she studied biological sciences and journalism. At Notre Dame,... Read the full bio »
AC
Albert Cai
Albert Cai joined Close Concerns as a Summer Associate in 2018 and returned as a Full-Time Associate in 2019. He graduated from the University of Michigan in May 2019 with... Read the full bio »