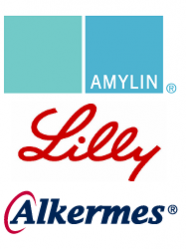 Amylin Pharmaceuticals and Eli Lilly, the makers of Byetta, the first ever GLP-1 agonist, have teamed up again to develop a brand new GLP-1 agonist, which they have named Bydureon. While the active ingredient, exenatide, is the same in both Bydureon and Byetta, with Bydureon, it is placed inside microcapsules that degrade slowly within the body. This allows the exenatide to remain active in the body for a much longer period of time. In fact, Bydureon remains in the body so long that injections are only needed once per week, which some patients will really appreciate. By comparison, Byetta injections are taken twice a day, and with Victoza (another drug in the same class), injections are taken once a day. However, the Bydureon needle is bigger. Bydureon is also effective. In a head-to-head study of Bydureon and Byetta called DURATION-1, Bydureon provided individuals with type 2 diabetes greater reductions in A1c, greater reductions in total cholesterol, much lower rates of nausea and vomiting (a few of the more common side effects with GLP-1 agonists), similar weight loss, and similar reductions in blood pressure.

With these promising results, Amylin, Eli Lilly, and Alkermes, the companies involved with the development of Bydureon, submitted an application (called a New Drug Application or NDA) to the FDA asking for approval to sell the drug in the United States. Submission of an NDA is required for all new drugs in the United States and includes all of the laboratory and clinical trial data that the company has gathered for the drug since its discovery. The FDA then reviews this data for up to 1o months to determine whether the benefits of the drug outweigh the risks. If the benefits are determined to be greater, the FDA can choose to approve the drug. If the FDA is unsure, it can send the company what is termed a complete response letter, which lists the additional studies and information it would like to have before making a final decision. After the requested material is supplied, the FDA usually has six months to decide whether to approve the drug or offer another complete response letter. For more information on the FDA and the drug approval process, please see the Learning Curve in diaTribe issue #16.

Excitement ran high last week as the FDA was expected to give its decision on Bydureon for use in the United States. Actually, the FDA responded a first time to the companies in March 2010, issuing a complete response letter asking for additional information on the manufacturing process and the product information sheet that would be provided with the drug to patients and physicians. While disappointing, what was encouraging was that the FDA appeared satisfied with all of the data for Bydureon as no new trials or laboratory studies were requested. As a result, many, including us at diaTribe, had expected Bydureon to gain approval this second time around, especially given the promising results indicated above and the apparent lack of notable safety concerns. But the FDA decided to issue Amylin, Eli Lilly, and Alkermes another complete response letter, this time asking for an additional study examining the cardiovascular effects of elevated exenatide levels and data from DURATION-5, another clinical trial comparing Bydureon to Byetta. On this latter point, the FDA’s rationale is clear: a slightly different formulation of Bydureon was used in the first Byetta and Bydureon head-to-head trial, DURATION-1, than would be sold in the US. This new formulation was tested in DURATION-5, and though the companies had provided data previously comparing these two formulations, the FDA wanted confirmation that the new and old formulations behaved the same way.

It is less clear why the FDA is requiring a specific cardiovascular study on higher-than-normal levels of exenatide, Bydureon’s active ingredient – we were quite surprised and disappointed by this news, which seems difficult to justify given other drugs on the market with similar questions that have been approved. Likely, the FDA is concerned about the effects that elevated levels may have on the hearts and kidneys of type 2 patients. Because Bydureon is cleared by the kidneys, any impairment to these organs can slow the removal of the drug and lead to higher-than-normal Bydureon concentrations in the body. From that perspective, the FDA’s request makes perfect sense. If high concentrations of the drug are harmful, individuals with renal impairment would be at risk for heart complications as they would be exposed to such concentrations for an extended period of time, given Bydureon’s naturally long duration of action and their body’s inability to remove the drug fast enough. However, the effects of Bydureon on the heart of individuals with mild to moderate renal impairment were already examined in a clinical trial for Bydureon, and no notable effects were detected. Additionally, the specific cardiovascular study requested by the FDA was carried out with Byetta, which also contains exenatide, and a negative effect on the heart was not observed. Finally, a range of studies in mice, rats, and monkeys has failed to demonstrate a negative effect of either Bydureon or Byetta on the heart.

Thus, it is very surprising and discouraging that the FDA has requested this data now, when many doctors and patients were excited about access to this new compound. Perhaps most frustrating is that the FDA had deemed the cardiovascular data in kidney impaired individuals from the DURATION-1 study adequate at the time Bydureon was originally submitted. So the FDA had the opportunity to ask for this study nearly seven months ago in the first complete response letter. We believe this exemplifies the FDA’s increasingly poor ability to communicate adequately and in a timely fashion, as its mission suggests it should. With Bydureon’s remarkable profile (nearly two points in A1c reduction, weight loss, much less nausea than Byetta, convenience of a once-weekly shot), we would have thought at least the FDA could have approved the drug in a population that did not include individuals with impaired renal systems, assuming this is the population in question.

Since 2008, the FDA has placed increasing emphasis on the cardiovascular safety of new diabetes drugs, arguing that these drugs should not increase the risk of cardiovascular complications when individuals with type 1 and type 2 diabetes are already at significantly higher risk for those complications. Notably, cardiovascular complications are the leading cause of mortality among individuals with diabetes. While this is certainly a reasonable concern, we view the FDA’s decision on Bydureon as excessive, given the lack of any signal for a cardiovascular safety issue and the amount of data already submitted. This decision is most disappointing for individuals with type 2 diabetes who are struggling to adequately control their blood glucose and that may have been greatly benefited by what we believe is a remarkable drug. Meanwhile, of course, without Bydureon on the market, millions will continue to be diagnosed with long-term complications who could have benefited from better drugs earlier in their therapy.

What next? Well, this is certainly not to say that the drug will never be approved. In fact, many in the diabetes community, especially researchers and doctors involved in studying the drug, appear confident that Bydureon will eventually gain approval. The companies have estimated that it may take until the end of 2011 to design, carry out, and submit the results of the requested cardiovascular study to the FDA. Following this submission, the FDA would have six months to review the data and decide again whether to finally approve Bydureon. Consequently, approval of Bydureon may not come until mid-2012. We’ll keep you updated!